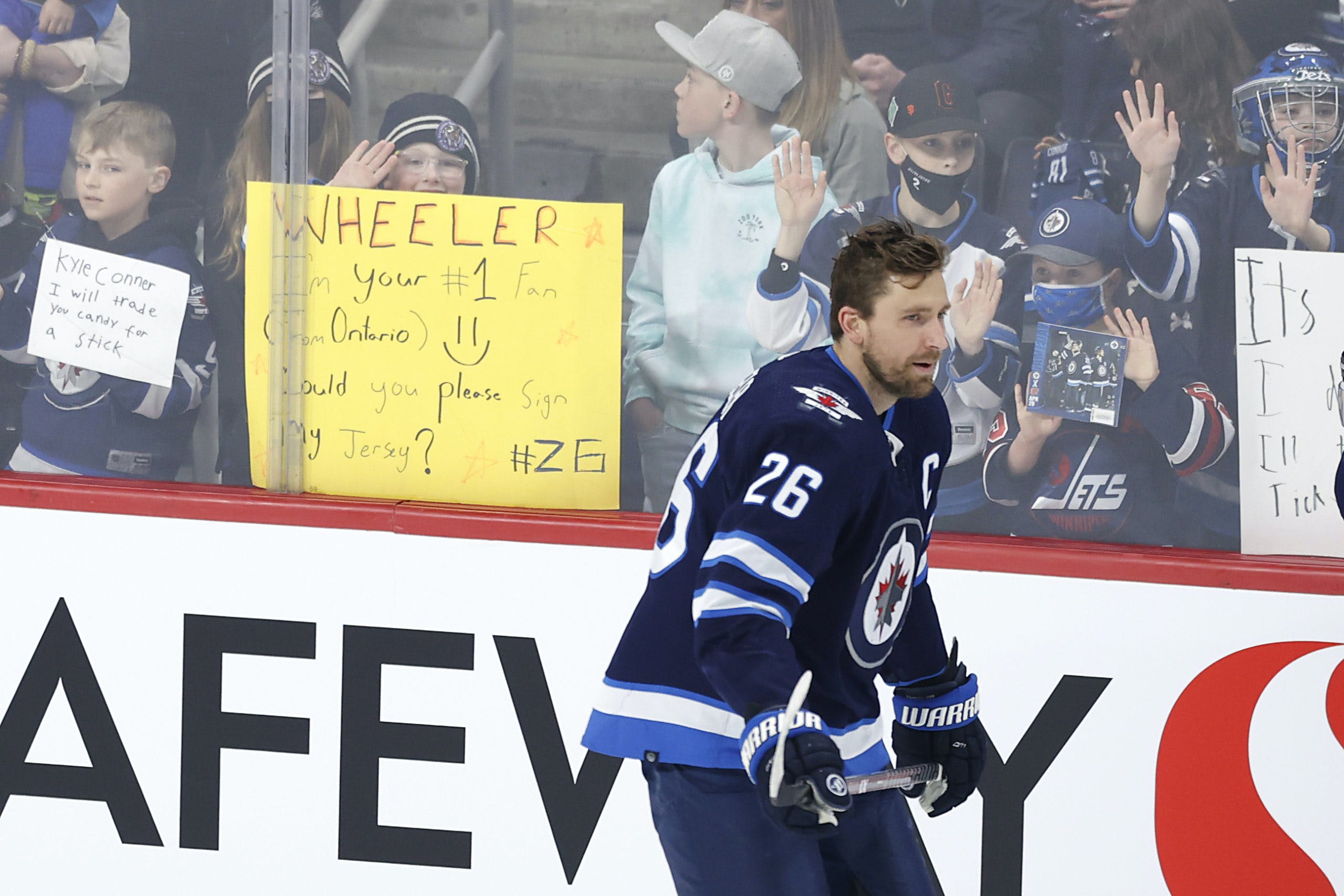 By Colton Davies
7 months ago
For any skater north of 30-years-old, a slow start can easily translate into a miserable season. And that’s exactly what Winnipeg Jets captain @Blake Wheeler endured to begin the 2021-22 season.
In one instance, he found himself on a 14-game goalless slump, in another, he battled COVID-19 and an undisclosed injury, as well. That rough patch lasted for a good portion of the first half, and then he eventually was able to sway himself back into a point-producing power forward.
Of course, back in 2017-18 and 2018-19, Wheeler registered consecutive 91-point seasons, where he also posted 20 goals during each campaign. Back then, we were accustomed to seeing him atop of the Jets’ scoring leaders. Unfortunately, that’s not the case anymore.
This season, Wheeler finished with 60 points (17 goals, 43 assists) in 64 games, missing the 20-goal mark for a second straight campaign. According to Natural Stat Trick, he possessed a 0.991 PDO, a 50.16 per cent Corsi For Percentage, a 50.17 per cent Fenwick For Percentage and a 49.15 per cent Expected Goals For Percentage (xG%) at 5-on-5.
What do those numbers tell us? That despite being 35, Wheeler still has some spark and magic left in his arsenal. He primarily played on a line with @Paul Stastny and @Mark Scheifele. Over 278:32 minutes of ice-time, they racked up 16 goals altogether and held a CF% of 49.5 per cent. If Wheeler can find that type of chemistry again early on next season, the veteran should be able to carve out a decent performance.
Overall, Wheeler holds the franchise record for total assists and points, putting up 511 assists and 757 career points respectively. He’s just 18 games shy of tying the all-time record for most games played in Jets 2.0 history, @Bryan Little holds the current record at 843.
Wheeler also got to celebrate his 1000th NHL game this season, an achievement that only one other player in Jets 2.0 franchise history has achieved, Stastny. Having veteran leadership in the locker room is an extremely important component of building a franchise. His hard work and dedication to the craft don’t go unnoticed. He’s a very likable player throughout the team and city of Winnipeg, and is often looked up to by fellow players.
“Every player sees that and understands the sacrifice, the work, the dedication to the game that it takes,” said Jets defenceman @Josh Morrissey. “You have to be a good player for a long time in order to do that. It’s one of the greatest accomplishments in our game.”
Recently though, Wheeler was critical of not only himself but his teammates and what they weren’t able to accomplish this past season – in what’s been self-described as a complete failure. When asked about the Jets’ flaws from this year, he took the blame, “Well, I think I would have to take responsibility for that,” he said when asked about the club’s struggles. “It’s been my job to build the culture here and I’ve taken a lot of pride in that over the years. So I certainly look in the mirror on that one, and where we’ve gotten to, and the team that we were and the team that we are now. I don’t hide from that at all. I certainly take the responsibility for where this team sits.
“Hopefully we have a locker room full of guys doing the same thing. Like I said, I’ve tried to build this into something we can be proud of, something that can be a championship level every year. And when you fall short of that you’ve got to take responsibility for it.”
Despite being critical, Wheeler also expressed he believes the Jets are still a good hockey team but are no longer contenders. That’s a pretty valid assessment of his franchise.
“We can no longer call ourselves contenders,” Wheeler detailed. “I think we are one of those teams that is a fringe playoff team now. It’s up to everyone involved to look in the mirror and say, `Why? Why did we get to where we’re at?’ Like I said, first and foremost, it’s our responsibility as players to bring that type, that quality of play to the ice that we have a chance to contend and compete for a championship.”
Now is the time for action, the Jets have already made coaching changes by not bringing back interim head coach Dave Lowry and assistants Charlie Huddy and Jamie Kompon. If the team wants to find success next season, some major roster changes will have to occur. Wheeler is sure to be involved in a lot of critical decisions over the off-season.
Is now the time for the Jets to part ways with their longtime captain? Or do they offload a different player – possibly someone like Scheifele – to shake up the culture and find success?
These are the questions that’ll need to be answered by general manager Kevin Cheveldayoff and his staff in the coming months.