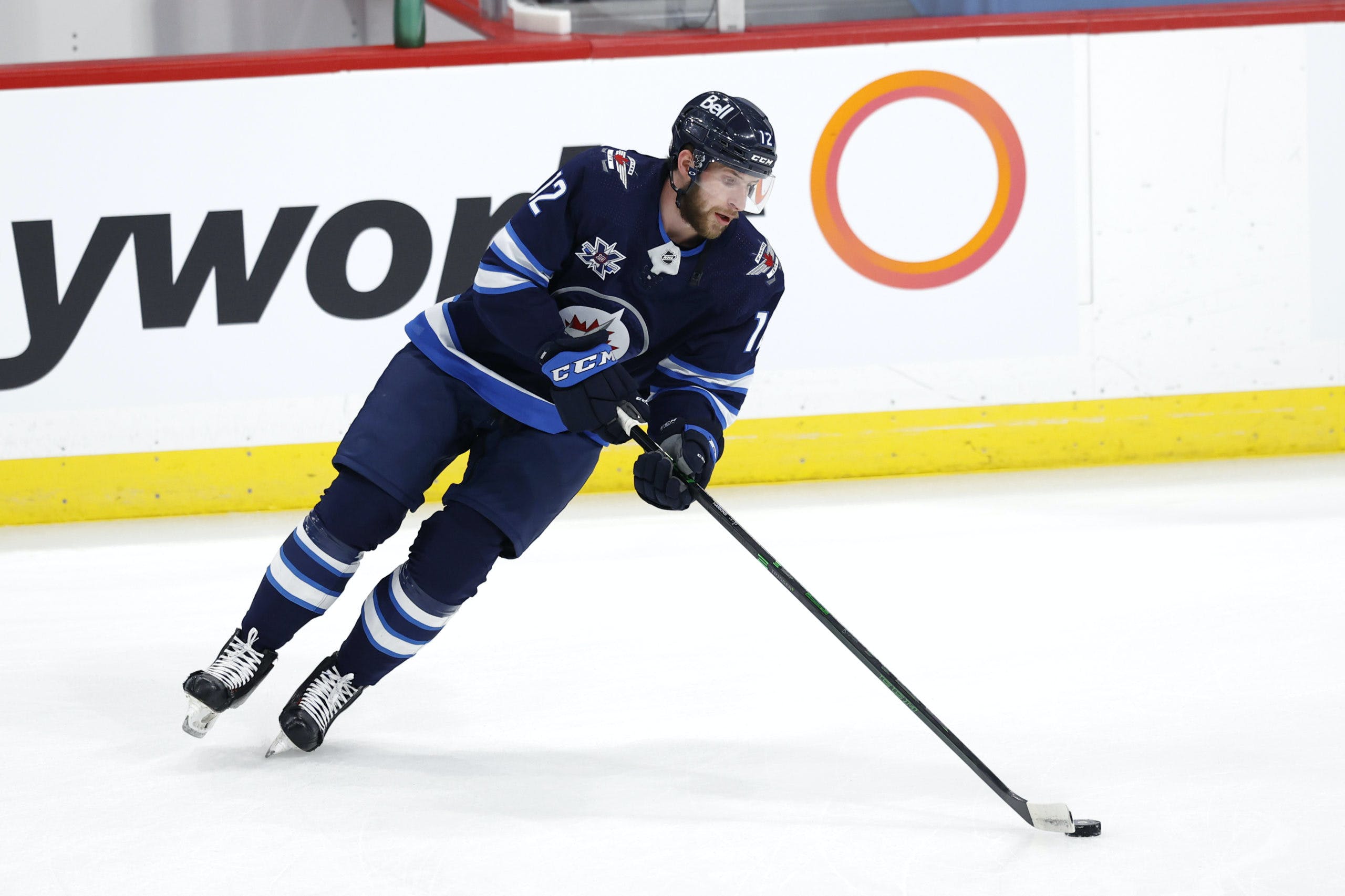 By Thomas Hall
1 year ago
With coach Paul Maurice at the helm, younger skaters have historically struggled to crack the Winnipeg Jets’ lineup on a regular basis, however, all of that could change for the better next season with this team up against the salary cap and seemingly unable to complement the roster with veterans from outside the organization.
Since players like @Nate Thompson, @Trevor Lewis and @Mathieu Perreault all departed through free agency this off-season, this club’s bottom-six forward group is expected to become significantly younger in 2021-22, especially since the front office only has approximately $4.5 million in cap space, according to PuckPedia.com, and still needs to re-sign restricted free agents @Andrew Copp and @Neal Pionk.
Needing some internal forwards to emerge into key roles, there’s a very high chance @Kristian Vesalainen and @Jansen Harkins will become full-time players when they report for training camp this fall. Though each of them will obviously need to earn those positions, it’s difficult to envision a scenario where both skaters don’t surpass their single-season games played totals during this upcoming season.
As for Harkins in particular, the 24-year-old will have plenty to prove in his third NHL season as his two-year, $1.45 million contract is set to expire next off-season, allowing him to become a restricted free agent who’ll gain arbitration eligibility for the first time in his young career.
After bouncing in and out of the lineup over his first two NHL seasons, the 6’2″ forward is expected to receive an opportunity to compete for the fourth-line center job, likely forcing him to battle against teammates @Dominic Toninato and @Riley Nash for that position. But considering he was utilized up the middle at times in 2020-21, resulting in a career-best 61.1% faceoff percentage through 18 opportunities, the Ohio native may have the inside track to this competition.
Even if Harkins isn’t positioned at center next season, he’ll still likely play an important role on the Jets’ fourth line, although his duties will probably come on the wing rather than in the middle of the rink.
With Thompson and Lewis both playing elsewhere in 2021-22, Maurice and his staff will be tasked with locating two new forwards to make up the team’s second penalty-killing unit, potentially opening the door for the former second-round pick to occupy one of those two spots. While he’s never killed penalties at the NHL level, this could be an opportunity for him to prove he’s capable of more than just providing some offense in a bottom-six role.
Granted, Harkins’ on-ice metrics weren’t impressive last season, as he posted a 43.8% CF percentage, a 43.9% FF percentage and a 39.1% xGF percentage, according to NaturalStatTrick.com, but he was playing alongside two aging forwards in Thompson and Lewis, and only participated in 26 games. So these concerning results probably need to be taken with a grain of salt.
Assuming the left-hander earns a spot on Winnipeg’s penalty kill, paired with his fourth-line role, chances are he’d likely average closer to 10:00 minutes of ice time per game, which would be a considerable improvement from the 8:24 minutes of ice time he averaged per game in 2020-21.
Given the inconsistent playing time Harkins has dealt with since making his NHL debut in 2019-20, it’s understandable that he hasn’t registered more than three goals and nine points over 55 career games. But if he were to play upwards of at least 60 games next season, there’d be a much higher possibility of him finally being able to replicate his results from the AHL, where he scored 27 goals and 82 points over 156 career games.
While Harkins won’t become eligible for unrestricted free agency until after the 2023-24 campaign, the 2021-22 season could arguably be the most important performance of his professional career, as it’ll likely determine how the next two years of his profession play out.
If he outperforms his expectations and enjoys a breakout performance, odds are the young lefty will be rewarded with a two-year contract extension next summer. But if he can’t stay healthy or proves to be ineffective, which seems to be an unlikely outcome as of now, then his part-time role may remain the same throughout his entire tenure with the Jets.
Uncategorized
Recent articles from Thomas Hall