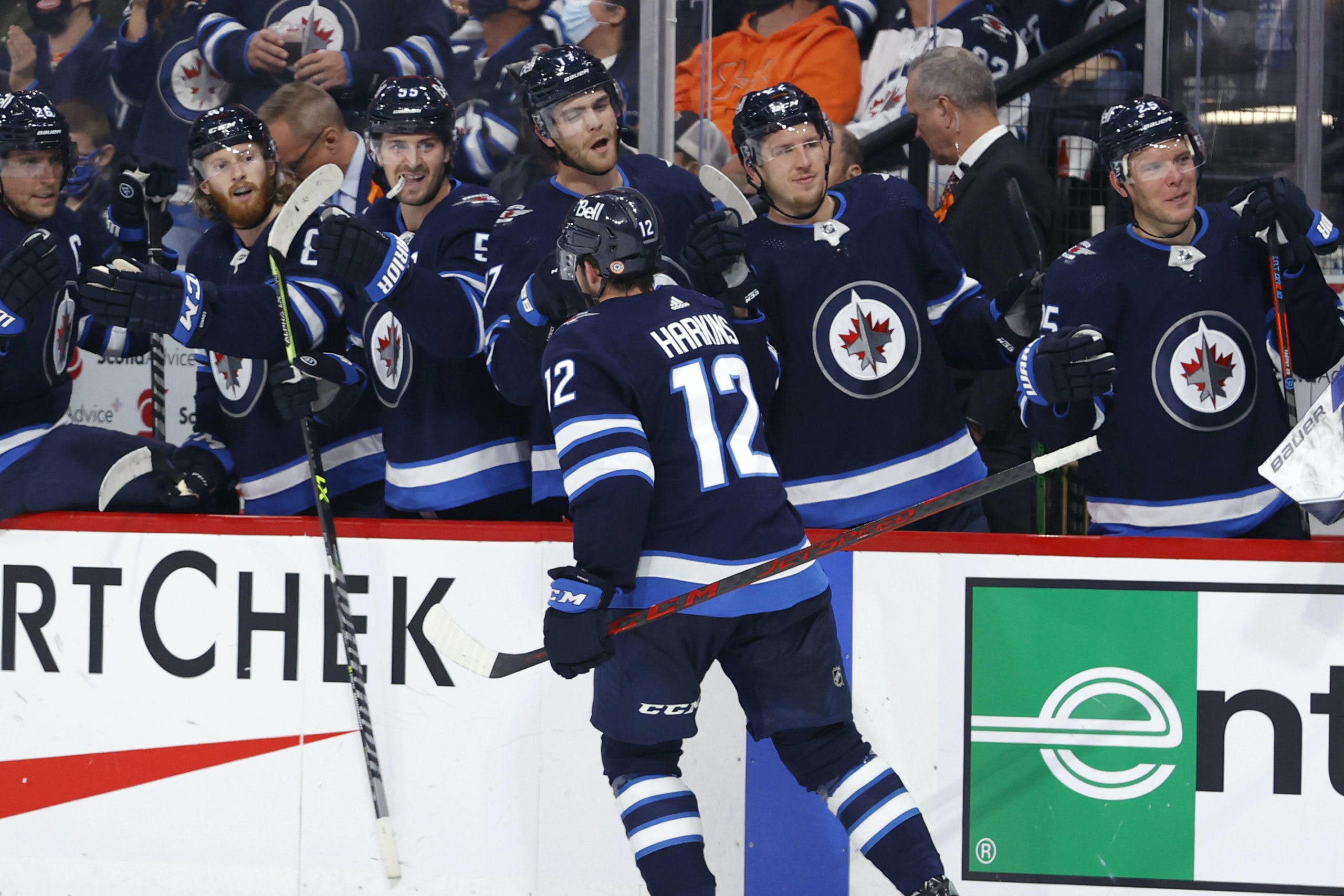 By Thomas Hall
1 year ago
Following two weeks of training camp, the Winnipeg Jets will conclude their pre-season activities Friday night, but first, they’ll be tasked with finishing off their home-and-home series against the Calgary Flames.
With puck drop set for 8 pm CT, the Jets will be looking to earn their third victory of the pre-season, which would see them finish 3-3 through six exhibition contests. More importantly, they’d head into the regular season on a two-game winning streak thanks to a series sweep of the Flames, making for a true celebration before meaningful games begin.
On a more serious note, this final matchup of the pre-season will serve as one last showcase for any skaters competing for a roster spot in the National Hockey League. In particular, there are a handful of players on this club who’ll be looking to leave a lasting impression on the coaching staff, especially @Cole Perfetti, @Ville Heinola, @Dominic Toninato and @Evgeny Svechnikov.
As for what to watch for during this Friday night showdown, here are three skaters fans should keep an eye on throughout this contest:

Though forward @Jansen Harkins, who’s enjoyed a very strong camp, has already seemingly secured a roster spot, he still deserves to be highlighted during Friday’s game as he’ll be positioned on the Jets’ top line alongside @Kyle Connor and @Mark Scheifele.
With captain @Blake Wheeler receiving the night off, his absence from the lineup has created an open spot on the right wing, and thanks to his impressive performance, the coaching staff has decided to award Harkins with some well-deserved first-line minutes during this pre-season finale. Regardless of what transpires, no one should be expecting the 24-year-old to remain in the top six moving forward, still, it’ll be fun to watch how he performs.
Serving as one of the club’s key forces up to this point, the left-hander has posted two goals, five points, eight shots on goal, seven high-danger scoring chances and has won seven of his 10 face-off opportunities through five games, according to NaturalStatTrick.com.
Additionally, he’s also registered nine hits, two takeaways, one block and has drawn a team-high five penalties.
Once the regular season begins, Harkins is expected to occupy a consistent role on Winnipeg’s fourth line, potentially alongside @Riley Nash, Toninato or Svechnikov. But for now, he’ll look to ride high on the top line against Calgary.

Ok, so while it’d be fantastic for Perfetti to break camp with the Jets, it seems pretty unlikely for that outcome to come to fruition, at least, as of now. Having said that, the coaching staff has made it clear they currently view him as a borderline NHLer, meaning he still has something to play for on Friday.
Even though the highly-touted first-round pick appears destined to start this season with the Manitoba Moose, an opportunity in the NHL will undoubtedly come his way at some point over the 82-game schedule. With a quality performance to conclude the pre-season, the talented left-hander could cement himself as the first forward who’s recalled in case of an injury.
While Perfetti hasn’t racked up many points in exhibition action, one assist to be exact, he’s been at the center of several scoring opportunities throughout his three appearances. In turn, he’s generated an on-ice 57.6% CF percentage, 54.9% FF percentage, 61.4% expected goals rate and a 71.4% HDCF percentage at 5-on-5 during that span.
At least to begin the contest, Perfetti is slated to be skate alongside @Adam Lowry and @Paul Stastny, but with just 11 forwards dressed, there’ll likely be multiple different line combinations through the night.

Now for one of Winnipeg’s most prized possessions, Heinola, who’s still attempting to surpass veteran @Nathan Beaulieu on the depth chart as the team’s seventh defenceman. Unfortunately, it’s difficult to envision a scenario where that happens before the regular season opens, but hey, it can’t hurt to try.
Since the Jets are planning to dress seven defensemen Friday, including @Brenden Dillon, @Neal Pionk, @Nate Schmidt, @Dylan DeMelo, @Logan Stanley, Beaulieu and Heinola, playing time could potentially be hard to come by for the few blueliners who aren’t expected to be apart of the opening day lineup.
With that in mind, it’ll be vital for the Finnish native to make the most out of every opportunity he receives, during both 5-on-5 and power-play situations. At the very least, the left-hander should be able to continue to showcase his stellar puck-moving ability, which this lineup could certainly benefit from regularly.
Despite already having his fate seemingly decided, the best thing for Heinola will be to focus on what’s in front of him and deliver another quality performance, which will hopefully set him up for a strong 2021-22 showing – whether that’s in the NHL or AHL.
Uncategorized
Recent articles from Thomas Hall