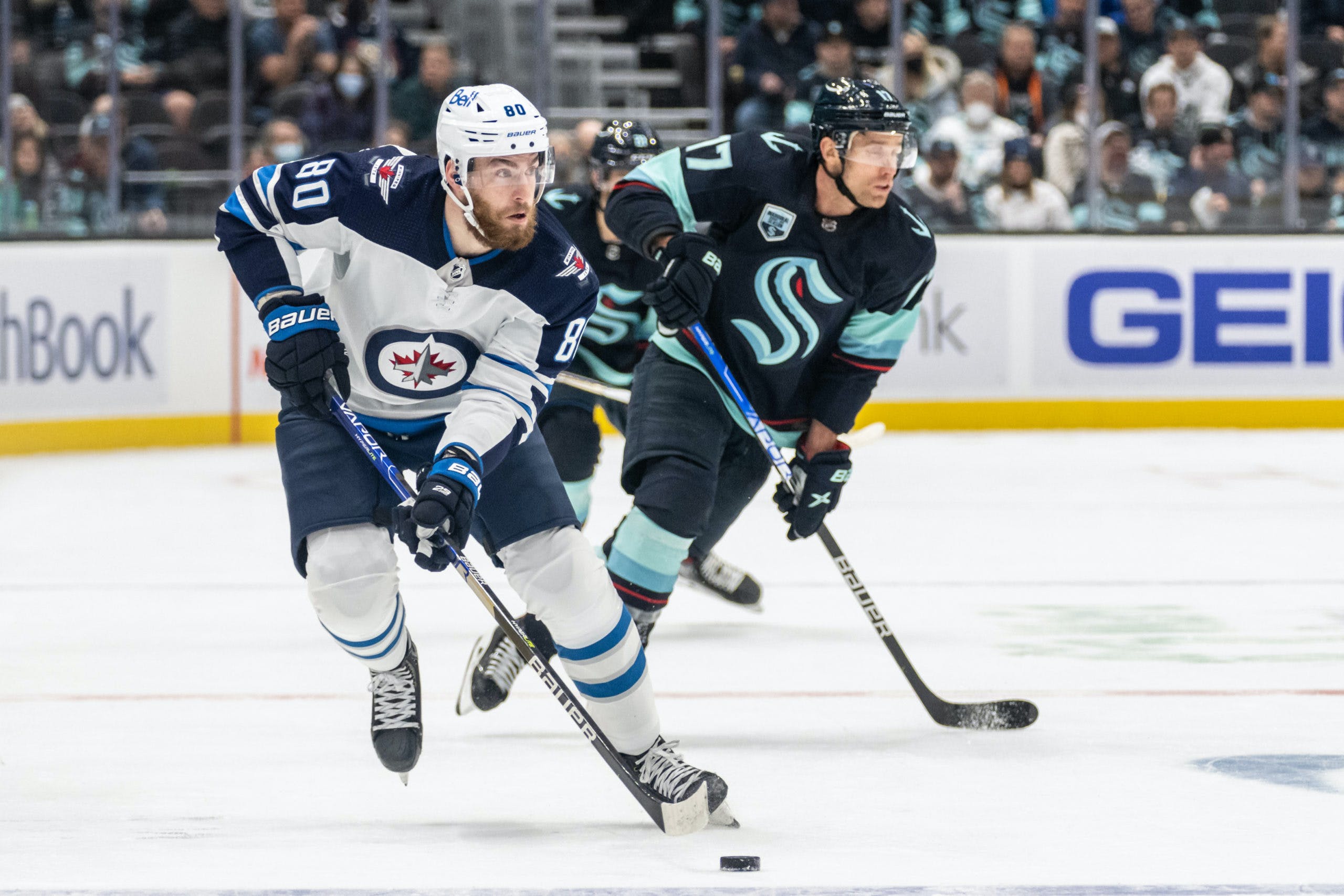 By Thomas Hall
7 months ago
All but one game remains in the 2021-22 season, which will see the Winnipeg Jets host the Seattle Kraken to wrap up the regular season.
While the rest of the league either begins the off-season or prepares for the Stanley Cup Playoffs, the Jets will look to provide its fans with one final quality showing at Canada Life Centre. If successful, they’ll extend their winning streak to four straight games. That’d be their first of that length since October 2021.
Either way, regardless of the outcome, an intriguing summer lies ahead for this franchise. For a roster that underperformed this season, some notable subtractions could be made by the front office, both on and off the ice.
For a preview of this contest, let’s explore three skaters to watch as Winnipeg and Seattle conclude the campaign.

Last Game: Two shots on goal, two hits, 17:35 minutes
During what’s been a strong bounce-back season, centre @Pierre-Luc Dubois is set to play his 81st game of 2021-22, where he’ll look to add to his 28 goals and 59 points on the campaign.
Though he was held scoreless last game, the impending restricted free agent was reunited with his former Cape Breton teammate, @Evgeny Svechnikov. As a unit, Svechnikov – who enjoyed prior success with Dubois and @Kyle Connor earlier this season – helped complement the club’s explosive dynamic duo. It’s anyone’s guess as to why this trio was split up in the first place.
Now that they’ve been paired together again, however, this combination could be poised for a strong performance against Seattle. In all likelihood, they’ll use this final contest as another example to prove they deserve to remain together heading into next season.
For Dubois, in particular, he’ll look to finish strong before turning his focus to the off-season, where he’s expected to face a major decision regarding his next contract.

Last Game: One goal, six shots on goal, 17:51 minutes
There’s no way around it, the 2021-22 campaign has seen captain @Blake Wheeler continue to decline during his age-35 season. But with one game left, perhaps the veteran forward has enough gas in the tank to finish on a positive note.
After all, he has scored a goal in three straight games coming into Sunday.
In Friday’s 3-1 victory over the Calgary Flames, Wheeler registered his 16th goal of 2021-22, surpassing last season’s total of 15. Considering he’ll be positioned next to teammates @Nikolaj Ehlers and @Paul Stastny, his chances of extending his scoring streak are fairly high.
Not to mention, this could potentially be Wheeler’s final game with the Jets. If management desires to turn over some of the roster, they’d be tough-pressed not to look in the captain’s direction.

Last Game: Four hits, one block, 15:03 minutes
Nearing the end of his first NHL season, defenceman @Dylan Samberg has quickly proven himself worthy of competing at the highest level, earning him a regular spot on Winnipeg’s blue line.
Due to his success, which has seen him post a 52.4 per cent Fenwick For Percentage and a 55.3 per cent Expected Goals For Percentage at 5-on-5 since Apr. 8, the 23-year-old has recently occupied a top-four role next to @Neal Pionk. This promotion has allowed his craft to grow even stronger.
Preparing for his 15th career NHL game, Samberg will be expected to remain productive during the season finale against the Kraken.