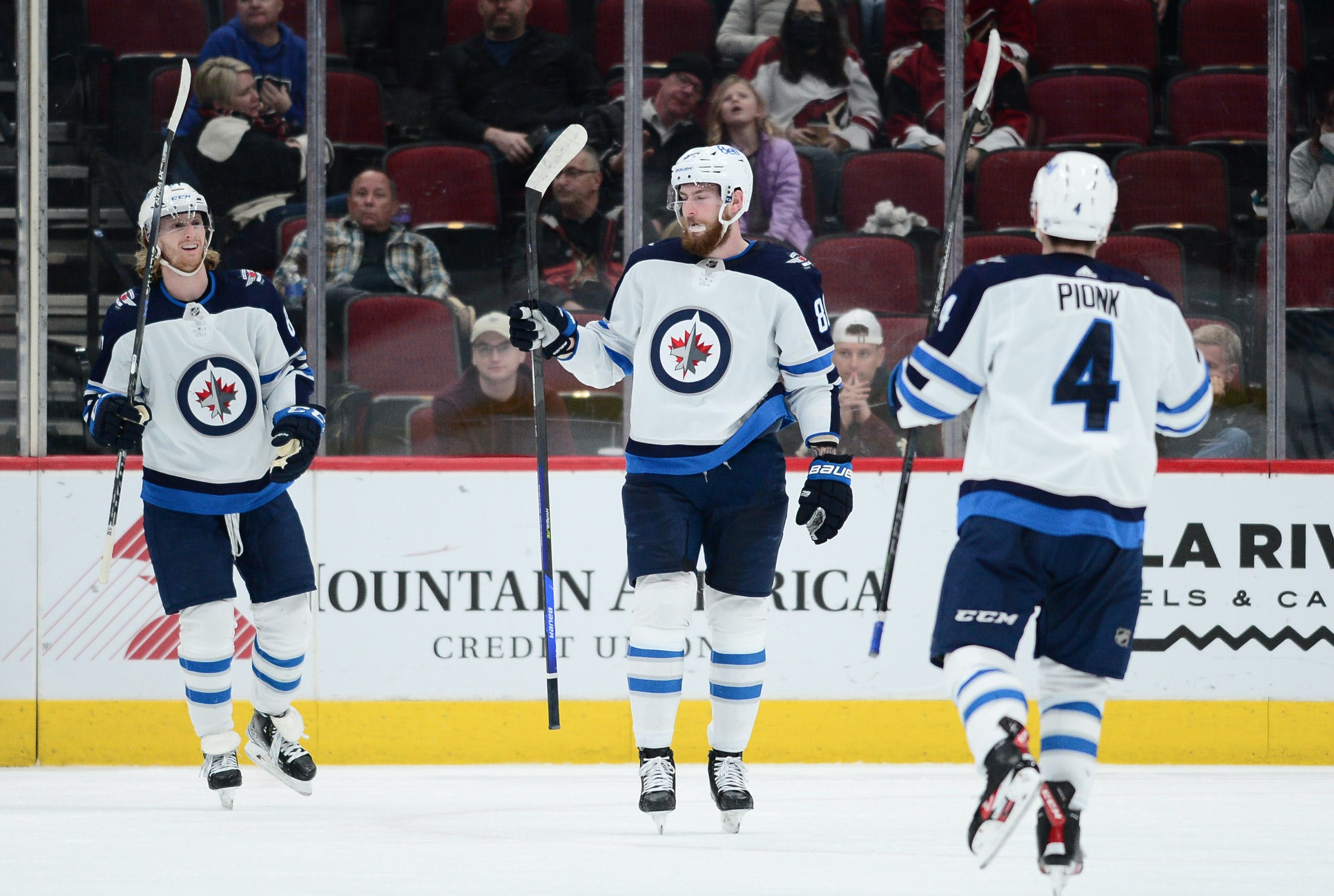 By Thomas Hall
11 months ago
After capturing consecutive wins for the first time in nearly a month, the Winnipeg Jets were searching for a third straight victory under interim head coach Dave Lowry on Tuesday, but first, they needed to exact some revenge against the Arizona Coyotes.
Back on Nov. 29, the Coyotes came into Canada Life Centre and shut out the Jets by a score of 1-0 – it was one of their most frustrating losses of the season. This time around, they made sure to break through against rookie goaltender @Karel Vejmelka, who earned his first career NHL shutout during that previous meeting.
Concluding the first period on a high note, defenceman @Josh Morrissey claimed a loose puck in the neutral zone and carried it over the blue line on the attack. Then, the 26-year-old blueliner quickly found teammate @Evgeny Svechnikov across the ice and sent a pass his way, which he one-timed home for the game’s opening goal.
Across the midway point of the middle frame, with Winnipeg still leading 1-0, centre @Pierre-Luc Dubois perfectly applied Lowry’s message of driving to the net as he did exactly that as the power play expired. Though his initial backhand shot was stopped on the red line, the power forward refused to surrender on the play and shovelled the puck across the rest of the way.
While defenceman @Shayne Gostisbehere trimmed Arizona’s deficit to just one goal early in the third period, however, an empty-net score from @Nikolaj Ehlers – his first of 2022 – ultimately sealed this contest late in regulation, earning his team a 3-1 victory.
For an extended recap of this matchup, here are three takeaways from the second of four meetings this season between the Jets and Coyotes:

Among the many strengths that Dubois features, one of his most notable skills is causing havoc in front of the opposing team’s net and luckily for Winnipeg, that exact skill set was on full display Tuesday in Arizona.
Through all three periods, the 6’3″ forward was seen making a handful of effective drives to the net, largely resulting in his four high-danger scoring chances, according to NaturalStatTrick.com. In the second period, he was able to convert on one of those chances, which earned him his 15th goal of 2021-22.
With @Mark Scheifele cycling the puck down low, where Dubois positioned, the former Columbus Blue Jacket made a strong move towards the net in an effort to create a quality scoring chance. Since there was an open lane in front, the left-hander skated in with the puck on his backhand and snuck his shot under Vejmelka’s left arm.
Despite a spectacular goal-line save from @Anton Stralman, Dubois forced his stick through a scramble, pushing the puck across the red line for the score.
Thanks to this marker, which proved to be the game-winner, Dubois snapped his three-game pointless streak and continued his impressive performance during his second season with the Jets. On the year, he now possesses 15 goals and 26 points through 32 games – that’s seven more goals and six more points than he registered over 41 games in 2020-21.
Not too shabby for No. 80.

Heading into this showdown, Ehlers’ three-game point streak – that consisted of two goals and seven points – came to an end Sunday against the Vegas Golden Knights. While it was far from easy, the 25-year-old started a new streak in Arizona one night ago.
Even though the Danish star ended up with an empty-net goal, before that moment came, he endured some pretty unfortunate puck luck for most of the contest. Throughout the night, it seemed like the left-handed winger was destined to score at least a few times, especially since he finished with six shots on goal – tied for most on the team.
And yet, nothing bounced his way all game long.
Most notably, Ehlers’ best scoring chance of the night came in the third period, where Scheifele sprung him on a clear breakaway attempt. But as the reliable scoring threat skated into the slot, forward @Clayton Keller came out of nowhere and effectively lifted his stick, neutralizing the scoring chance.
Just at 5-on-5 alone, the former first-round selection posted four of his overall six shots on goal, with three of them resulting in scoring chances. While he only received 1:12 minutes of ice-time on the power play, which is an issue of its own, No. 27 still found a way to produce a scoring chance from the wing.
That being said, if there’s one area to improve on, it’d be for Ehlers to focus on creating additional chances around the net as he only registered one of the high danger variety against the Coyotes.

Vejmelka, which sounds like the name of a James Bond villain, may play for one of the worst teams in the league, in the Coyotes, but he’s quickly starting a rivalry between himself and the Jets.
By now, everyone is well aware of the 25-year-old’s 46-save shutout that occurred back on Nov. 29. While he didn’t hold his opponent off this scoreboard this time around, that didn’t prevent him from proving to be a frustrating adversary all night long.
In total, Vejmelka stopped 46 of his 48 shots against, 30 of which came at 5-on-5. Additionally, the 6’4″ netminder only allowed one high-danger goal – Dubois’ marker – making nine saves from in-close areas.
Among the many quality saves the former fifth-round pick made, and there were a ton of them, the ones that stood out the most were probably a pair of one-timers from Scheifele and @Kyle Connor that resulted in some highlight-reel stops.
Here’s the one from Scheifele (Video courtesy of Bally Sports Arizona):
And here’s the denial on Connor’s one-timing attempt:
Luckily for Winnipeg, they won’t be seeing any of Vejmelka or Arizona again until the end of February. So, at least there’s that.
Uncategorized
Recent articles from Thomas Hall