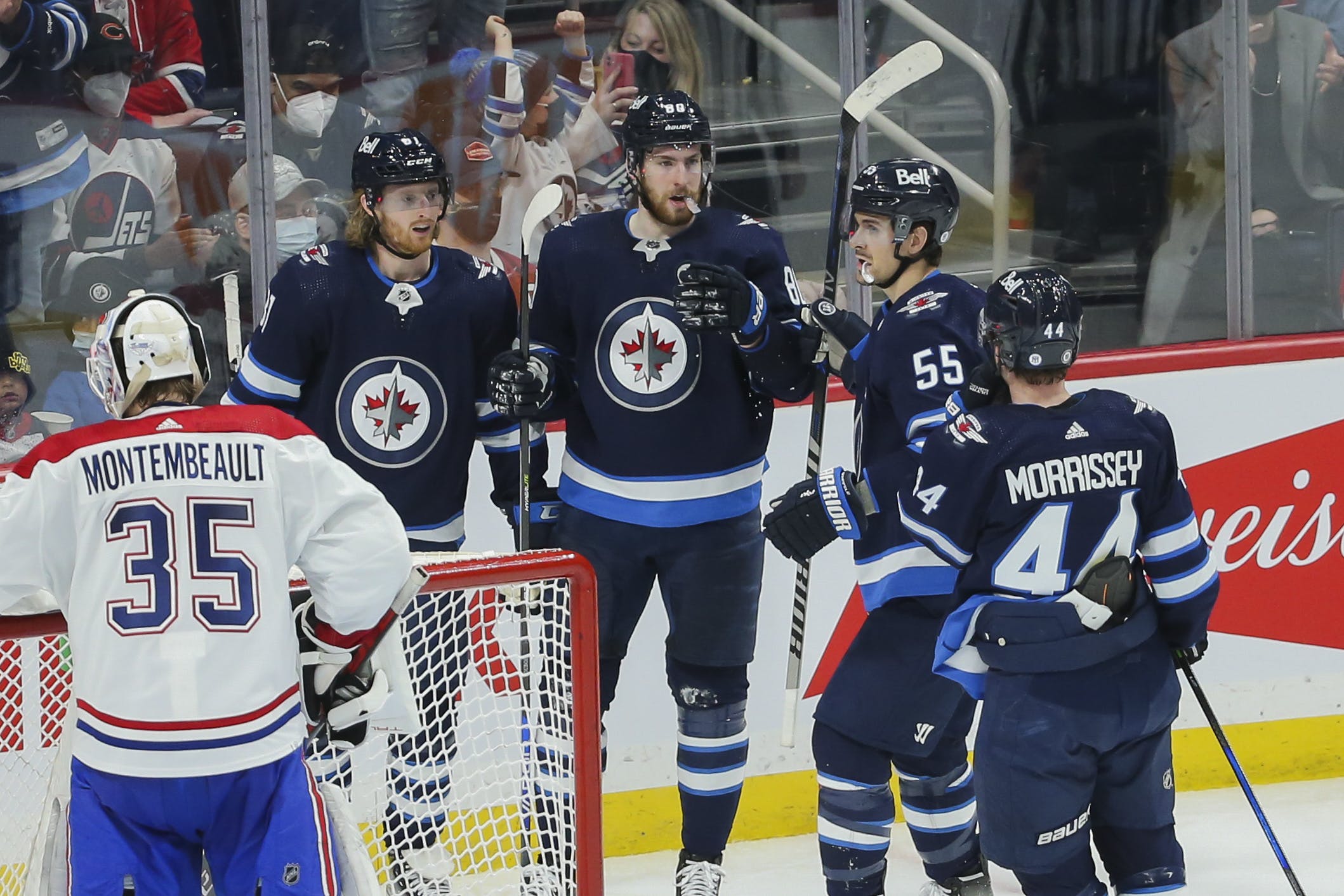 By Thomas Hall
9 months ago
Coming off a 5-3 victory over the Arizona Coyotes, the Winnipeg Jets were aiming to continue their winning ways against the Montreal Canadiens and though it was far from an ordinary game, they still accomplished their primary goal – earning two points.
Setting the tone early on, the Jets came out firing and looked determined to control this matchup from start to finish, although their rapid four-goal lead evaporated very quickly before the first period concluded. After allowing a trio of unanswered goals, these two clubs entered the first intermission with seven total goals scored, leaving everyone in attendance gasping for air.
With both teams trading markers in the middle frame, thankfully, Winnipeg regained its one-goal advantage before the horn sounded for the second intermission. In the final 20 minutes, however, they rattled off three straight scores to put them ahead 8-4 – a lead they wouldn’t squander a second time.
As for which players stood out during this heart-pounding thriller, here are the three stars of the game from the Jets’ 8-4 victory:

Stat Line:
One goal, three points, six shots, 19:07 minutes
Performance:
Needing to capture a second straight victory, the Jets were counting on their top players to lead the way and when it came to centre @Pierre-Luc Dubois, nothing more could’ve been asked of him from the coaching staff during this high-scoring affair.
Making an immediate impact, Dubois won a huge offensive zone face-off before dumping off the puck to begin a cycle, which quickly resulted in forward @Evgeny Svechnikov’s third goal in as many games. Then, just over 30 seconds later, he cycled the puck up to the blue line, where defenceman @Nate Schmidt blasted home his team’s second marker of the game.
Scoring a goal of his own later in the night, the 23-year-old cashed in on one of Winnipeg’s six power-play chances, registering his 22nd marker – and first since Feb. 12 – of the season.
Without Dubois’ efforts, outlasting Montreal’s offensive surge would’ve likely been far more challenging, especially in the opening frame.

Stat Line:
Three goals, four shots, 17:39 minutes
Performance:
Acting as Montreal’s leading offensive force Tuesday, forward @Josh Anderson made a huge impact on the scoreboard in his club’s losing effort, registering his first career hat-trick.
With the Canadiens trailing 4-0 midway through the opening frame, they badly needed to grab some of the momentum back from the Jets, and Anderson did exactly that by scoring a pair of goals less than six minutes apart. Then, at the 4:08 mark of the second period, the 27-year-old completed his team’s comeback effort, registering his third goal of the game.
Though his strong showing wasn’t enough to earn the victory, the 6’3″ forward certainly did enough to earn recognition as one of the top performers on the night.

Stat Line:
One goal, two points, two shots, four hits, 10:10 minutes
Performance:
Few skaters have been as effective as Svechnikov lately and though some viewed him as unplayable earlier this season, he’s been anything but that recently.
Entering Tuesday’s contest on a two-game goal streak, the 25-year-old made quick work of extending that stretch even further, scoring his third goal in the last three games just past the five-minute mark of the first period. Adding to his outstanding evening, the 6’3″ forward executed a perfect handoff with Dubois from behind the net, ultimately resulting in Schmidt’s fourth goal of 2021-22.
Following another impressive outing, Svechnikov has now produced three goals and five points since Feb. 25, including a pair of multi-point performances. If this recent stretch can’t convince Winnipeg’s coaching staff to keep him alongside Dubois and @Kyle Connor long-term, not much will.
More from Jets Nation:
Uncategorized
Recent articles from Thomas Hall