2021 Stanley Cup Playoffs – Round 2: Three Storylines Heading into Game 1 of Jets vs. Canadiens 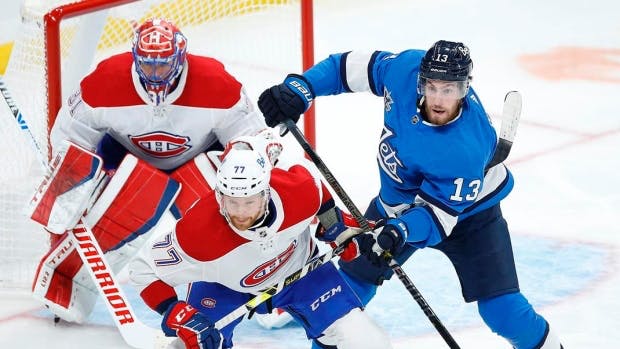 By Thomas Hall
1 year ago
After sweeping the Edmonton Oilers over a week ago, the Winnipeg Jets will finally play their first game since May 24 and will be looking to pick up exactly where they left off in the opening round, as they begin this second-round series against the Montreal Canadiens.
While regular season metrics can essentially be thrown out at this point, it’s worth noting that Winnipeg won six of the nine meetings against Montreal earlier this season, with three of those victories coming in overtime. Even though this will be the first time these two organizations have ever faced each other in the playoffs, there’s no question this series should be extremely entertaining for both sides, especially since these two teams were considered underdogs in the first round.
Here are three storylines that could impact the first game of this playoff series between the Jets and Canadiens:

Following a rocky performance in the regular season, the Jets were hopeful forward @Pierre-Luc Dubois could replicate some of his impressive results from last season’s playoff bubble, where he scored four goals and 10 points in 10 games, although he could only muster up two assists in the opening round. Despite posting seven hits and three blocks, the 22-year-old was largely ineffective against the Oilers and must find a way to become more productive in this matchup against the Canadiens.
Considering Dubois excelled against Montreal during the regular season, as he scored two goals and six points through nine games, it seems there’s a fairly strong chance he’ll be able to bounce back offensively in round two. But if his woes continue, then the onus will likely shift to Winnipeg’s third line, featuring @Adam Lowry, @Andrew Copp and @Mason Appleton, needing them to pick up the slack and help generate consistent offense throughout this series.

Despite performing to a disappointing .901 save percentage and a 2.64 goals-against average in the regular season, goaltender @Carey Price has done an excellent job at flushing those troubling metrics and has returned to his dominant form this postseason. Frustrating the Toronto Maple Leafs in the opening round, the 2014-15 Vezina Trophy winner posted a 2.24 goals-against average, .932 save percentage and was clearly the MVP throughout the seven-game series.
Since Price played a massive role in upsetting the Maple Leafs, it’ll be crucial for the Jets to generate plenty of action in the offensive zone and prevent him from taking over this contest, which will undoubtedly be easier said than done. Based on how the Canadiens defended in the first round, where they forced everything to the outside, it’ll likely become extremely difficult to create scoring chances in the slot, meaning this team must position themselves in front of the net and will need a few lucky bounces to fall in their favor.

Unlike in the regular season, Winnipeg has defended extremely well in the playoffs up to this point, which has taken an enormous amount of pressure off goaltender @Connor Hellebuyck. While the 2019-20 Vezina Trophy winner has made some key stops when needed, he wasn’t required to carry this team past Edmonton in the first round, ultimately helping him record a stellar 1.60 goals-against average and a .950 save percentage through those four contests.
Aiming to advance to the third round, the Jets could put themselves in a position to succeed if they’re able to continue defending effectively around Hellebuyck and also limit the number of turnovers allowed in the defensive zone. Building on this game plan, if this team can spend significantly more time in the offensive zone through all three periods Wednesday night, chances are the two-time All-Star could enjoy a fairly quiet performance in Game One.

The puck will drop at 6:30 pm CT and be available on CBC/SN along with 680 CJOB.
Uncategorized
Recent articles from Thomas Hall