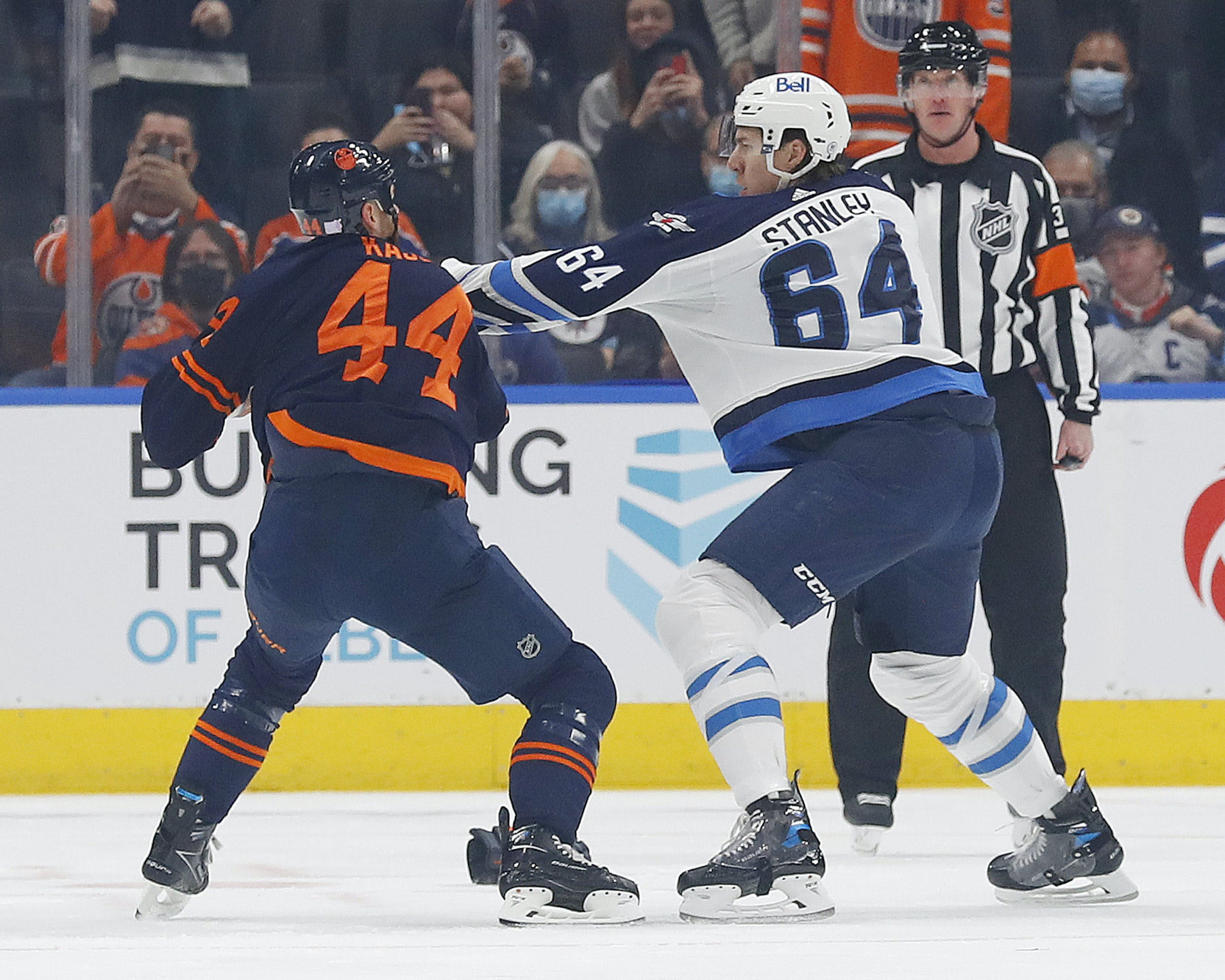 By Angus Hout
1 year ago
The Winnipeg Jets and Edmonton Oilers played each other twice last week, splitting the series in even fashion. Let’s face it, that was some pretty exciting hockey to watch for a Tuesday and Thursday night in mid-November.
If you watched either of those games, it felt like playoff hockey. It was gritty and featured fast-paced hockey. As a guy who grew up loving the Oilers and now writing about the Jets, I could see both sides of the nation getting some of you citizens heated with one another.
In October 2018, this whole notion that “Winnipeg doesn’t have an airport” started. At first, it was harmless and dumb, especially since three of the teams in this city have something to do with aviation.
Since then, this joke has lived on and well in Edmonton. Logically, you would’ve expected OilersNation to back down from this after getting swept out of last season’s playoffs. But oh no, they’ve doubled-down on said joke over these last few years. Thanks to Cam Lewis for one of the first examples of this drama-filled situation.
Looking at the on-ice rivalry that has picked up in recent years, the Oilers have largely been foiled by the Jets ever since @Connor McDavid joined the National Hockey League. I remember nights where old @Dustin Byfuglien would be all over McDavid all game long, making his night a living hell. Glad to see nothing has changed with @Neal Pionk in that department.
The Jets probably started this rivalry when they beat the Oilers in the playoffs last season, where they outscored them 14-8. Afterwards, it was fun throwing shade at their fans and reminding them that while they might possess one of the best players on planet earth, Winnipeg proved to be the better and luckier team at the end of the series.
Dating back to 1997, when the Atlanta Thrashers came into existence, the Jets/Thrashers’ current record against the Oilers is 20-22-2 along with one tie as well, according to NHL.com. Since McDavid joined the NHL in 2015, the record between these two teams, including playoffs, is 15 Wins for the Oilers and 15 for the Jets. So it’s split down the middle every way you look at it.
This has been the perfect storm for two teams to hate on each other throughout all of these years – what a wild ride it’s been.
Edmonton may feature the two best players in the world right now, in McDavid and @Leon Draisaitl, although they also haven’t done anything since 2006, when they advanced to the Stanley Cup Finals but lost in seven games. They have wasted more young skill in the last 15 and a half years than I can count. They mostly rely on just two players to do most of the work, as they’ve combined to score 63 out of their 150 total player points this season.
The Jets have a much deeper team, their top two scorers are @Kyle Connor and @Pierre-Luc Dubois, who have registered 38 out of the 132 total player points in 2021-22. Based on these factors, it’s clear the Oilers have been a slightly worse overall team since the Jets 2.0 arrived.
Edmonton’s organization loves to relive the glory days of the 1980s, where they won four of their five Stanley Cups. It feels like they have some sort of a banner night to remind everyone they were the best team 40 years ago. No cares anymore outside of Alberta, if you’re not winning cups now, it’s just embracing to watch.
Finally, this is my time to rip the city of Edmonton apart. I’ll start with something not many people think about, but there’s no actual oil in Edmonton. Sure, they refine oil in the city but they don’t drill anywhere near Edmonton. Lastly, where is your airport? Oh yeah, it’s 15 minutes outside of the city limits in Nisku.
Edmonton I left you and I have no regrets. Respect our airport. Most importantly, let’s hope the Oilers and Jets see each other once again in this year’s playoffs.
Uncategorized
Recent articles from Angus Hout