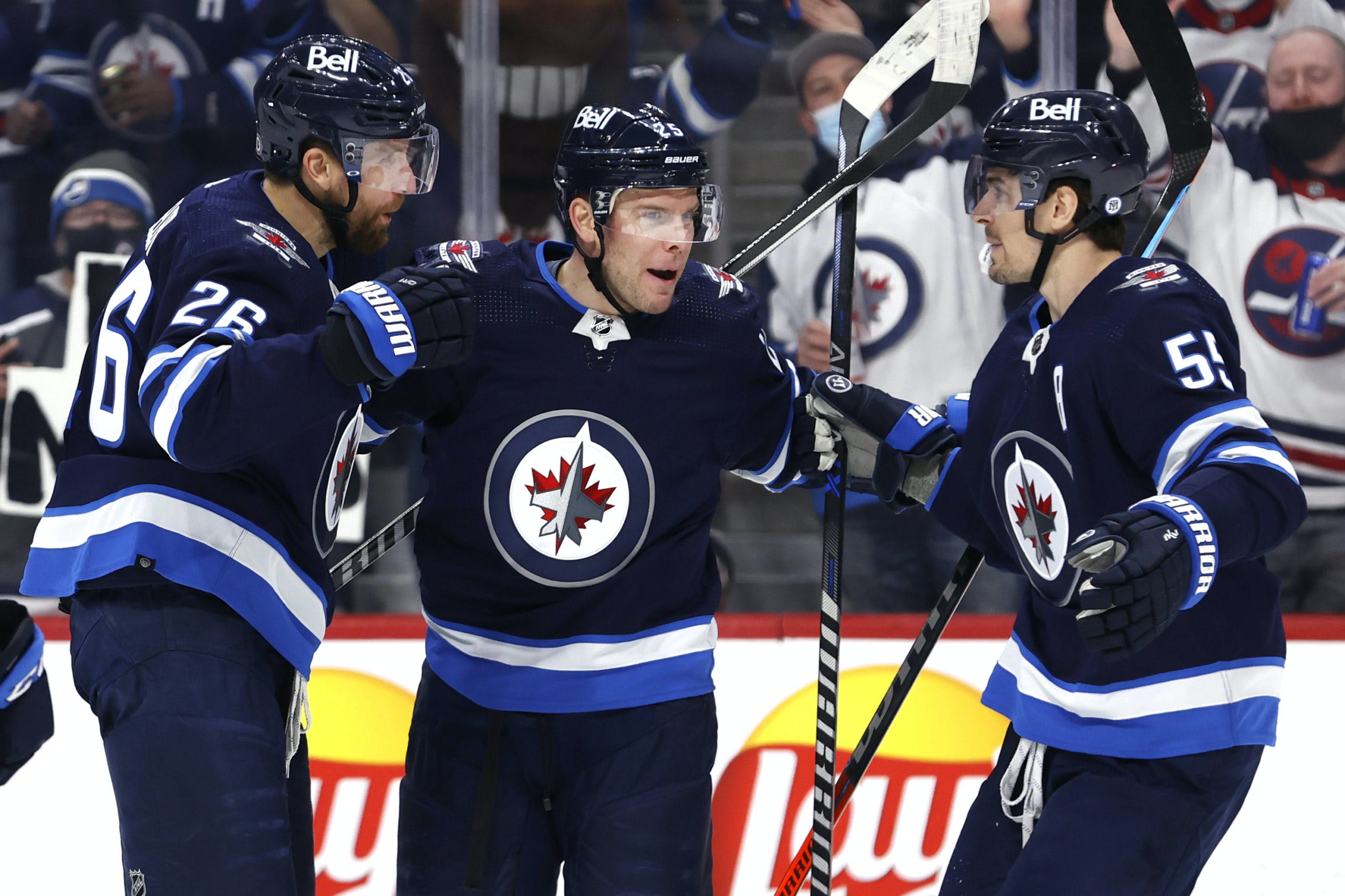 By Thomas Hall
7 months ago
After missing the playoffs for the first time since 2016-17, the Winnipeg Jets are facing a pivotal off-season in 2022, where they’ll likely be forced to make plenty of tough decisions.
The choices management makes over the next three-to-four months are expected to shape the immediate future of this franchise. Hence the importance of this summer. If the right moves are made, then this quick retool could result in a rapid turnaround next season.
For a fan base that was expecting to witness playoff hockey in Winnipeg this spring, returning to the post-season in 2022-23 is undoubtedly the organization’s main priority. To reach that goal, however, they can’t afford to commit any costly mistakes moving forward.
With that in mind, let’s dive into 10 burning questions the Jets need to answer over the off-season.

1. To Trade or Not to Trade Mark Scheifele?

Starting with the biggest conversation topic in Winnipeg: @Mark Scheifele’s future. The 29-year-old made headlines after the season finale by saying he must consider what’s best for his career before committing to stay with the Jets.
Of course, these interesting remarks came from someone who the fan base has repeatedly criticized for his poor defensive results. So it’s not like they’d be upset if he requests a trade. And with a $6.125 million cap hit through 2023-24, his deal is certainly moveable.
Scheifele’s contract does include a modified no-trade clause, allowing him to submit a 10-team list where he can’t be traded. Still, it might be in the best interest of both sides to part ways this summer.

2. What is Pierre-Luc Dubois’ Next Contract?

Coming off a sensational bounce-back performance, where he scored 28 goals (career-high) and 60 points, centre @Pierre-Luc Dubois is set to become a restricted free agent and has a massive decision to make regarding his future.
For the Jets, obviously, they’ll want to lock up the 23-year-old long-term, but that could be difficult. As someone that’s just two seasons away from unrestricted free agency, the 6’3″ forward could decide he prefers a short-term, bridge deal as opposed to something beyond that.
Either way, whether his next contract spans for just two years or more, Dubois is destined to receive a lucrative deal this off-season, and rightly so.

3. Who Should Jets Choose as Their New Head Coach?

With the interim status removed from Dave Lowry’s title, Winnipeg is expected to search for its next head coach along with several new assistants, as well. So who’ll be their next bench boss? That’s where the fun begins.
General manager Kevin Cheveldayoff has already stated he wants to receive input from his players before he starts interviewing potential candidates. But the fact remains that this team needs a leader that’ll hold everyone accountable, which is a crucial trait that appeared to be non-existent involving the 2021-22 staff.
If Bruce Boudreau is available, perhaps he’d be the perfect person to help lead this franchise in the right direction.

4. How to Handle Blake Wheeler’s Decline?

Set to enter his age-36 season in 2022-23, veteran @Blake Wheeler has fallen off considerably over the past few campaigns, which saw him fail to register the 20-goal mark for a second straight season. Perhaps it’s time to have a serious conversation involving his immediate future.
Let’s state the obvious, the 6’5″ forward is no longer the same skater that registered consecutive 91-point seasons from 2017-2019. But he can still provide value in a bottom-six role, that is, if he’s willing to transition away from the top six. If not, he’d probably be asked to waive his no-move clause.
Unlike Scheifele’s contract, though, Wheeler’s probably won’t be as easy to move. At $8.25 million per season through 2023-24, the Jets will likely be tough-pressed to locate an interested suitor without having to attach additional assets along with their captain.

5. Aside From Morrissey-DeMelo, What’s the Situation on Defence?

Without question, the pairing of @Josh Morrissey and @Dylan DeMelo stood out amongst an ineffective group this past season. As for the bottom-four mix, the front office will need to determine how to best assemble its remaining pieces.
Despite posting inconsistent results in 2021-22, @Neal Pionk will likely remain on the second pairing and since he seemed to form a solid connection with @Dylan Samberg down the stretch, it’d be worthwhile keeping them together to begin next season. That leaves a crowded bunch for the third pairing.
Between @Nate Schmidt, @Brenden Dillon, @Ville Heinola and @Logan Stanley, there’d be plenty of competition for those final two starting spots. Unless the Jets plan to carry eight defencemen next season, they’ll probably need to trade one of Schmidt, Dillon or Stanley.
Not to mention, a few talented prospects are already knocking at the door in @Johnathan Kovacevic, @Declan Chisholm and @Leon Gawanke.

6. Will More Youth Be Added to Winnipeg’s Roster?

In addition to making key decisions with veterans like Scheifele and Wheeler, management could also benefit from creating more opportunities at the NHL level for some of its top prospects, both at forward and on defence.
If not for the injury to @Cole Perfetti, he probably would’ve remained in a top-six role alongside Dubois and @Kyle Connor the rest of the way. Still, Perfetti isn’t the only top young forward in Winnipeg’s system as @David Gustafsson also appears ready for a new challenge.
As for defencemen like Samberg and Heinola, if Winnipeg trades a veteran blueliner this summer, both skaters could play significant big-league minutes in 2022-23. That’d certainly be a welcomed occurrence for this group.

After spending the last two seasons in Winnipeg, @Paul Stastny is set to enter unrestricted free agency once again and at 36-years-old, it stands to wonder if he’d want to sign elsewhere.
There’s no guarantee the Jets return to the playoffs next season. If Stastny hopes to make one final run at capturing a Stanley Cup, he could opt to sign a team-friendly contract with a legit championship contender.

8. Should Eric Comrie Be Re-Signed?

Another notable UFA is back-up @Eric Comrie, who fell just short of logging enough ice-time to enter restricted free agency. Though he didn’t see much action playing behind starter @Connor Hellebuyck, the Jets would be foolish not to bring him back.
In 19 games (16 starts), the 26-year-old performed to a very respectable 10-5-1 record, a 2.58 goals-against average and a .920 save percentage. Also, he earned his first career NHL shutout and served as the primary netminder throughout most of April.
Comrie featured a measly $750,000 cap hit in 2021-22, and based on his encouraging results, it’s probably safe to say he’s finally found a home in Winnipeg.

9. Will Adam Lowry Need to Change 5v5 Roles Next Season?

A valid question following what was a rollercoaster-type of showing from @Adam Lowry in 2021-22.
Understandably, the 29-year-old underwent an adjustment period after his father, Dave, took over as head coach mid-season. Nevertheless, scoring just three goals and eight points through his first 42 games just wasn’t good enough, especially for a third-line centre.
That said, Lowry did catch fire post-All-Star break, recording 10 goals and 13 points in 37 games. His defensive traits are undeniable, but if he can’t contribute offensively on a consistent basis, perhaps he’d be better suited on the fourth line.

10. Is a New Captain Coming to Winnipeg? Has He Already Arrived?

In Jets 2.0 history, there have only been two captains, Wheeler and @Andrew Ladd. The team placed a large ‘C’ on Wheeler’s chest prior to the 2016-17 season and he’s worn it ever since then. But as this franchise attempts to improve its culture, it might be time to change leaders, too.
On the surface, removing the captaincy status from Wheeler would be a delicate situation, especially if he isn’t traded. For many years, Scheifele was expected to eventually take over the position, although it appears unlikely that happens now. Meanwhile, a new leader has suddenly emerged in this regard, Morrissey.
Serving as an assistant captain over the previous three seasons, Morrissey carries a strong voice within the locker room and since he’s coming off a phenomenal showing, now might be the ideal time to pass the torch.