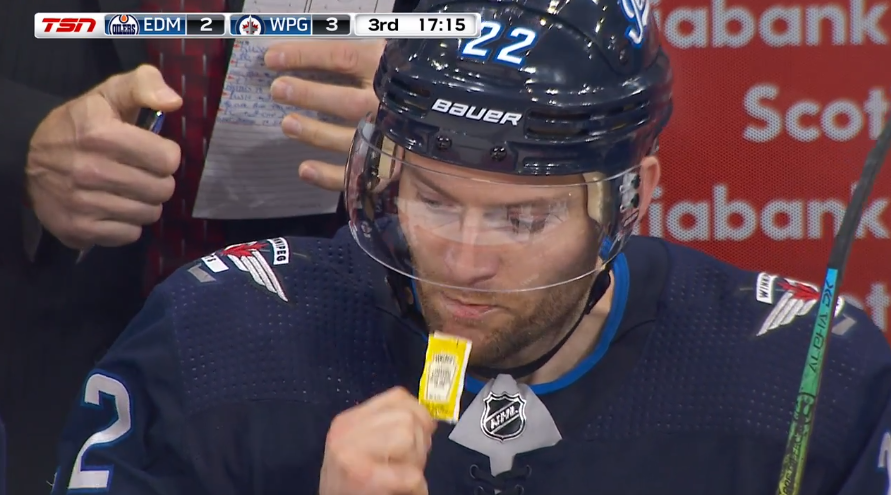 By Art Middleton
3 years ago
Comments
I’ve been a fan of hockey for 30+ years and I’ve never seen anything as strange as what I saw during the third period of the Winnipeg Jets 5-3 preseason loss to the Edmonton Oilers.
There was Jets forward Mark Letestu, sitting on the bench as one does between plays, resting up, looking around and asking for something to get passed to him. Maybe a bottle of water, maybe some tape or a towel…
Or a packet of mustard.
Yes, he really did eat a packet of mustard on the bench. Why?

Its a deconstructed hotdog. He's working his way through it between shifts.

Would that be like a reward system? Have a good shift, get a packet of ketchup. Make a nice pass, have some onions. Turnover the puck, eat the mustard.

sparks the production of a neurotransmitter called acetylcholine, which tells the muscles in your body to stop slacking off. It gets them to work harder, and because of that, it can help prevent leg cramps

Yup, that’s actually the legit reason.
Turns out mustard is fantastic in helping out with leg cramps which when you’re in just your third preseason game of the year and still trying to get those hockey legs under you, leg cramps would prove to be a serious issue.
Advertisement
Ad
Advertisement
Ad

honestly it doesn’t take much to surprise me anymore about hockey players doing weird stuff but like. what the fuck https://t.co/R9MMiyCK92

Agreed. But there was a lot more to this than just 10 seconds of eating mustard and I have questions. So many questions.
Let’s take a deeper look into this series of unfortunate condiments.

First we have the request for mustard and it was readily available which just raises even more questions. Is this a known thing for all NHL clubs, or just the Jets? Do all NHL teams have packets of mustard readily available? If so, why don’t we see this a lot more often? I feel like we’ve opened Pandora’s Box here. How many more NHL’ers do this? How deep does this rabbit hole go?

Did you catch that deep breath and exhale? That’s the sign of a man trying to psyche himself up to eat a packet of mustard. He knows what must be done. This is the sacrifice that professional athletes make. Kids, you want to make the NHL? Eat mustard.
Advertisement
Ad
Advertisement
Ad

You think he enjoys this? Look at that grimace. Who would actually enjoying straight up mustard?

I used to love plain mustard sandwiches as a kid.

Ok Sara, that doesn’t quite count. You’re taking away the effects of the mustard with bread. My best friend in high school Trevor used to love ketchup sandwiches with just two slices of bread and a ton of ketchup in the middle. I myself have been known to put straight up sugar on a slice of toast to cure my sweet tooth.
Almost anything with bread makes it slightly better.
So who would enjoy eating just mustard? A crazy person, that’s who. Does Mark Letestu look crazy to you?

Of course you have to wash that down. You just can’t have a mustard packet without a chaser of some sort, any good athlete knows that. What we don’t know right now is what flavor of Gatorade goes well with mustard? Cool Blue and Lemon-Lime would be my first picks, but Tangerine would probably be as effective. There is no way he’s drinking Glacier Freeze after that. You may as well just eat salt as well if that’s what you’re drinking.
Advertisement
Ad
Advertisement
Ad

Apparently it's good for cramps? Why is every condiment good for cramps? Looks like pregame meals should just be fully loaded cheeseburgers at this point. Phil Kessel was onto something https://t.co/4JeI43dHub

Seriously. I think we all owe Phil Kessel a heartfelt apology.
In the meantime, here’s hoping we see more NHL’ers chowing down on mustard packets. Mark Letestu has broken down a barrier tonight and now it should be acceptable for more mustard enthusiasts to be open about their leg cramp prevention techniques.