Advertisement
Ad
How To Cope Without Dustin Byfuglien 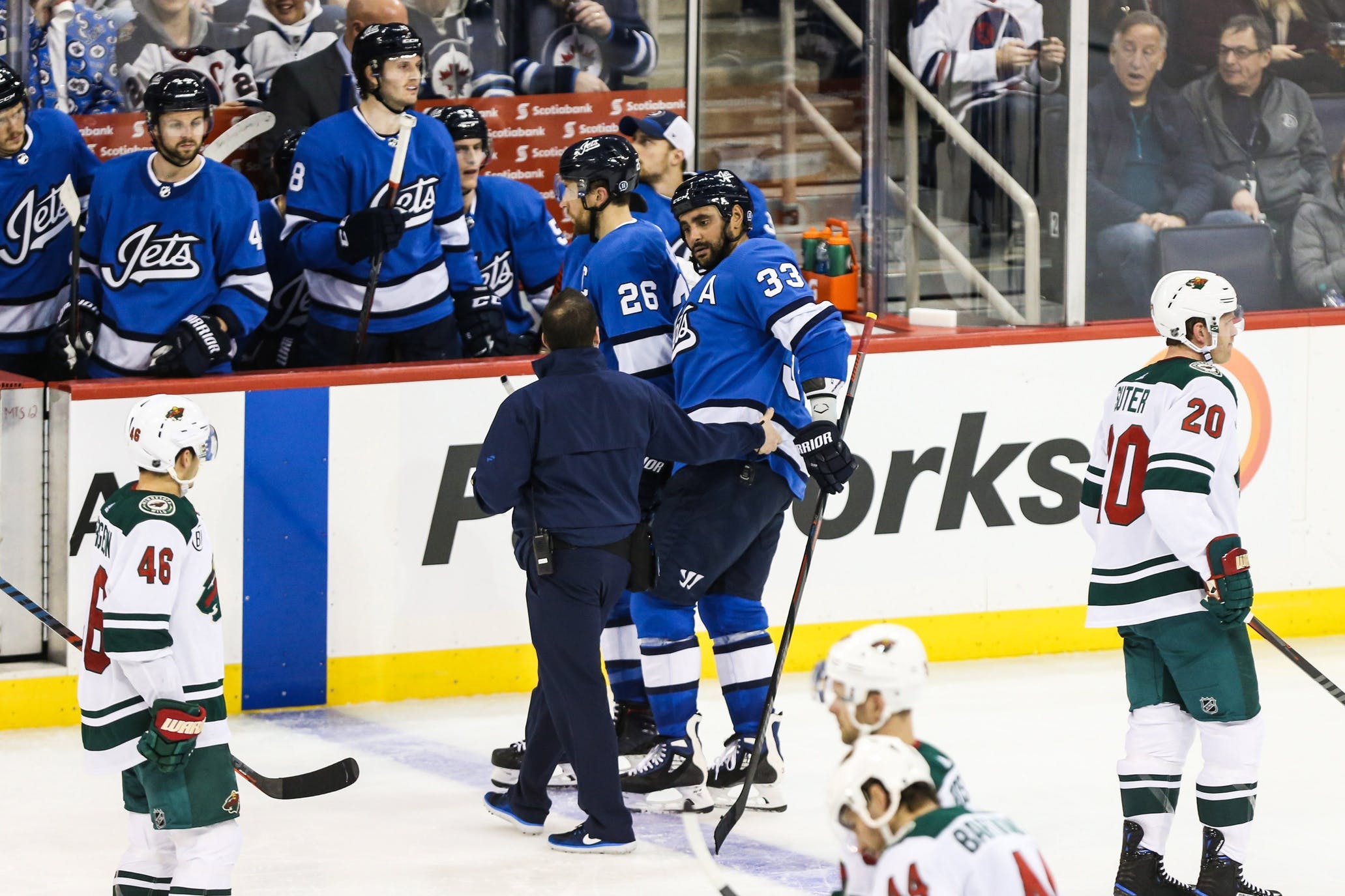 Photo credit: © Terrence Lee-USA TODAY Sports
By KB
4 years ago
Comments
The Jets were dealt a hefty blow in their loss against the Wild as Dustin Byfuglien went down with a lower body injury. At the time, it appeared that Byfuglien just rolled his ankle and might be fine in a few days. That clearly wasn’t the case as Maurice gave an update the next day saying Byfuglien will be out at least until the all-star break. With the NHL All-Star weekend happening January 26 and 27, it appears that Byfuglien is out for at least a month, potentially even longer.
The question now remains, how do the Jets deal with the hole left behind by Byfuglien?
Let’s take a look at some of the scenarios the Jets are contemplating to fill the void on the right side.

This is the likeliest scenario of the bunch. Ben Chiarot has historically struggled when paired with anyone but Dustin Byfuglien. This means that if someone else, likely Morrow, gets plugged straight into Byfuglien’s spot alongside Chiarot, that pairing is going to struggle. This is evidenced by the good old eye test, but it’s also backed up with some numbers.

#NHLJets fans are going to miss Dustin Byfuglien over the next several weeks.

Via Hockey Viz (and MS Paint), Ben Chiarot is going to miss him even more. pic.twitter.com/fRWRha4Yig

The best way to combat the struggle is to shelter the pairing by promoting Myers and Kulikov. If Trouba/Morrissey can play 25 minutes per night, and Myers and Kulikov can play around 22, then it leaves the third pairing of Chiarot and Morrow to play only 13 minutes. With Myers and Kulikov slowly rounding into form, this gives them the chance to prove themselves against tougher competition on a nightly basis.  While some might argue against giving Myers and Kulikov more ice-time, this is likely the best option without Byfuglien in the lineup.
Advertisement
Ad
Advertisement
Ad
Note: This solution also works if Niku plays instead of Morrow, but more on that later…

This option is less likely than promoting Myers and Kulikov but it still needs to get mentioned. If management believes that Chiarot is the second best left-hand defensemen, then it’s logical to keep him on the second pairing. Myers would move straight into Byfuglien’s spot and Kulikov would play with either Morrow or Niku.
This option would likely end in disaster given Myers and Chiarot’s history together. I ran the numbers over the past two seasons and both Myers and Chiarot have their worst CF% when playing together. If you like less advanced stats, Myers and Chiarot have been on the ice together for only three goals for, but six goals against. Having this option as the second pairing seems like a recipe for disaster.
Advertisement
Ad
Advertisement
Ad

The Jets are no strangers to injuries to their defense this year. Earlier in December, it was Byfuglien along with Kulikov, Morrow, and Morrissey who were all injured at the same time. During this period, the pairings got blended in a few different ways. It began with Morrissey and Trouba logging heavy minutes together with Chiarot and Niku as the second pair and Schilling and Myers on the third pairing.

Jets D chart via Jets media is different than what I had listed as projected:

We'll see how that rolls out but it would make good on Paul Maurice's suggestion of mentorship fron the NHL vets.

Niku also ended up playing a game with Trouba as Morrissey went down for a game as well. This idea of mixing and matching could work if the Jets split up Trouba and Morrissey to provide better coverage on all three pairings. If the Jets rolled Chiarot-Trouba, Morrissey-Myers, and Kulikov-Niku they would be able to use all three pairings as needed.
Advertisement
Ad
Advertisement
Ad
There is also a strong possibility that Maurice mixes the pairings throughout the game and it becomes a “committee” approach to filling Byfuglien’s gap.

The last idea is also the least likely to actually come to fruition. This idea is to promote Niku to a very similar role as Byfuglien. Put him on the second pairing with Chiarot and let him go to work. Give him some powerplay time and let him show you what he can do. In some ways, although it might sound silly, Byfuglien and Niku are similar players. Both are known for their offensive impact. They can transition the puck quickly and effectively whether that’s by passing or by skating up the ice. They also both take chances in the offensive zone while looking for the chance to strike.
Advertisement
Ad
Advertisement
Ad
An added bonus is that Chiarot is already comfortable playing with someone who has an offensive style. This would be the definitive test for Niku to see if he is ready to play in the NHL or not. Give him a stretch of four or five games with all the minutes he wants and let him prove his true value.
While my favourite option is letting Niku run wild in Byfuglien’s spot, Maurice is likely going to utilize Myers and Kulikov more and have Chiarot and Morrow on the bottom pairing.
How do you think the Jets should cover for Byfuglien? Should Myers be the man? Or Niku? Or something that I didn’t mention in the post? Let us know your thoughts in the comments below or on our Twitter feed!
Advertisement
Ad
Advertisement
Ad