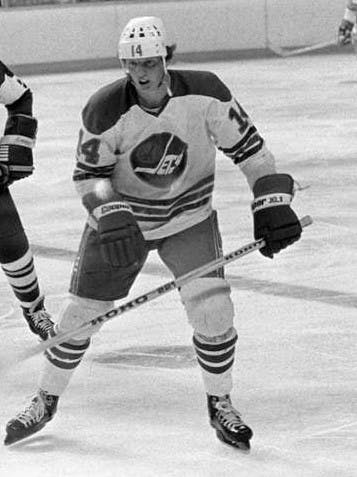 Whether discussing sports, music or pop culture, we’ve all heard an older relative, friend or co-worker casually mention, things were just different in the 70s. While my age makes it so I cannot speak to that directly, being a student of history makes me think they’re right. Imagine playing the world’s fastest and most physical game … without a helmet! I won’t even go on rollerblades without elbow guards, knee pads and wrist protectors, let alone play hockey at the highest level without a helmet. But things were just different back then. Beers in the dressing room and cigarettes on the bus, all in anticipation of the only night in Canada that mattered – Hockey Night. Allow me to introduce the other half of the Swedish Express –

Ulf Nilsson – 1/2 of the Swedish Express

Whether you call him the ‘Swedish Express’ or the middleman of ‘The Hot Line,’ you have to refer to him as one of the smartest players to have ever played in Winnipeg. Nilsson played 7 seasons in Sweden before hopping across the Atlantic Ocean to join the Winnipeg Jets in the WHA. Standing at 5’11 and only 175 pounds, Ulf Nilsson was never seen as the most athletic or talented player on-the-ice, but his teammates revered his work-ethic, competitive drive and fury incurred when he lost a single face-off in practice. In the 70s, there was an unfortunate rhetoric that foreign players were coming over to take the North Americans’ jobs. This led North American players to retaliate and punish European players on-the-ice. Constant slashing, cross-checking and blatant cheap shots were every night occurrences for foreign players. However, Nilsson’s mental toughness and grit were what was needed for this Swede to make the jump to the NHL and Nilsson and his ‘Swedish Express’ co-conductor never let the prejudice and abuse break them.
Nilsson hit the ground running the second he touched down at the Winnipeg International Airport. In his four seasons with the Jets, Nilsson averaged 121 PPG and never played less than 71 games-per-season. This points-per-game stat is eye-popping for the average player but to play four seasons and miss less than 10 games total in the most physical league in the world while dealing with constant, nightly abuse, makes this feat even more impressive. Further, Nilsson centered two of the most dangerous wingers in the world and made the sacrifices needed for them to be successful. There were times that each player touched the puck three times before scoring. Sharing in the sheer jubilation of winning, these plays were executed animosity or jealousy. This chemistry culminated into two Avco championships in 1976 and 1978 and a WHA Playoff MVP in 1976, where Nilsson tallied 25 points in 13 games. Doing the math, that’s 1.9 PPG in the playoffs! The only season where all three members of ‘The Hot Line’ did not average 100 points each was when Bobby Hull was sidelined with an injury in 1976. The regulars of Winnipeg Arena in the 70s would undoubtedly wonder how different their inaugural season in the NHL would have looked if the ‘Swedish Express’ wouldn’t have been strong enough mentally and physically to lead the journey.

General Manager Rudy Pilous was never afraid to make deals but shipping the ‘Swedish Express’ to the New York Rangers likely gave him nightmares. This broke ‘The Hot Line’ up and, while the Jets were able to capture the last Avco cup in WHA history, the damage was done. Pilous was terminated that season and replaced by John Ferguson Sr. Ironically, prior to being terminated and joining the Jets the following year, it was John Ferguson Sr who brought the ‘Swedish Express’ to The City that Never Sleeps the season before. In his first three seasons with the New York Rangers, Nilsson averaged 54 points in 53 games. He would go on to play only 10 more games in the NHL over the next three seasons, suggesting the physical demands of the WHA limited his NHL successes. After catching an edge in Madison Square Garden, the ‘Swedish Express’ was permanently derailed with a gruesome ankle break. Nilsson’s career carousel ended with the New York Rangers and a brief stint in the AHL and CHL. Nilsson joined his ‘Hot Line’ teammates for their 2016 induction into the Hockey Hall of Fame, where he cemented himself as a trailblazer for foreign NHL players and the city of Winnipeg.
Twitter: Jonesinthezone