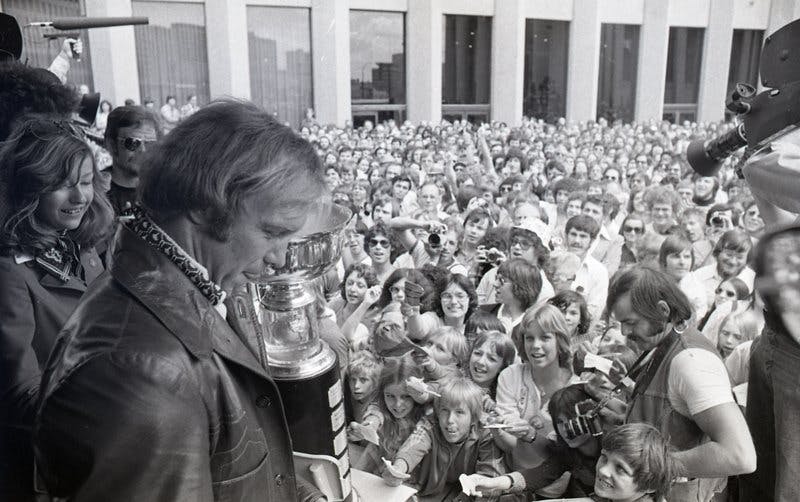 Whether discussing sports, music or pop culture, we’ve all heard an older relative, friend or co-worker casually mention, things were just different in the 70s. While my age makes it so I cannot speak to that directly, being a student of history makes me think they’re right. Imagine playing the world’s fastest and most physical game … without a helmet! I won’t even go on rollerblades without elbow guards, knee pads and wrist protectors, let alone play hockey at the highest level without a helmet. But things were just different back then. Beers in the dressing room and cigarettes on the bus, all in anticipation of the only night in Canada that mattered – Hockey Night. For anyone unfamiliar with Bobby “The Golden Jet” Hull, please allow me to introduce one of the greatest Winnipeg Jets of, not only, the 70s but all-time.

Hull’s professional path was as unique as his talents on the ice. Hull played two seasons in Ontario with the St. Catharines Teepees, which included ending his junior career with a 61-point season. After winning the Art Ross Trophy with 81-points in what was his third season in the league, Hull joined the Chicago Blackhawks and took the NHL by storm at only 18 years old. At 22, Hull led the Hawks to a Stanley Cup win over the Detroit Red Wings, averaging 1.16 PPG throughout the playoffs. The league was taken aback by Hull: he was an enigma. At over 100mph, Hull had one of the hardest shots in the league. “The Golden Jet” credits his strength to tossing 100-pound haybales on his father’s farm growing up. To put his forte into perspective, Victor Hedman recorded a 105-mph shot…40 years after Hull, when he was able to benefit from advancements in stick technology and sport science. What made Hull even more unique was that the best players in the early days of the NHL and WHA were either strong like Gordie Howe, fast like Howie Morenz, or had the scoring touch of Maurice Richard, but Hull had it all and the hockey world knew it.

The Jets take Hull up on his offer –

Hull was a force to be reckoned with both on- and off- the-ice. Beautiful blonde hair, movie star-like qualities and killer hockey instincts made him popular amongst his fans. With this, Hull began publicly announcing that he felt underpaid by the NHL and, when asked about playing in the World Hockey Association (WHA), Hull was quoted saying, “Tell ‘em if they give me $1 million up front, they’ve got themselves a hockey player.” Manitoba native and Winnipeg Jets owner, Ben Hatskin pounced on the opportunity to bring this big-name talent to the ‘Peg who, at only age 33, had over 1000 games and 1100 points on his resume. On June 27, 1972 that dream became a reality and Hull entered the WHA as a member of the Jets. Hatskin could not contain his excitement and organized a dramatic press conference worthy of only the Golden Jet, Hockey-movie-star, Bobby Hull. Thousands were invited to Winnipeg’s historic intersection at Portage and Main to watch Bobby Hull sign a 10-year contract for $2.75 million that included a $1 million dollar signing bonus. The crowd roared as Hatskin handed Hull a oversized gameshow-esque cheque. Unfortunately, not everyone was as thrilled to see Hull signed to the Jets. The NHL rigorously tried to block his move to the WHA and insisted he be excluded from the 1972 Summit Series squad. Luckily, instead of slowing Hull down, this snub likely added a needed extra chip to the winger’s already broad shoulders. Tied for the team-lead with 103-points in his first year, things only got better for Hull when the Super Swedes came to town. Together, Anders Hedberg, Ulf Nilsson and Bobby Hull became locally known as “The Hot Line.” This prolific trio combined for an ungodly 573 goals, 1,377 points and averaged 100-points each for three out of the four seasons they played together. These insane outputs catapulted Hull and the Jets toward capturing the Avco Cup in 1976 and 1978. June 27th will forever be a momentous occasion for Jets’ fans as, on that day, Hull legitimized Winnipeg as a team and the WHA as an organization.

Leading the Jets in their inaugural season, Hull would make his return to the NHL in 1980. Unfortunately, it was clear that his career was coming to an end so, that same year, the Jets let their “Golden Jet” soar to the Hartford Whalers, where he contributed minimally. The writing was on the wall. Although he later attempted a comeback with the New York Rangers, father-time finally caught up to the 24-year veteran. Hull ended his WHA/NHL career with 913 goals and 895 assists and as the first hockey player to be handed a $1 million dollar cheque in front of thousands of adoring fans. He will always be remembered as one of the greatest Winnipeg Jets. However, controversies that followed his career, including domestic assault charges and alleged anti-Semitic comments made to a Russian newspaper, have led some fans to question his appearances at alumni games and team events and make it difficult to celebrate everything-Hull. Despite this, his on-ice performance for Winnipeg undoubtedly changed the 70s for Jets’ fans, the team and the WHA.
Twitter: Jonesinthezone