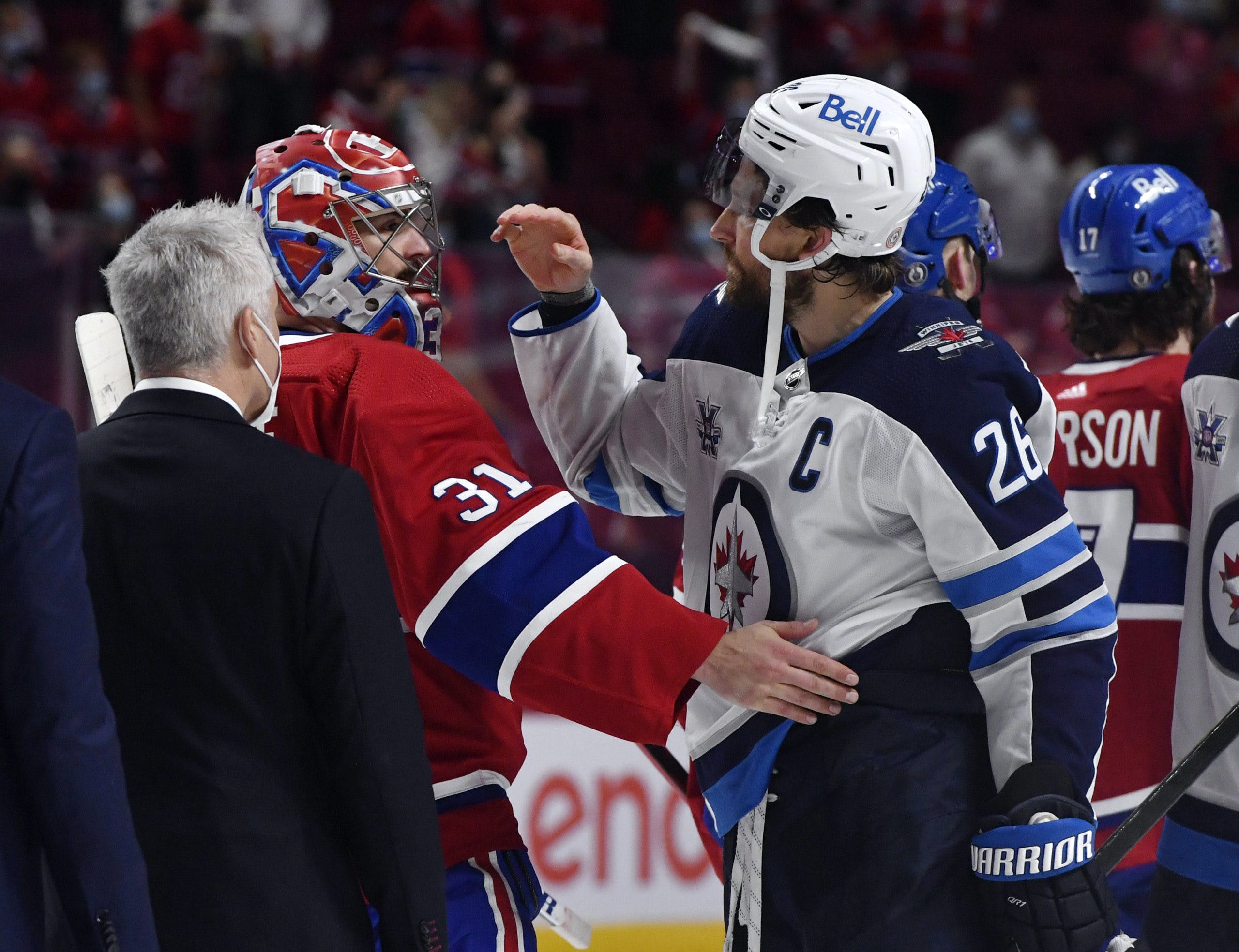 By Thomas Hall
1 year ago
Heading into an elimination game, the Winnipeg Jets were searching for any kind of offensive production in hopes of extending their season beyond Game Four of this second-round series against the Montreal Canadiens, unfortunately, their efforts to accomplish that feat came up just short.
Despite allowing a pair of goals in the opening 20 minutes, rookie @Logan Stanley put this team on his back in the second period by scoring his first two career playoff goals, tying this game up at two goals apiece heading into the final frame. But with zero goals scored in the third period, this contest required overtime, although it didn’t last for very long as forward @Tyler Toffoli scored the series-ending goal less than two minutes into the extra frame, ending Winnipeg’s season.
Here are three takeaways from the Jets’ 3-2 overtime defeat against the Canadiens:

Failing to improve off their struggles from Game Three, the Jets were once again plagued by their inability to play cleanly with the puck in the defensive zone, which was an aspect that largely hindered them throughout the regular season as well. With this team unable to effectively clear the puck out of its own zone, the Canadiens took advantage of those woes and capitalized on them by scoring a pair of goals in the first period.
Following a high-sticking penalty on forward @Andrew Copp, Winnipeg’s penalty killers found themselves pinned in the defensive zone and when veteran @Nate Thompson attempted to carry the puck into the neutral zone, he turned it over and ultimately allowed defenseman @Erik Gustafsson to score on the power play. Later in the opening frame, both @Derek Forbort and @Nikolaj Ehlers failed to advance the puck out of the defensive zone, leading to a turnover and a goal for forward @Artturi Lehkonen.

2. Logan Stanley’s Blasts From The Point

Coming off a productive performance during the regular season, Stanley endured an up-and-down showing throughout this season’s playoffs, where his defensive flaws became exposed at times in the series against the Canadiens. Having said that, the rookie blueliner certainly made up for those struggles Monday night as he served as the Jets’ top offensive contributor.
Scoring his first of two goals just over a minute and a half into the second period, Winnipeg’s skaters won a puck battle in the offensive zone and cycled it around to Stanley, who shockingly blasted his shot over goaltender @Carey Price’s shoulder for the score. Then less than four minutes later, the 6′ 7″ defenseman joined the rush off the bench and was set up perfectly by teammate @Kyle Connor, allowing the 23-year-old to fire home his second goal of the game.

Here we are again… discussing another quiet performance from forward @Pierre-Luc Dubois, who registered just one primary assist during these four games against Montreal. With the series on the line in Game Four, the 22-year-old was nowhere to be found once again and bounced around from the second, third and fourth lines, failing to make an impact over his 15:12 minutes of ice time.
Putting Dubois’ postseason woes into perspective, he generated four goals, 10 points, 27 shots on net, 34 scoring chances and a 3.46 xG rate through 10 playoff games last season. As for this season’s postseason run, the former first-round selection produced just three assists, 15 shots on goal, 18 scoring chances and a 1.49 xG rate through seven contests.
Whether the young forward was battling through an injury or was still adjusting to Winnipeg’s system, there’s no question he’ll need to step up and overcome this disappointing performance next season.

Since the Jets have been eliminated from the playoffs, they’ll now be forced to look ahead to the off-season, which should feature plenty of interesting storylines – including the Seattle Kraken Expansion Draft, the 2021 NHL Entry Draft and free agency.
Uncategorized
Recent articles from Thomas Hall