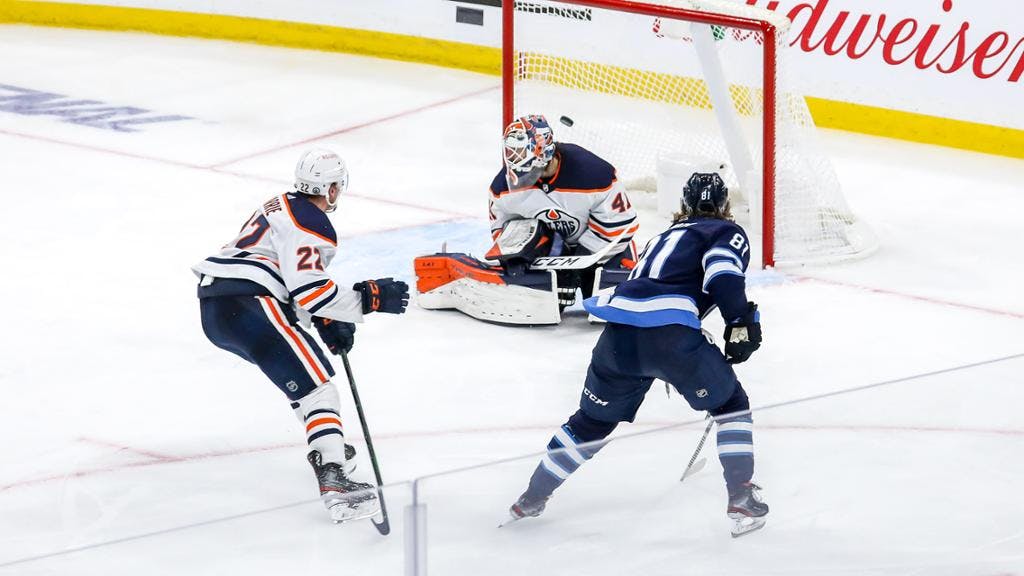 By Thomas Hall
1 year ago
Following a 5-4 overtime victory in Game Three on Sunday night, the Winnipeg Jets were back in action against the Edmonton Oilers just over 24 hours later and were looking to capture one more victory in order to advance to the second round of the Stanley Cup Playoffs.
Striking first in the opening 20 minutes, Winnipeg opened the scoring and also added another goal late in the period, handing them a 2-1 lead heading into the second period. While Edmonton took over the second period, scoring a pair of goals, forward @Mark Scheifele potted his second goal of the game in the third period, tying this contest at three goals apiece and ultimately forcing it beyond regulation.
With zero goals scored during the first two overtime periods, this game entered the sixth frame and featured another historic moment that no one will soon forget, as forward @Kyle Connor fired the series-clinching goal past goaltender @Mike Smith.
Here are three takeaways from the Jets’ 4-3 triple-overtime victory against the Oilers:

Despite being held goalless through the first three games of this series, Scheifele picked the perfect time to break through his scoring drought, as he made a strong impact in Game Four during both five-on-five situations and on the power play as well. Earning 40:13 minutes of ice time, which was the most among all Winnipeg’s forwards, the 28-year-old produced one even-strength goal, one power-play goal, seven shots on net, one high-danger scoring chance, one block and a team-high 0.59 xG rate.
Capturing the game’s opening goal, teammates @Blake Wheeler and @Josh Morrissey cycled the puck in the offensive zone, ultimately sending a pass over to Scheifele, who wired it home for the score on the power play. Then with his team trailing 3-2 in the third period, the former first-round pick received a beautiful between the legs pass from Connor and fired another one-timer into the back of the net, tying the game at three goals apiece.

After Edmonton’s dynamic duo of @Connor McDavid and @Leon Draisaitl scored two goals and six points in Game Three, Winnipeg knew it needed to change things up during the following game and they did exactly that as the club’s third line was primarily matched up against those two elite forwards. While the trio of @Adam Lowry, @Andrew Copp and @Mason Appleton did allow three high-danger scoring chances, none of them came from McDavid as this group did an excellent job of forcing the puck off his stick and keeping him to the perimeter.
As for Draisaitl, the 2019-20 Art Ross Trophy winner broke free a couple of times against the Jets’ third line but was held scoreless during those same matchups. Adding to this group’s remarkable performance, they won a puck battle in the offensive zone near the end of the first period, which ultimately allowed Appleton to tip Morrissey’s shot from the point into the back of the net for the score.

Thanks to Scheifele’s game-tying marker in the third period, Game Four of this series was extended beyond regulation and required an extra 20 minutes of play, however, neither team broke through during the first two overtime periods. As a result, this contest entered the sixth period shortly after 1 am CT, and for Jets supporters, waiting for the game-winning goal was certainly worth the wait.
With McDavid entering the offensive zone, defenseman @Dylan DeMelo kept the Oilers’ captain to the outside and was able to knock the puck off his stick, allowing the 6′ 1″ blueliner to send a pass up the boards to Connor. Since Edmonton was caught in a line change at the time, the 24-year-old found himself all alone at the blue line in the offensive zone and was provided a clear lane to the net, which he capitalized on by scoring the series-ending goal.

With this series wrapped up, Winnipeg’s skaters will receive a much-needed break as they await the winner of the series between the Toronto Maple Leafs and Montreal Canadiens.
Uncategorized
Recent articles from Thomas Hall