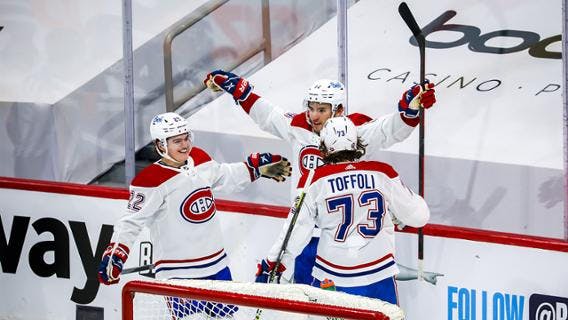 By Thomas Hall
1 year ago
Coming off a nine-day break, the Winnipeg Jets were extremely excited to finally take on their next opponent, although things went off the rails pretty quickly during Game One against the Montreal Canadiens.
After starting this contest without forward @Paul Stastny, Winnipeg lost another key player early on as defenseman @Dylan DeMelo was ruled out after just one shift in the first period. Making matters worse, this team found themselves trailing 3-1 after the opening 20 minutes and failed to cut into that deficit in the middle frame, allowing Montreal to carry a two-goal lead into the third period.
Despite receiving a pair of goals from @Kyle Connor and @Derek Forbort, the Jets allowed a costly power-play goal from forward @Brendan Gallagher midway through the final frame, which ultimately proved to be the game-winner.
Here are three takeaways from the Jets’ 5-3 defeat against the Canadiens:

Considering the Jets received over a week of rest following their series sweep of the Edmonton Oilers, some rust was to be expected out of the gate, however, this team couldn’t find its footing through the opening 20 minutes and those struggles proved to be very costly down the stretch. Failing to match the Canadiens’ intensity, forwards @Jesperi Kotkaniemi and @Eric Staal scored the game’s first two goals just over five minutes into the first period, handing their team an early 2-0 advantage.
While forward @Adam Lowry’s impressive work ethic on the penalty kill allowed him to score a goal of his own, Montreal answered right back before the first intermission as forward @Nick Suzuki’s third goal of the playoffs helped them regain their two-goal lead. In particular, Winnipeg struggled mightily during five-on-five play in the opening frame, as they allowed 11 shots on goal, five scoring chances and four high-danger chances, which is an area where they must improve next time out.

Heading into this second-round matchup against Montreal, Winnipeg had been performing extremely well with the puck and weren’t turning it over nearly as much as they did during the regular season. Unfortunately, this club couldn’t replicate that success in the series opener and committed 14 giveaways through all three periods, which led to additional time in the defensive zone and numerous scoring chances for the Canadiens.
Along with poor puck possession, the Jets’ defenders also found themselves out of position far too often and were seen pinching in the offensive zone at inopportune times, providing the Canadiens several odd-man rushes the other way. Showcasing these woes in the third period, defensemen @Logan Stanley and @Neal Pionk somehow allowed captain @Shea Weber to position himself behind them, allowing the veteran blueliner to skate in on a breakaway that led to Gallagher’s game-winner.

Adding to the fanbase’s level of frustration, they were forced to watch the Jets struggle to generate sustained pressure in the offensive zone throughout this losing effort against the Canadiens, particularly during five-on-five play. Despite creating 21 shots on goal during those situations, the majority of those chances came from the perimeter as this team couldn’t muster up more than two high-danger scoring chances.

Source: NaturalStatTrick.com
While Forbort’s first goal of the playoffs came on one of those high-danger chances, it was Winnipeg’s first shot on net from inside the slot since the first period, which is obviously concerning. Since this club also turned over the puck multiple times at the blue line in the offensive zone, cycling the puck around only became a viable option with the man advantage and is another area where they’ll need to improve moving forward.

After receiving a day-off on Thursday, the Jets and Canadiens will be back in action for Game Two on Friday at 6:30 pm CT.
Uncategorized
Recent articles from Thomas Hall