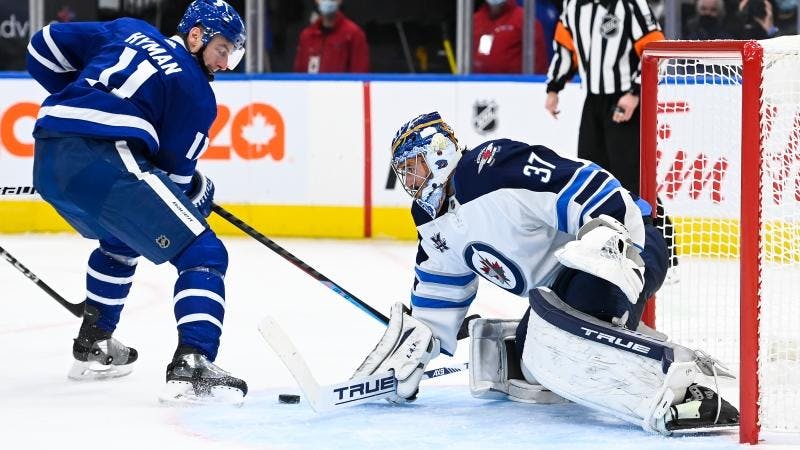 By Thomas Hall
1 year ago
Without question, Saturday’s 7-1 beat down at the hands of the Montreal Canadiens was one of the worst showings of the season for the Winnipeg Jets, although they have a chance to bounce back strong against the Toronto Maple Leafs on Tuesday.
Despite losing the first meeting of the 2020-21 campaign against Toronto, Winnipeg is now a completely different team than they were back in January, especially since forward @Pierre-Luc Dubois wasn’t on the roster back then. Since this will be the first of three straight games between these two clubs, it’ll certainly be extremely interesting to watch how each of them adjusts on the fly during this highly-anticipated showdown.
Here are three storylines that could impact the Jets’ second game of the season against the Maple Leafs:

Thanks to their high-powered offense, the Maple Leafs have dominated in the opening period so far this season, as they’re tied for the most wins when scoring first (13) and are tied for the second-most goals (28) scored in the first period among all 31 teams in the league, according to NHL.com. With this in mind, it’d be extremely beneficial for the Jets to score first on Tuesday night, especially since they’ve only produced five goals in the opening period over the last eight games.
Taking this a step further, Winnipeg will definitely be able to slow down Toronto’s offense if they’re forced to defend in the defensive zone throughout the majority of the first 20 minutes. But considering this club has shown they’re comfortable when playing from behind, which has them tied for the third-most wins (six) when trailing first, they still might scratch out a victory even if they fall behind early.

While the Jets have been one of the more disciplined teams in the league this season, as they’re tied for the fifth-fewest number of penalties taken (76), they’ll need to make it a priority to stay out of trouble during this contest or they might struggle to keep pucks out of their own net. Taking into account that the Maple Leafs scored easily on their first and only power-play opportunity back on Jan. 18, limiting their chances with the man advantage could go a long way in determining the outcome of this showdown.
Considering Toronto has produced the highest conversion rate (31.3%) on the power play in 2021, Winnipeg certainly can’t afford to take any unnecessary penalties or any infractions for that matter. If they can accomplish this feat, then perhaps they won’t be forced to come from behind late in the game, which would definitely be a welcomed occurrence.

Following a forgettable performance on Saturday, which saw the Jets leaving goaltender @Connor Hellebuyck out to dry on multiple occasions, this matchup against the Maple Leafs would be the perfect time for the 2019-20 Vezina Trophy winner to bounce back and enjoy one of his best starts of the season. After stopping five of the six high-danger shots against him during five-on-five situations last time out against this opponent, the 27-year-old will be aiming to replicate that same success this time around.
Since Toronto has only scored a combined three goals over the last two games, their roster will undoubtedly be looking to breakthrough this recent drought on Tuesday, although keeping their forwards frustrated could significantly improve Winnipeg’s chances of avoiding a three-game sweep.