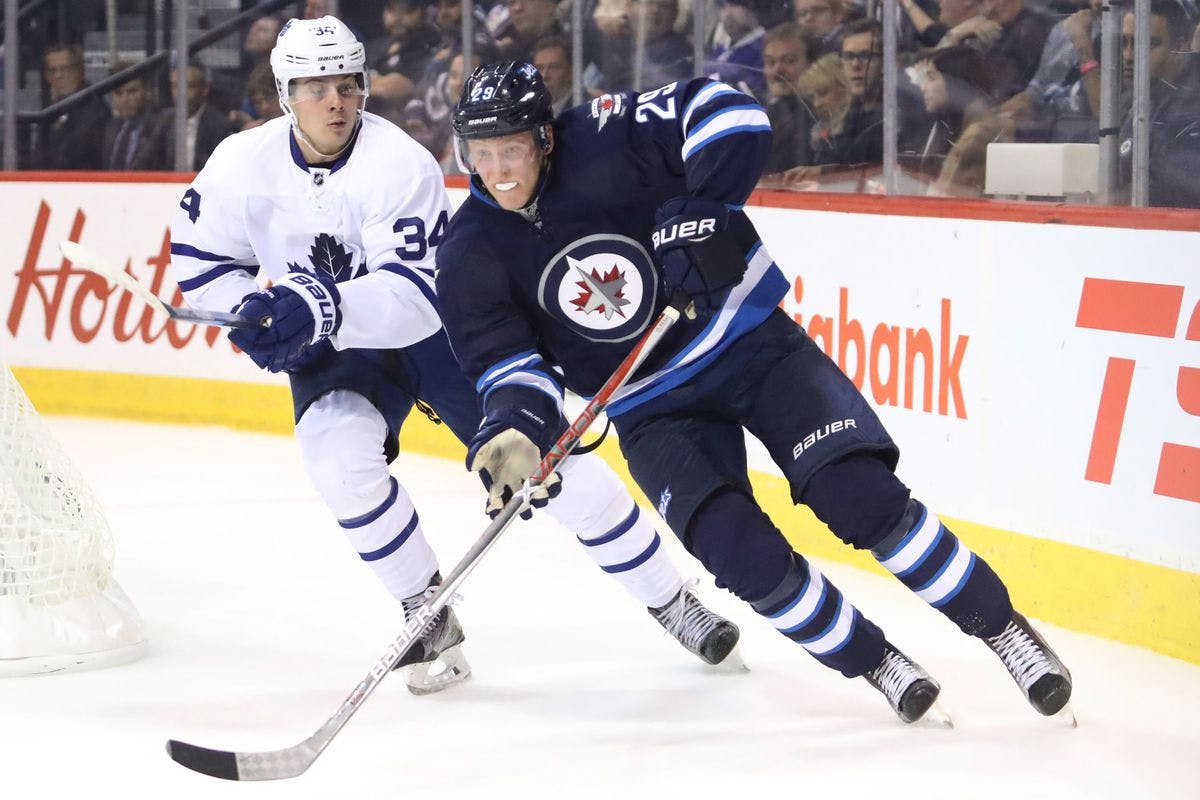 By Thomas Hall
1 year ago
Following an overtime victory against the Calgary Flames on opening night, the Winnipeg Jets will now leave town for the next three games, which will include back-to-back games starting on Monday night.
While the Jets were given the weekend off, their schedule is about to become extremely hectic, as they’ll face off against the Toronto Maple Leafs on Monday night and will then travel to Ottawa to take on the Senators just one day later. So everyone better be fully rested and prepared for a ton of playing time over these next couple of days.
Here are three storylines that could impact the Jets’ back-to-back series against the Maple Leafs and the Senators:

After missing Winnipeg’s season opener due to the birth of his new child, coach Paul Maurice confirmed defenseman @Dylan DeMelo won’t be traveling with the team during their upcoming road trip, meaning he’ll be inactive for the next three games. To make matters worse, Maurice also announced defenseman @Tucker Poolman, who remains on the league’s COVID-19 list, will be left at home as well, leaving two open spots on the club’s blue line.
Without either of these two blueliners in the lineup, there’s no question the coaching staff will be counting on defenseman @Josh Morrissey to make a positive impact every time he leaves the bench, but they’ll also need someone like @Sami Niku, who drew into the lineup on Thursday, to step up in a massive way. As who else may fill in as a replacement, defenseman @Logan Stanley will make his NHL debut, which will be a special moment for him since he grew up just over an hour outside of Toronto.

2. All Eyes on Connor Hellebuyck

Considering the Jets will be without two of their regulars on the back end, they’ll need goaltender @Connor Hellebuyck, who allowed three goals on 26 shots on Thursday, to play lights out over this next stretch of games or this might not be a successful road trip. But considering the Maple Leafs (averaging 3.67 goals per game) and the Senators (averaging 3.50 goals per game) haven’t struggled to find the back of the net this season, holding their offenses in check could prove to be extremely difficult.
Since it’s just a few games into the campaign, it’d probably be wise for the club to give Hellebuyck the night off during the second game of the back-to-back, meaning backup goaltender @Laurent Brossoit could make his season debut on Tuesday. With that in mind, it’ll be crucial for the 27-year old, who posted a 3.28 goals-against average and a .895 save percentage last season, to enjoy an encouraging start to his third campaign in Winnipeg.

Even though forward Patrik Laine left Sunday’s practice early, there was some hope he’d still be able to participate in Monday’s showdown against the Maple Leafs. Unfortunately, the 22-year old still couldn’t get loose during the Jets’ morning skate at Scotiabank Arena, meaning it’s possible he won’t be available for either of the team’s next two games.
If that’s the case, then they’ll need teammate @Kyle Connor to step up and serve as the primary goal scorer on the second line, as there’s a strong chance he’ll receive an increased amount of scoring chances with Laine sidelined. Promoted from the club’s third line, forward @Mathieu Perreault is expected to join @Paul Stastny and Connor on the second line, which will provide him with an opportunity to showcase his skills early in the season.

The puck will drop at 6 pm CT for both games and each of them will be available on TSN 3 along with 680 CJOB.
Uncategorized
Recent articles from Thomas Hall