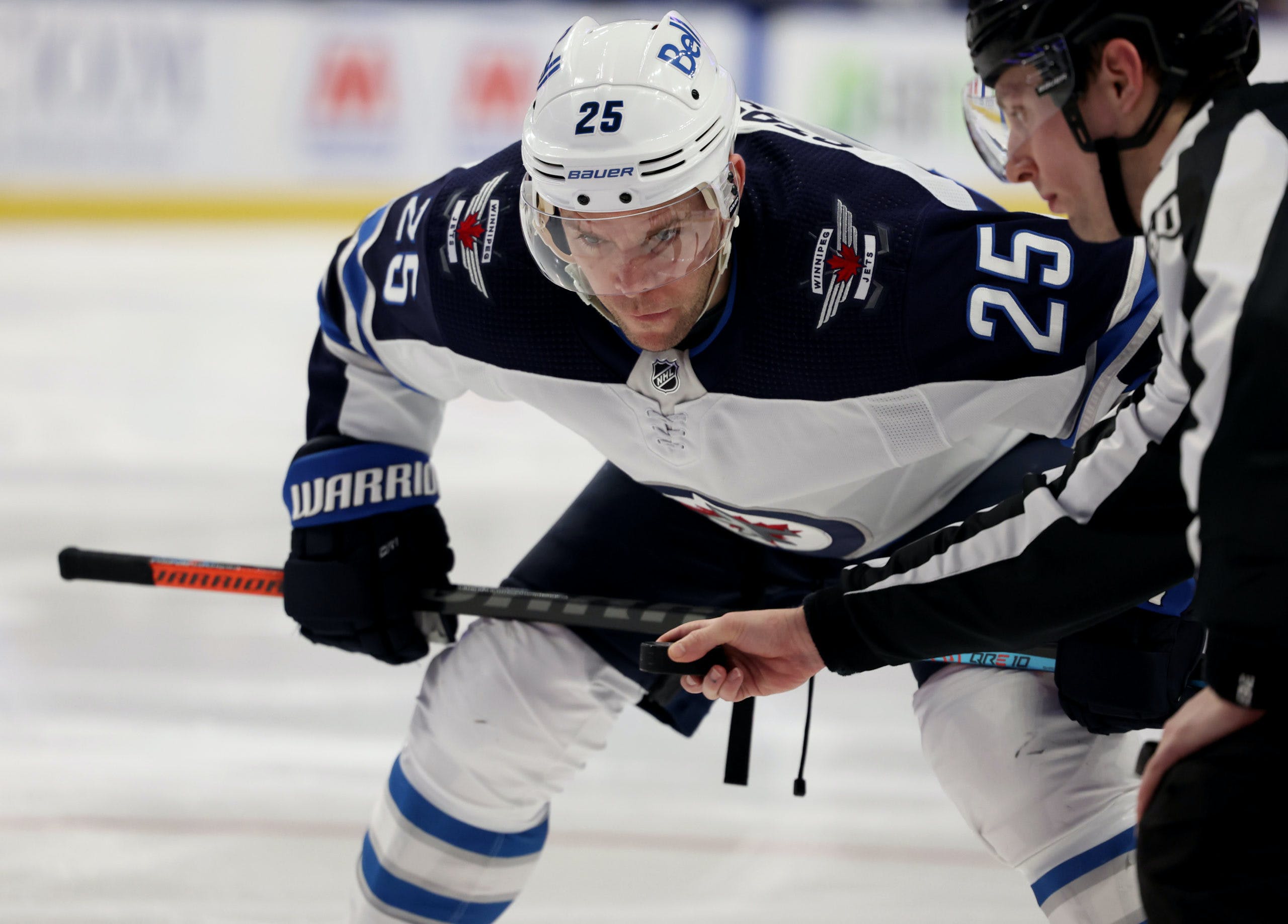 By Thomas Hall
7 months ago
Just one night ago, the Winnipeg Jets narrowly escaped with a 4-3 victory during the first half of their back-to-back series, which came against the Ottawa Senators. On Monday, they’ll be tasked with finishing this slate in Montreal versus the Canadiens.
When these two franchises met at Canada Life Centre last month, there wasn’t any shortage of scoring for either club as 12 total goals were scored once the final horn sounded. For Winnipeg, its skaters registered eight of those 12 markers, with two of them coming from forward @Mark Scheifele.
Unfortunately, after colliding with Senators forward @Parker Kelly, Scheifele sustained a shoulder injury that’s still being evaluated and will keep him out of action Monday.
Still without captain @Blake Wheeler as well, losing Scheifele leaves another massive hole within the Jets’ line-up. In turn, they’ll need other skaters to step up and help fill these voids, especially with the busy schedule that lies ahead.
With that in mind, let’s explore three skaters worth keeping an eye on during this contest between Winnipeg and Montreal.

Last Game: One goal, two points, three shots on goal, 19:45 minutes
In light of Scheifele’s recent injury, veteran @Paul Stastny figures to become an even larger aspect of the Jets’ top-six forward group as he slides over to centre to fill in as an injury replacement.
For most of this season, Stastny has taken numerous face-offs while being paired next to Scheifele, which has seen him register a career-best 58.5 per cent clip. So he shouldn’t experience many differences in that department.
Aside from face-offs, however, the 36-year-old has spent the majority of his time on the wing in 2021-22. While he possesses a long history at centre, at this stage of his career, it’ll be interesting to observe how he responds to moving back to his natural position.
But given how productive Stastny has been, chances are he’ll handle his extra responsibilities extremely well moving forward. Hopefully, that’ll help him extend his current two-game point streak, possibly resulting in his 20th goal of the season – something he hasn’t accomplished since 2013-14.

Last Game (Mar. 31): 31 saves, 37 shots against, .838 save percentage
Nearly two weeks have passed since backup @Eric Comrie’s last start, which saw him allow six goals against the Toronto Maple Leafs. Though Monday’s starter still hasn’t been confirmed, the 26-year-old is expected to play during the second half of this back-to-back series.
Heading into this season, there was plenty of uncertainty surrounding Winnipeg’s goaltending situation, obviously, aside from starter @Connor Hellebuyck. And yet, with only three weeks remaining, Comrie has easily exceeded everyone’s expectations.
In 13 games (12 starts), the Edmonton, Alberta, native has recorded career-bests in goals-against average (2.68), save percentage (.912) and wins (eight). Not to mention, he’s also posted an impressive .929 save percentage at even-strength.
With only one other back-to-back left, Comrie might not receive many additional starts following this week and could potentially be limited to reserve duties across the final two weeks. Sadly, that’s the downside to playing behind Hellebuyck.

Last Game: Two shots on goal, one hit, 12:52 minutes
Since being recalled from the American Hockey League, defenceman @Dylan Samberg has served as a breath of fresh air for a Jets’ blue-line that’s largely struggled this season.
Across just two games, Samberg has added some much-needed skill, grit and smoothness to this faltering group. Despite being positioned on the bottom pairing, in just a short time, the 6’3″ blueliner has already improved his linemate, @Brenden Dillon.
Last time out, this newly-formed duo performed to team-highs regarding Expected Goals For Percentage (75.2 per cent), Corsi For Percentage (65.0 per cent) and Fenwick For Percentage (63.2 per cent) at 5-on-5, according to MoneyPuck.com.
For now, Samberg is currently acting as @Logan Stanley’s injury replacement, however, his immediate success suggests he should probably receive an extended opportunity at this level through the rest of the way.