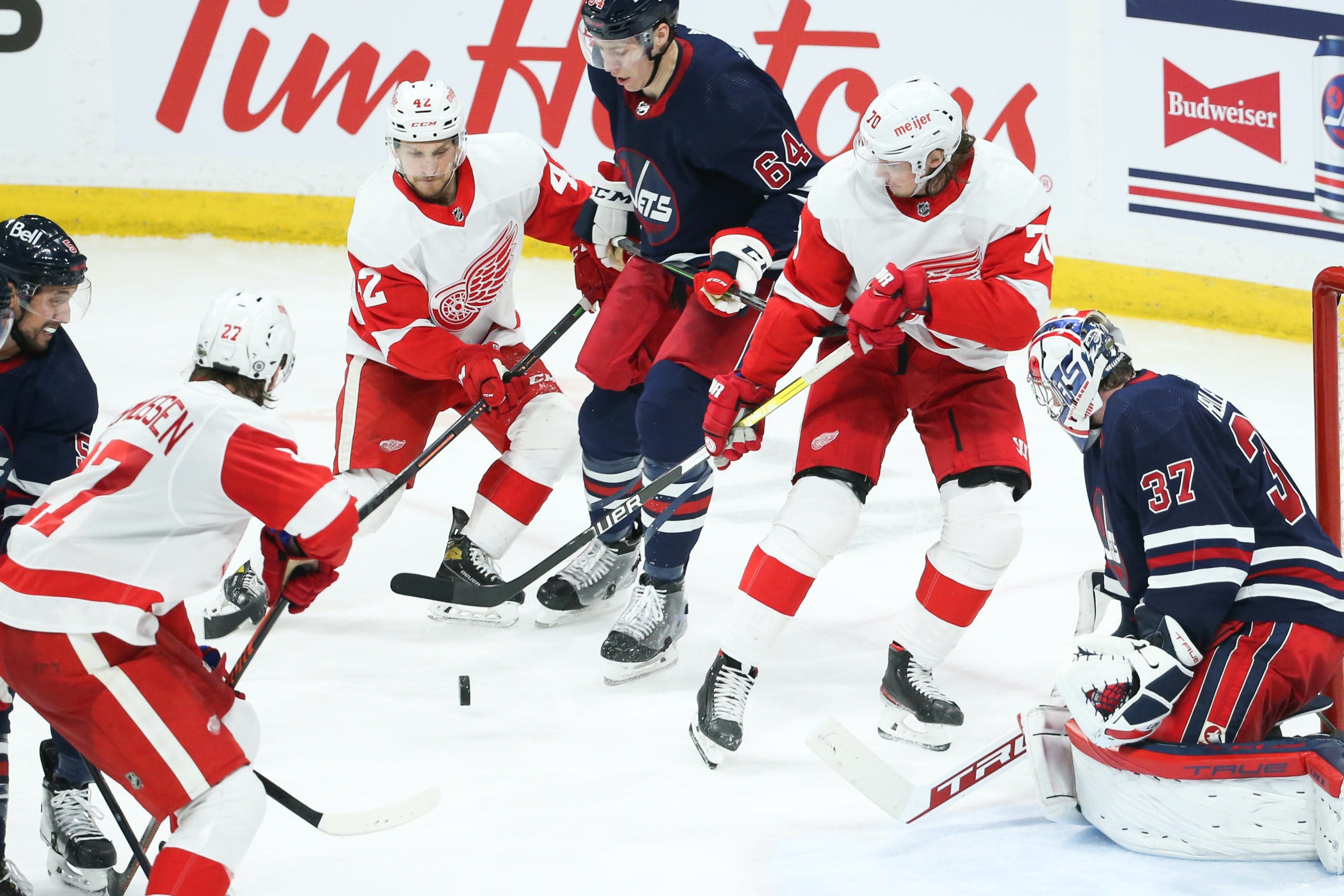 Another day, another tough loss for the Winnipeg Jets.

In a game they desperately needed to win, the club fell short and couldn’t surge past the Detroit Red Wings, who were on the second night of a back-to-back. After grinding out a hard-fought victory against the Boston Bruins the night before, they came into Canada Life Centre on Wednesday and did the exact same thing.

Despite a quality first-period performance, the Jets failed to solve goaltender @Thomas Greiss – who enjoyed one of his best showings of the season – keeping them scoreless through the opening 20 minutes. For the Red Wings, however, a costly turnover from defenceman @Josh Morrissey ultimately helped veteran @Sam Gagner register his first of two goals on the night.

Cracking the scoreboard in the second period, forward @Mark Scheifele positioned himself perfectly to redirect a blast from teammate @Nate Schmidt, tying this contest at one goal apiece. Sadly, that was the only time they’d light the lamp.

Everything came crashing down for Winnipeg over the final 20 minutes of play. With their skaters unable to break through offensively, that provided an opening for Detroit to take control, which is precisely what transpired following @Michael Rasmussen’s go-ahead goal.

It's Michael Rasmussen picking up the loose garbage in front of the net for his 4th tally in the last five games! #LGRW pic.twitter.com/u1VMpXYGUl

All in all, once Gagner potted his second marker of the game into an empty net, everyone inside the building knew that making a playoff surge had just become virtually impossible. What was once hanging by a thread heading into Wednesday’s matchup, has now been snapped.

For a look back, if you’re brave enough, let’s revisit three takeaways from this most recent defeat.

Another Forgettable Performance From the Stanley-Dillon Pairing

The Jets have been plagued by poor line-up construction for most of this season and on Wednesday, this glaring issue proved costly once again.

With Schmidt returning from COVID-19, interim Dave Lowry and his staff were forced to juggle their defensive pairings as all seven blueliners are now healthy. Making an unpopular decision, at least, amongst the fan base, the coaching staff decide to sit youngster @Ville Heinola, pairing @Brenden Dillon and @Logan Stanley on that bottom pairing.

There’s no question this duo features plenty of size, although that’s probably the only upside they provide. Sure, this pairing can occasionally block shots and register hits, but from an overall perspective, they’ve been far below average in terms of effectiveness.

During this most recent example, this combination of Stanley and Dillon endured the worst performance out of all three of Winnipeg’s defensive pairings. In total, they earned a miserable 28.5 per cent Expected Goals For Percentage, a 35.7 per cent Fenwick For Percentage and a 31.6 per cent Corsi For Percentage at 5-on-5, according to MoneyPuck.com.

Most notably, Detroit scored its only 5-on-5 goal while this pairing was on the ice, which occurred midway through the third period. Shortly after Stanley lost a puck battle behind Winnipeg’s net, Rasmussen received a pass in front and whacked away at his rebound until it crossed the red line – with both Stanley and Dillon watching helplessly.

As most fans predicted prior to puck drop, keeping Stanley and Dillon together wasn’t a wise decision, though making mental mistakes has been at the forefront for this franchise in 2021-22.

Entering Wednesday’s contest, Winnipeg’s skaters already had their backs up against the wall and to make matters worse, they encountered an immovable force in Greiss one night ago.

Out of the gate, this team came ready to play and generated 10 high-danger chances during all situations through the opening 20 minutes, resulting in a 2.04 expected goals for rate. And yet, the 36-year-old netminder stopped all 13 shots against in the first period.

In the end, Greiss made 32 saves on 33 shots against, 13 of which were of the high danger variety. As a result, he finished with 3.24 goals saved above expected, easily making him Detroit’s top performer.

Between his five stops against both @Pierre-Luc Dubois and @Paul Stastny, who each record five shots on goal, Greiss frustrated his opponent all game long en route to his ninth victory of the season.

The 2021-22 campaign hasn’t been kind to him, courtesy of his 3.63 goals-against average and .890 save percentage, but the veteran goaltender certainly stole the show at Canada Life Centre.

For most of this season, Dubois has been a primary source of Winnipeg’s offensive production, both at even-strength and on the power play. While he didn’t struggle to create opportunities against Detroit, pucks just didn’t bounce in his favour this time around.

Among all Jets skaters, the 23-year-old ended the night with the highest individual expected goals rate (1.18) and was also tied for the most high-danger chances (four), as well. Unfortunately, all five of his shots on goal were stopped by Greiss, which extended his scoring drought to three games.

If not for an offside call determined by replay review, Dubois would’ve played a part in creating captain @Blake Wheeler’s 13th goal of the season. Even though he wouldn’t have earned an assist on the play, the power forward generated an easy offensive-zone entry and started the cycle that ultimately concluded with Wheeler’s redirection.

But alas, it was all for naught.

As someone who’s still sitting on 99 career NHL goals, hopefully Dubois doesn’t have to wait much longer before hitting that historic milestone. Perhaps it’ll finally happen Friday when the Colorado Avalanche arrive.