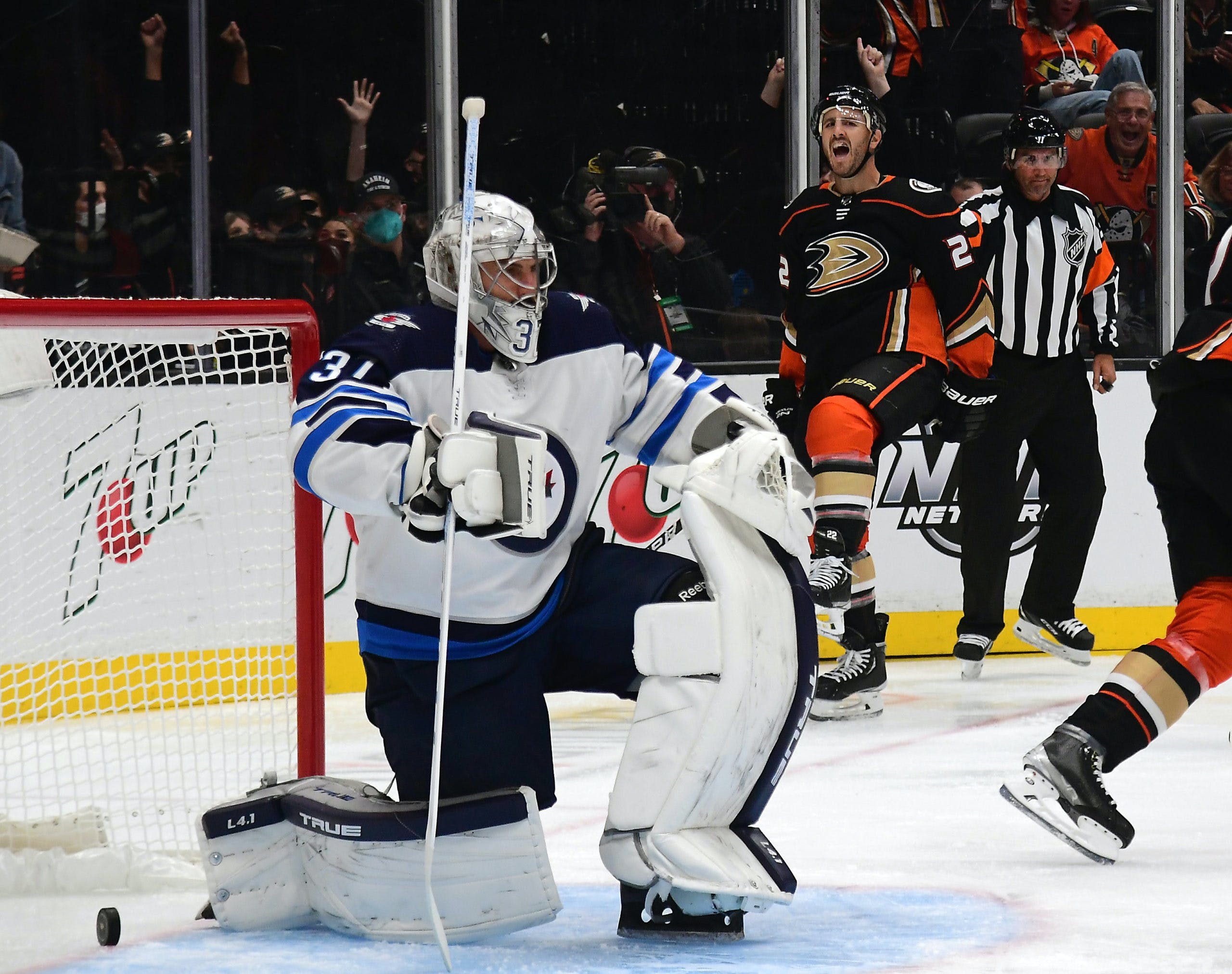 By Thomas Hall
1 year ago
The regular season is officially underway, but for the Winnipeg Jets, who opened the 2021-22 campaign on the road against the Anaheim Ducks, things definitely didn’t go according to plan on opening night.
Despite coming out strong in the opening frame, outshooting their opponent 15-6 through the first 20 minutes, the Jets didn’t have anything to show for it as they were held off the scoreboard during that span. Making matters worse, they allowed a pair of goals from @Kevin Shattenkirk and @Mason McTavish – racking up his first career NHL marker – allowing the Ducks to control a 2-0 lead heading into the second period.
Then in the middle frame, Winnipeg cut its deficit in half as forward @Kyle Connor blasted home a one-timer for his first goal on the young season. But just as it seemed like this club was regaining some of the momentum it had lost, they surrendered consecutive power-play goals and ultimately fell 4-1 once the final horn sounded.
Without question, the Jets won’t be pleased with the outcome of this opening night contest, however, there were a few encouraging aspects from this disappointing defeat.
For what stood out, both positively and negatively, here are three takeaways from Game 1 of 82:

With forward @Mark Scheifele serving the final game of his suspension from last season, coach Paul Maurice and the rest of his staff decide to provide rookie @Cole Perfetti with an opportunity to make his NHL debut, and though it was just one contest, he didn’t disappoint.
Granted, Perfetti only received 9:39 minutes of ice time, fifth-fewest on the team, although he made the most of all 14 of his shifts as he seemingly created a positive impact every time he stepped on the ice. Just glancing at the score sheet, most people would likely think it was a fairly quiet night for the youngster, but in actuality, it was far from that.
Along with posting one high-danger scoring chance and one rebound created, according to NatualStatTrick.com, the 19-year-old carried and advanced the puck very well, which resulted in multiple clean defensive zone exits. Additionally, the left-hander also displayed his stellar hockey senses once again as his positioning set him up to succeed on numerous occasions.
Most notably, the 5’10” forward nearly earned a chance to register his first career NHL goal, as he was positioned directly in front of a wide-open net, unfortunately, @Jansen Harkins’ cross-ice pass just couldn’t reach him before it was intercepted.
Since Scheifele is expected to return to the lineup next game, which is scheduled for Saturday against the San Jose Sharks, it’s unclear if Perfetti will remain up with the Jets for much longer. But whatever comes next, there’s no denying he’s capable of performing at the highest level of competition – so let’s see what happens.

If a team with as much talent as the Jets currently possess received five power-play opportunities in a single game, one would expect them to convert on at least one of those chances, right? Well, that didn’t prove to be the case Wednesday night.
On the same day Winnipeg opened the regular season, they were gifted five separate opportunities with the man advantage and failed to capitalize on every single one, which was obviously less than ideal. But wait, there’s more. Of the 12 shots on goal that were generated during these chances, only three of them came from high-danger areas – yes, that’s it.

Source: NaturalStatTrick.com
As seen in the chart above, while the Jets’ special teams units may have shared the puck effectively, the majority of their scoring opportunities came from outside the slot. Instead of driving hard to the net or creating plenty of traffic in front, their skaters settled for low-percentage shots from the perimeter.
With Ducks goaltender @John Gibson deciding to steal the show, which saw him stop 33 of the 34 shots he faced during this contest, not even a few electric scoring chances from @Nikolaj Ehlers were enough to help spark his club’s offence.
Looking ahead to future matchups, if Winnipeg’s forwards can make it a point of emphasis to drive to the net while also positioning multiple bodies in the slot, odds are they’ll enjoy much more success in the offensive zone moving forward.

Must Defend Down Low More Effectively

This might seem like a simple concept, at least, on the surface, but providing net-front support for goaltender @Connor Hellebuyck proved to be one of Winnipeg’s biggest struggles on opening night in Anaheim.
Due to this ineffective game plan from this team’s defenders, the Ducks forwards were successful in obstructing Hellebuyck’s vision several different times, allowing them to score a pair of goals via deflections, along with one that saw McTavish screening in front and another one due to a massive scramble that led to the rookie’s first NHL score.
Though improving upon these woes will require buy-in from everyone on the roster, considering the defensive pairings of @Neal Pionk – @Brenden Dillon and @Logan Stanley – @Dylan DeMelo were each on the ice for two goals against, it’ll be vital for both of these duos to communicate more effectively in the defensive zone in an effort to help clear the front of the net.
If they’re successful in accomplishing this feat, in turn, the Jets could be poised for a much more favourable outcome when hit the ice for their second game of the season this weekend against the Sharks.