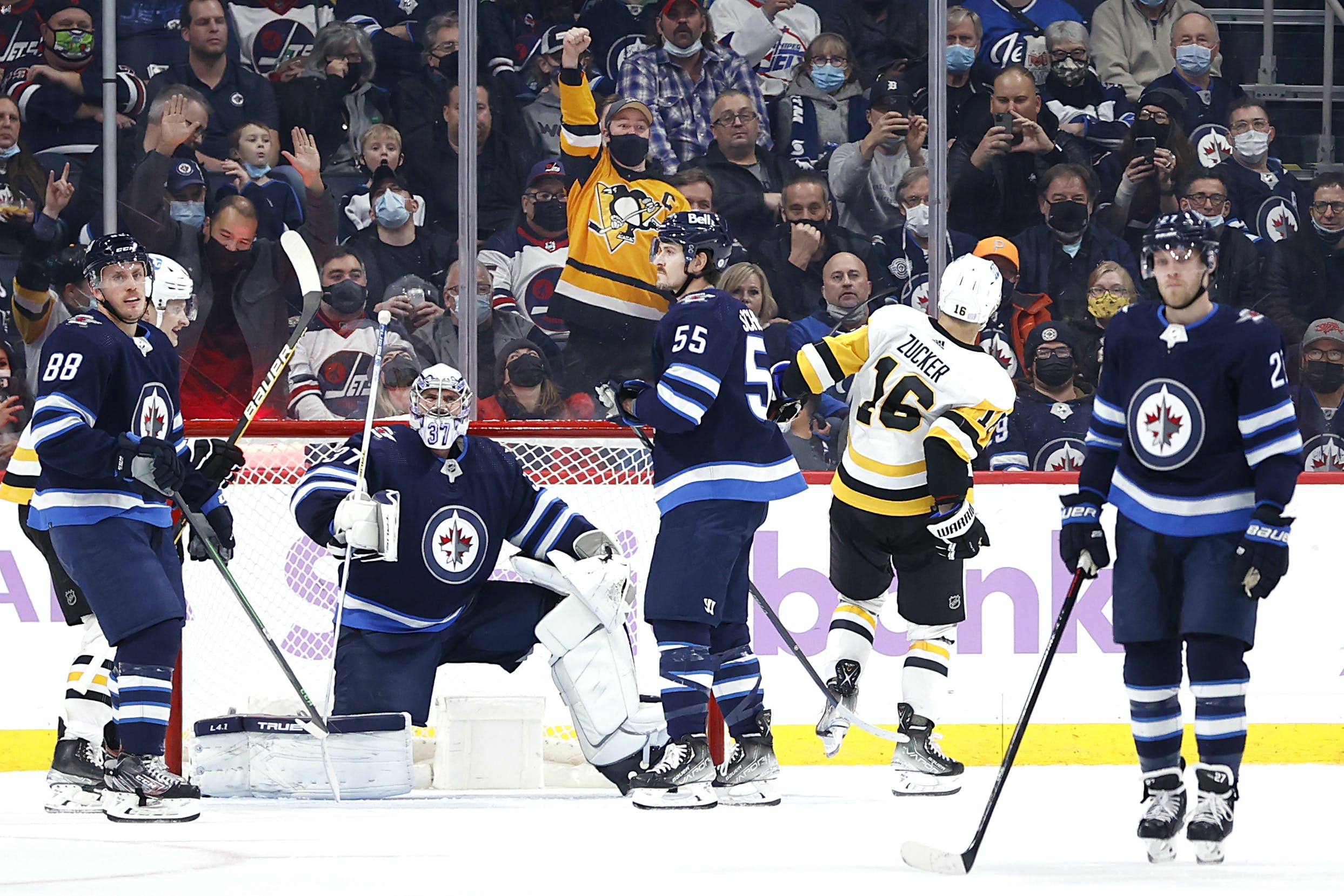 By Thomas Hall
1 year ago
After receiving a well-deserved weekend break, the Winnipeg Jets returned home for a brief visit as they took on the Pittsburgh Penguins for the first time in over two years, although it didn’t prove to be a successful pitstop at the Canada Life Centre.
Early on, the Jets came out firing on all cylinders during the opening 20 minutes and controlled the flow of the game throughout that span. As a result, they dominated in almost every aspect of play in the first period, leading the way in shots on goal (11), high-danger scoring chances (four) and expected goals for percentage (69.9%), according to NaturalStatTrick.com.
Despite all of this offensive pressure, particularly at 5-on-5, Winnipeg could only muster up one goal in the first frame, courtesy of forward @Dominic Toninato.
Witnessing a dramatic turnaround through the final 40 minutes, Pittsburgh’s skaters made some much-needed adjustments following the first period and largely neutralized their opponent’s offensive approach the rest of the way. Thanks to three unanswered goals from @Jason Zucker – Mr. Handlebar mustache man – @Danton Heinen and @Jake Guentzel, they ultimately came away with a 3-1 victory.
For a recap of this disappointing contest, here are three takeaways from the first of two meetings this season between the Jets and Penguins:

As of late, clearing traffic in front of goaltender @Connor Hellebuyck hasn’t been nearly as much of a glaring issue for the Jets, however, this troubling concern reared its ugly head once Monday night.
Though Hellebuyck didn’t face much pressure in the opening 20 minutes, as the Penguins only created one high-danger chance, all of that changed for the worse over the final two periods of play. In turn, the 28-year-old was far busier over those final 40 minutes, facing 13 total high-danger chances, with 10 of them occurring at 5-on-5.
Leading to Pittsburgh’s first score of the night, with both @Josh Morrissey and @Nate Schmidt attempting to block a wraparound attempt, by doing so, they left the front of the net unattended. Taking advantage of that miscue, @Evan Rodrigues sent a pass over to a wide-open Zucker, who quickly fired the puck top shelf to tie the game at 1-1 in the second period.
Making a similar mistake in the third period, after Hellebuyck couldn’t corral an awkward shot off his shoulder, a juicy rebound was left in the middle of the slot. Since defenceman @Brenden Dillon was mistakenly positioned near the side of the net, he couldn’t pounce on the loose puck quickly enough, allowing Heinen to capitalize for his sixth goal in 2021-22.
Despite receiving inconsistent support from his defenders, Hellebucyk still found a way to keep his team in the game until the final buzzer sounded, stopping 33 of his 35 shots against – including this heroic diving stop while on the penalty kill.

Based on the amount of talent Winnipeg’s roster features upfront, you’d think this group would be considered one of the top power-play units in the league, and while they enjoyed plenty of success in October, those results haven’t translated over to November thus far.
From Oct. 12-31, this team was tied for the eighth-highest percentage (25.0%) with the man advantage, according to NHL.com. But since Nov. 6, they’re near the bottom of the leaderboard in that department, as their measly 5.6 per cent mark is currently tied for second-lowest in the league during this frustrating span.
Showcasing these special teams struggles during their most recent contest against the Penguins, the Jets drew a pair of penalties in this matchup – they probably should’ve earned a few more than that – but couldn’t capitalize on either of them. For the most part, both units failed to effectively set up in the offensive zone, leading to just four total shots on goal along with three shorthanded shots against.
In particular, forward @Pierre-Luc Dubois was the lone skater who stood out with the man advantage, as he was the only player to generate at least one scoring chance and an individual xGF rate of 0.5 or higher. Other than three blasts from the point, courtesy of @Nate Schmidt and @Neal Pionk, Winnipeg’s power play was held at bay all game long.
With this in mind, perhaps it’s time for coach Paul Maurice to shake up the power-play lines, potentially allowing @Kyle Connor and @Nikolaj Ehlers to reunite while operating with the extra skater.

Amid what proved to be a disappointing outcome for Winnipeg, however, not everything was a negative for this franchise Monday night as they received a pretty encouraging performance from Toninato.
Appearing in his 15th game of 2021-22, the 27-year-old only earned 6:43 total minutes of ice-time, including just 4:58 minutes at 5-on-5, but made the most of all 10 of his shifts, especially in the first period. Despite spending minimal time on the ice, the 6’2″ winger served as one of the top offensive contributors, registering two shots on goal, two high-danger chances, a 0.25 individual xGF rate and his second goal of the season.
Making his presence felt early on, the Jets’ fourth line enjoyed plenty of success in the opening frame, as @Riley Nash and Toninato broke out on a 2-on-1 rush and nearly combined to score the game’s first goal. Later in the period, with Nash winning a puck battle in the offensive zone, possession ultimately cycled around to Pionk, who had his shot from the point blocked.
Thankfully, Toninato was able to quickly jump on the loose puck before firing it home to hand his club a 1-0 advantage midway through the first period.
Following this strong showing, the left-hander now owns two goals and three points on the season, despite only averaging 7:52 minutes of ice-time per game.
Uncategorized
Recent articles from Thomas Hall