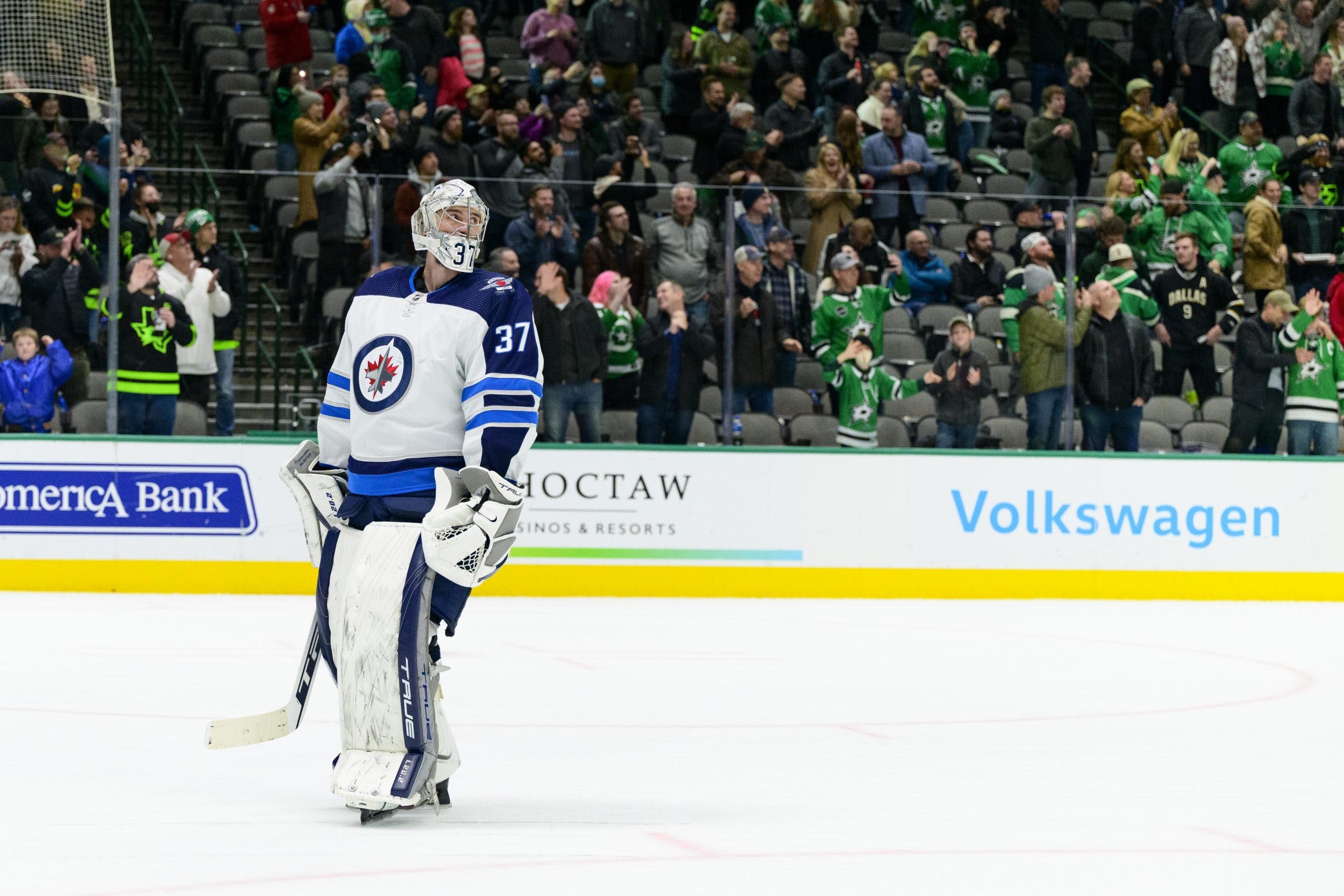 By Thomas Hall
9 months ago
Despite earning a point in their 3-2 overtime defeat to the Dallas Stars on Wednesday, the Winnipeg Jets still find themselves in a very treacherous spot with just 31 games remaining in the regular season.
Winning games is the main focus for this club right now, however, they aren’t doing nearly enough of that.
Coming off a third straight loss, the Jets are currently positioned six points back of the Edmonton Oilers, who control the final wild-card seed in the West. Along with catching Edmonton, they’ll also need to leap over three other franchises (Anaheim Ducks, Vancouver Canucks, Stars) as well.
If that wasn’t difficult enough, Winnipeg is set to visit one of the top teams in the league Friday night, the Colorado Avalanche. With a remarkable 37-10-4 record and 78 points, their organization controls a comfortable 12-point advantage over the St. Louis Blues for top spot in the Central Division.
As everyone likely remembers, the most recent meeting between these two clubs didn’t end well for the ‘True North’ crowd as they were sent home with an embarrassing 7-1 beatdown on Jan. 6. It certainly wasn’t an easy defeat to swallow afterwards, as it shouldn’t have been.
In hopes of avoiding a similar fate, here are three storylines ahead of this rematch between the Jets and Avalanche:

Jets Aiming to Keep Play at Even Strength

Slowing down Colorado’s offence is a challenging task in itself, but providing their skaters with numerous power-play opportunities is a mistake Winnipeg can’t afford to make a second time around.
Last time out against this opponent, the Jets committed six separate penalties, two of which were off-setting minors. In the end, the Avalanche were gifted four chances with the man advantage and capitalized on three of them before the final horn sounded.
Sadly, that hasn’t been the only occurrence of this team acting undisciplined. Proving as such in their latest contest, the Stars received five different power-play opportunities, thankfully, they couldn’t convert with the extra skater.
Granted, the officiating in Wednesday’s game was extremely inconsistent, however, the fact remains this line-up must prioritize staying out of the penalty box throughout this upcoming matchup.
If Winnipeg is to neutralize Colorado’s power play, which features the eighth-highest percentage (23.4) in the league, it’ll be key to limit the number of infractions called against them.

Another Challenging Test for Connor Hellebuyck

Set to make his 44th start of 2021-22, goaltender @Connor Hellebuyck is almost certainly in store for another busy night while facing the Avalanche, one that’ll hopefully play out much smoother than last time.
During last month’s 7-1 defeat, Hellebuyck was forced to endure all seven goals against, which saw him make 35 saves on 42 shots against. Adding to his workload, five of those seven markers were scored from high-danger areas – his second-highest total of the season in that department.
But in his most recent outing, the 28-year-old kept the Jets in the game against the Stars, stopping 36 of his 39 shots against. Digging deeper, the trio of goals allowed were of the high-danger variety as he made nine saves on 12 HD shots against.
Without this solid performance, Winnipeg could’ve easily found itself playing from behind yet again, but thanks to its 6’4″ netminder, that fate was avoided until overtime. Instead of providing him with additional run support, this team largely decided to coast with just a one-goal lead and, as we all know, that plan didn’t prove effective.
Nevertheless, all Hellebuyck can do is focus on his job Friday night, which is to frustrate Colorado’s skaters, seems easy enough, right?

Who knows what sparked captain @Blake Wheeler’s second-half turnaround, although if the Jets are to be successful against the Avalanche on Friday, they’ll need his offensive production to continue.
Since the unofficial second half commenced, Wheeler has looked identical to his vintage self, posting four goals and 14 points over the last nine games. More recently, the 35-year-old showcased his impressive instincts by following a rush into the offensive zone, driving to the slot and perfectly positioning himself for his sixth goal of the season.
It’s plays like this that should make Jets fans very encouraged about Wheeler’s ability to sustain his current offensive stretch. Sure, the 35-year-old no longer possesses much quickness, but as long as his legs keep moving, his production shouldn’t take any concerning hits the rest of the way.
With 19 goals and 51 points across 36 career games against Colorado, No. 26 will be striving hard to extend those totals during this Friday night bout at Ball Arena.
More from Jets Nation:
Uncategorized
Recent articles from Thomas Hall