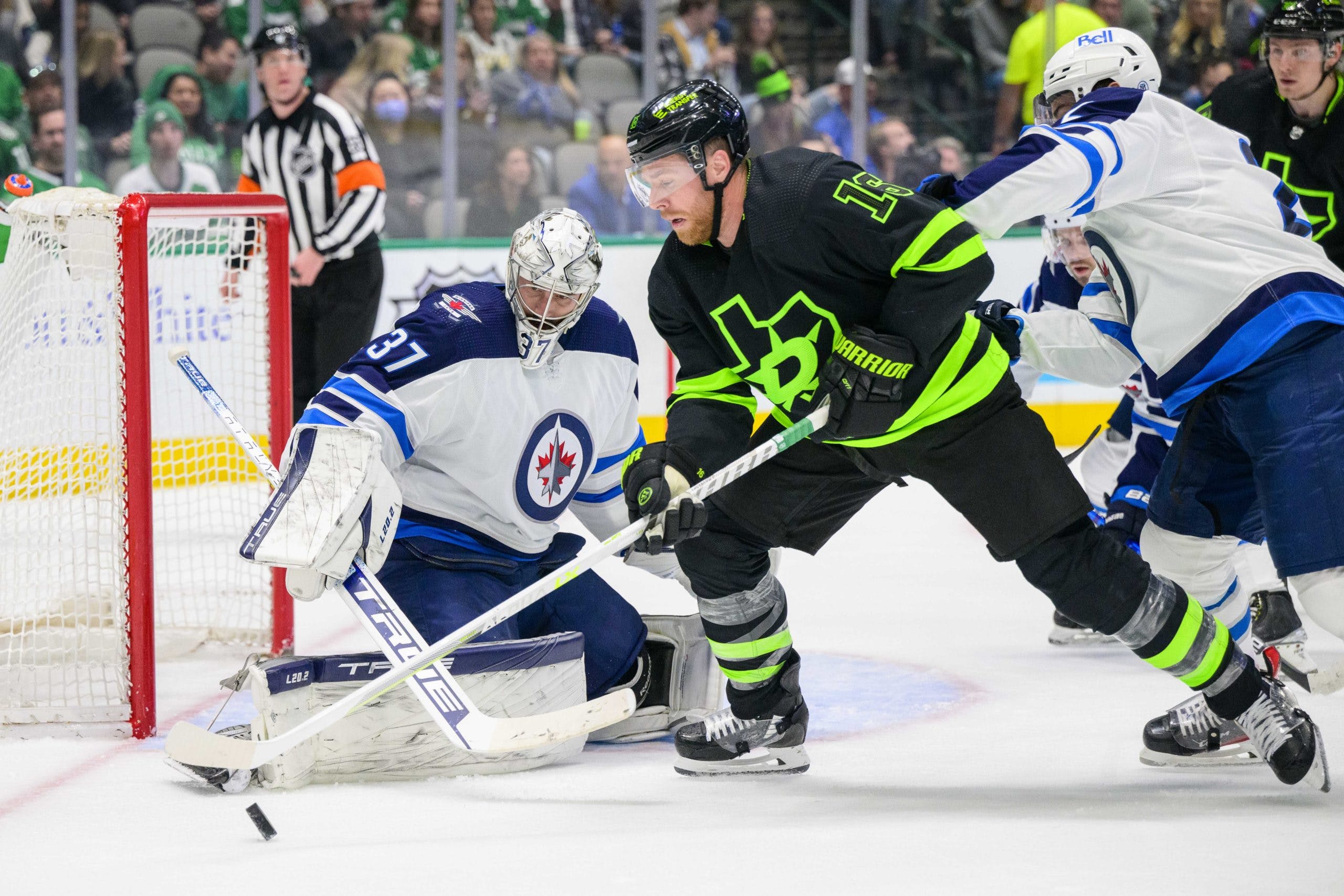 By Thomas Hall
9 months ago
Two days ago, the Winnipeg Jets were less than a minute away from earning at least one point, and possibly more, against the Calgary Flames. Unfortunately, a late goal from forward @Elias Lindholm changed everything as he helped lead his team to a 3-1 victory.
Now, the Jets must find a way to rebound off this crushing defeat in order to avoid a three-game losing skid.
Adding to the importance of this upcoming contest, this club is scheduled to take on one of the four teams they’re currently trailing in the wild-card race, the Dallas Stars. With a 27-20-2 record and 56 points on the season, this opponent is positioned just three points back of the Los Angeles Kings, who hold the final playoff spot.
With the Kings also in action Wednesday, as they visit the Arizona Coyotes, this organization can’t afford to fall any further behind than it already has and will need to keep pace with the rest of the competition. Needless to say, a third straight loss won’t do their post-season chances any justice.
For a preview of this pivotal showdown, let’s explore three storylines ahead of this meeting between Winnipeg and Dallas.

One week ago, forward @Andrew Copp suffered an upper-body injury in a 6-3 winning effort over the Minnesota Wild and though he’s recovering, the 27-year-old isn’t ready to return just yet.
Skating on his own during his team’s morning skate, Copp was seen wearing a non-contact jersey, signalling he still has a few more steps to climb before being cleared for contact. Until then, the Jets must rely on a couple of their younger skaters to carry the load on the third line.
As of now, veteran @Adam Lowry will centre that unit alongside @Jansen Harkins and @Kristian Vesalainen. Together, this trio will attempt to provide a much-needed offensive boost within the bottom-six forward group that’s struggled to generate much offensive success for most of the campaign.
For the rest of the forward lines, here are Winnipeg’s projected line combinations:
@Paul Stastny – @Mark Scheifele – @Blake Wheeler
@Kyle Connor – @Pierre-Luc Dubois – @Evgeny Svechnikov
Harkins – Lowry – Vesalainen
@Adam Brooks – @Dominic Toninato – @Austin Poganski

Following a disappointing outcome against Calgary, interim coach Dave Lowry has decided to make a change on defence ahead of this tilt in Dallas, swapping out @Logan Stanley for @Nathan Beaulieu.
Regarding Stanley’s recent performance, his defensive results haven’t been very favourable since he returned to the line-up on Feb. 14. In the five games since then, the 23-year-old has been on the ice for the second-most shot attempts against (53), scoring chances against (51) and features the fourth-worst Expected Goals For Percentage (45.7) at all strengths among all Winnipeg defenders, according to NaturalStatTrick.com.
While Beaulieu doesn’t provide significantly more defensive upside – if any – over Stanley, it’s understandable as to why the coaching staff wants to slightly shake up its defensive combinations.
Providing defenceman @Nate Schmidt with a new linemate, Beaulieu, who hasn’t played since Jan. 27, will re-enter the line-up and skate on the club’s third defensive pairing. In addition, he’ll also likely operate a role on one of the two penalty-killing units, as well.
Overall, here are the Jets’ projected defensive pairings ahead of puck drop:
@Josh Morrissey – @Dylan DeMelo
@Brenden Dillon – @Neal Pionk
Beaulieu – Schmidt

Importance of Scoring First Against Stars

Lately, registering the first goal of the game has been a major issue for the Jets, which has forced them to play from behind in six of their last seven games.
Since Feb. 11, this team has been scored on first six separate times – the most in the league during this span. Thankfully, however, they’ve rallied back from their early deficits to win three of those six contests, including their victories against the Wild, Nashville Predators and Seattle Kraken.
Even though Winnipeg is capable of turning its fate around mid-game, continuing down this path isn’t something that usually results in winning streaks. For a franchise that desperately needs to string wins together, playing catch-up hockey is a trend that can’t continue for this group.
In saying that, preventing Dallas’ skaters from scoring first has been challenging for most opposing teams this season, and will likely remain a difficult task Wednesday night. In total, their franchise has scored the opening goal in 29 of their 49 games, tying them for fourth-most in that department.
Let’s hope the Jets can alter this narrative by arriving on time and starting strong out of the gate during this matchup.
More from Jets Nation:
Uncategorized
Recent articles from Thomas Hall