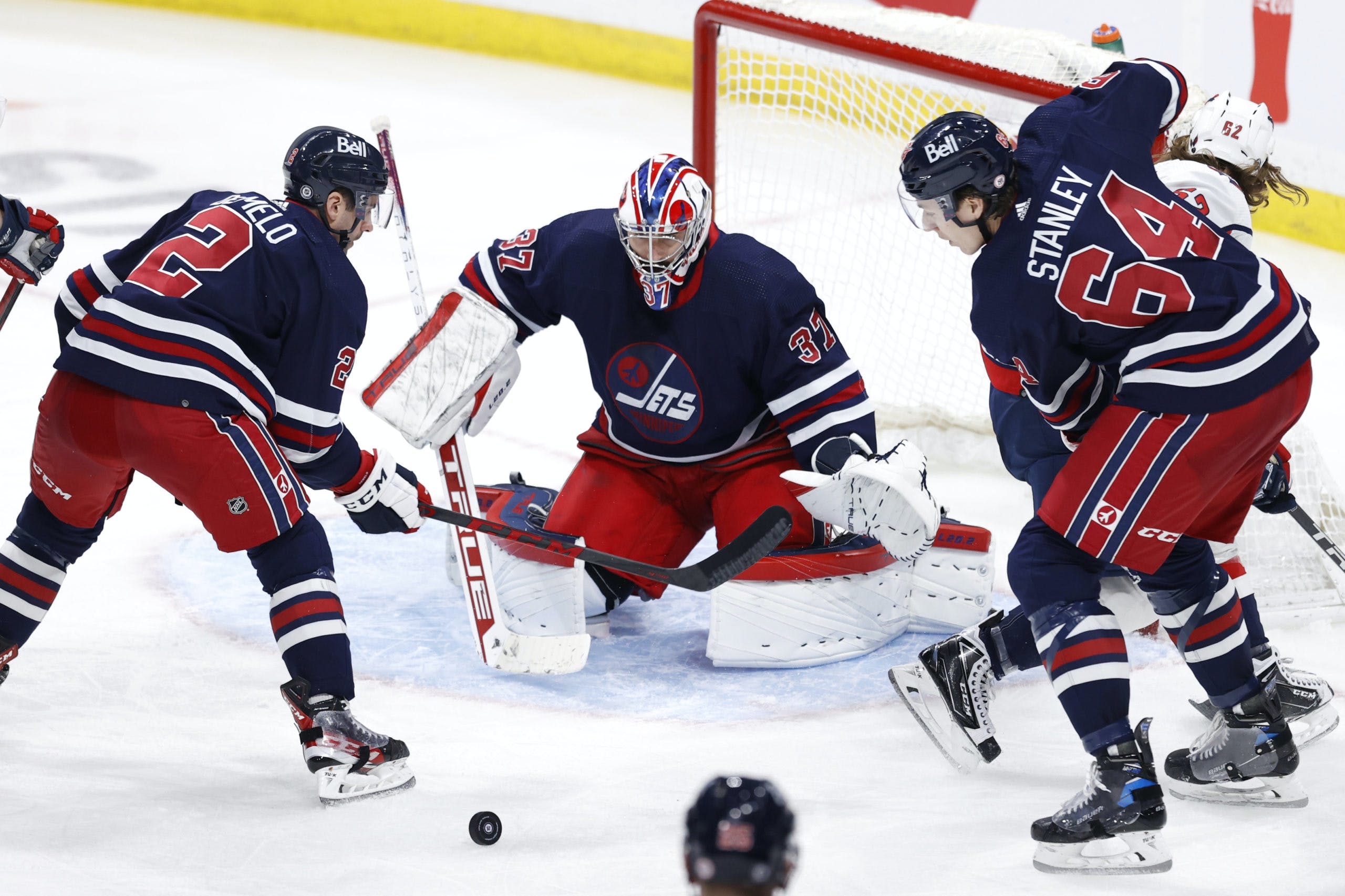 By Thomas Hall
10 months ago
Coming off a four-day break after blanking the Detroit Red Wings 3-0, the Winnipeg Jets are hitting the road once again as they’re set to begin a four-game stretch away from home Tuesday night.
In what’ll be their fifth consecutive road matchup, the Jets are scheduled to renew acquaintances with the Washington Capitals, who came away with a 5-2 victory during Dave Lowry’s first game as interim head coach back on Dec. 17.
Suffice to say, it’s time for the Jets to exact some payback in favour of their new bench boss.
For Washington, they certainly haven’t begun 2022 on a positive note as they enter this contest having lost five of their last six games since the new year commenced. Still, they remain one of the leading teams in the Metropolitan Division and are currently positioned third with a 21-9-9 record. So they definitely can’t be taken lightly despite their recent woes.
Digging deeper into this upcoming showdown, let’s explore three storylines heading into this final meeting of 2021-22 between the Jets and Capitals.

After missing last Thursday’s matchup against the Detroit Red Wings due to COVID-19, the Jets are about to receive some reinforcements as @Nikolaj Ehlers, @Logan Stanley and @Kristian Reichel will all be returning to the line-up Tuesday.
Most notably, reinserting Ehlers into the club’s top six should provide this team with a massive boost, one they’ll desperately need against the Capitals. Though the 25-year-old has only scored one point in three games this month, considering he’ll be positioned alongside teammates @Andrew Copp and @Mark Scheifele, he should be poised to break through during this contest.
As for Stanley, the 23-year-old will return to his usual role on Winnipeg’s third defensive pairing, where he’ll skate alongside @Nate Schmidt. There, this duo will attempt to recreate the chemistry they formed together before the towering 6’7″ blueliner landed on the league’s COVID list.
Here are the rest of Winnipeg’s projected line combinations:
Copp – Scheifele – Ehlers
@Kyle Connor – @Pierre-Luc Dubois – @Cole Perfetti
@Jansen Harkins – @Adam Lowry – @Austin Poganski
@Kristian Vesalainen – @Dominic Toninato – Reichel
@Josh Morrissey – @Dylan DeMelo
@Dylan Samberg – @Neal Pionk
Stanley – Schmidt

While three skaters will be returning to the Jets’ line-up Tuesday, unfortunately, defenceman @Brenden Dillon won’t be one of them as he remains in COVID protocol and won’t be eligible to suit up against the Capitals.
Despite travelling to Washington, Dillon hasn’t cleared out of protocol and is set to miss a second consecutive game. Having said that, it doesn’t seem like his return is too far away, especially since Lowry admitted the veteran blueliner would’ve played if he had been able to receive clearance from team doctors.
Based on that information, there might be a chance the 31-year-old makes his return Thursday when his team visits the Nashville Predators. But we’ll have to wait and see on that front.
In the meantime, Samberg will continue serving as Dillon’s replacement next to Pionk, and will also likely spend some time killing penalties once again. After logging nearly 18:00 minutes of ice-time during his NHL debut, where he registered his first career point, there’s a strong chance the 22-year-old could earn a similar amount of action this time around, as well.
With that in mind, it’ll be very interesting to see how the rookie responds when tasked with facing a much tougher opponent, particularly if he matches up against captain @Alex Ovechkin.

Continuing along this thread of injury/COVID-related updates, Winnipeg also released some very encouraging news regarding three of its forwards – including @Blake Wheeler, @Paul Stastny and @Evgeny Svechnikov.
Starting with the Jets’ captain, Wheeler ditched his non-contact jersey – which he wore Monday – prior to Tuesday’s morning skate and was back wearing a regular practice sweater at Capital One Arena. Despite this positive development, Lowry said the veteran forward still requires a few more practices to get back up to game speed before he can be cleared for game action.
Moving down the list, Stastny has exited COVID protocol but hasn’t skated since entering isolation on Jan. 13. As a result, the 36-year-old will need to resume skating with his teammates for at least a few days before he can re-enter this club’s line-up.
In regards to Svechnikov, who suffered an upper-body injury last game in Detroit, he also won’t be available for Tuesday in Washington and still needs a few extra recovery days. Once that happens, assuming the 25-year-old doesn’t experience any sort of setback “knock on wood” between now and then, he shouldn’t be sidelined for an extended time.
All in all, by the sounds of it, the Jets could potentially return to full strength by the time they return home for a clash against the Florida Panthers on Jan. 25, that is, if that game is played, of course.
Uncategorized
Recent articles from Thomas Hall