After Passing Through Waivers, F Mathieu Perreault Extremely ‘Happy’ About Staying With Jets 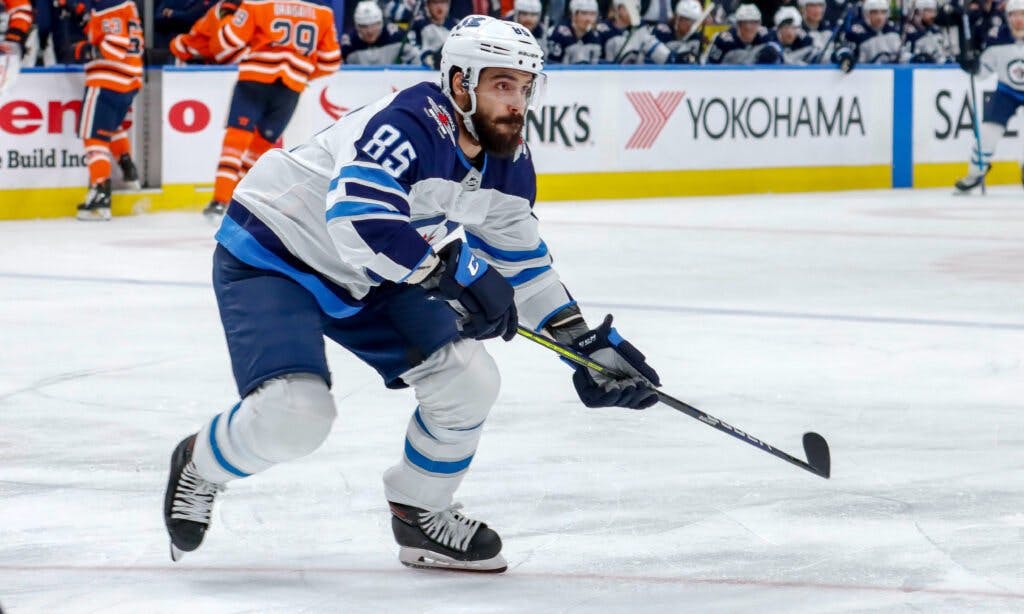 By Thomas Hall
1 year ago
Just a few days away from the regular-season opener, the Winnipeg Jets are running through their final preparations for the upcoming season, which includes trimming their roster down to 23 players and building a “taxi squad.”
Introducing a new system for just the 2020-21 campaign, all 31 teams in the league will be able to construct a separate unit of players that can remain with their respective teams and can easily be promoted to the NHL if needed. For the Jets, this means they’ll have up to six different skaters at their disposal who can be slotted directly into the lineup if someone needs to be placed on the injured reserve or the COVID-19 list at some point this season.
While this process will probably prove to be extremely helpful, there’s one catch to it, any skater that would need to pass through waivers to be sent down to the AHL would also need to pass through them before being placed on the taxi squad.
Considering the Jets entered training camp a little bit over the $81.5 million salary cap, they needed to reduce their payroll ahead of Tuesday’s roster deadline. Unfortunately, that meant forward @Mathieu Perreault would need to be placed on waivers, although the 33-year old passed through and he couldn’t be happier about staying with this team.
“It’s been a little crazy,” Perreault explained. “When I heard about it yesterday, I wasn’t really excited about it, obviously. But, it was a cap situation, something they had to go ahead with. But finding out that I was staying here this morning, I was pretty happy.”
Originally set to make $4.125 million this season, Perreault’s salary won’t count against the salary cap for the time being, which allows the Jets to sneak under that $81.5 million threshold. But once they place forward @Bryan Little’s $5.29 million salary on the long-term injured reserve, then they’ll have enough cap space to promote the 5-foot-10 forward back to the active roster.
Even though he met with the front office and fully understood the situation, the veteran forward still felt a little eerie about his future in the “true north” and wasn’t exactly sure what it’d mean for his family. But once he heard the news about passing through waivers Tuesday morning, the Quebec native was able to let out a huge sigh of relief and turned his focus back on the 2020-21 campaign.
“It’s a weird feeling, a little nervous I would say,” Perreault discussed. “For me here with my family, it really wouldn’t have been an ideal situation for me to have to go somewhere else. So that part of it got me a little nervous, but it’s just part of this business, I understand it. [I’m] just glad that I’m still here.”
Over his 49 games last season, Perreault averaged 13:06 minutes of ice time per game, producing seven goals, 15 points, two power-play points, 0.14 goals per game, 0.31 points per game, 71 shots on net, 69 hits, 19 blocks, 17 takeaways, and a 68.4% faceoff percentage.
Without any preseason contests due to the COVID-19 pandemic, every skater across the league will likely be extremely excited to finally participate in a live game once the regular season opens. Since the Jets’ first matchup of the season will come against the Calgary Flames – who eliminated them from last season’s playoffs – Perreault expects there to be a ton of intensity when his team takes the ice on opening night.
“It’s probably going to be similar to what we saw in the playoffs in the bubble,” Perreault detailed. “High pace, I’m assuming everybody is going to be really excited for that first game. So you’re going to have that adrenaline going through your body on both sides.”
Jets News
Recent articles from Thomas Hall