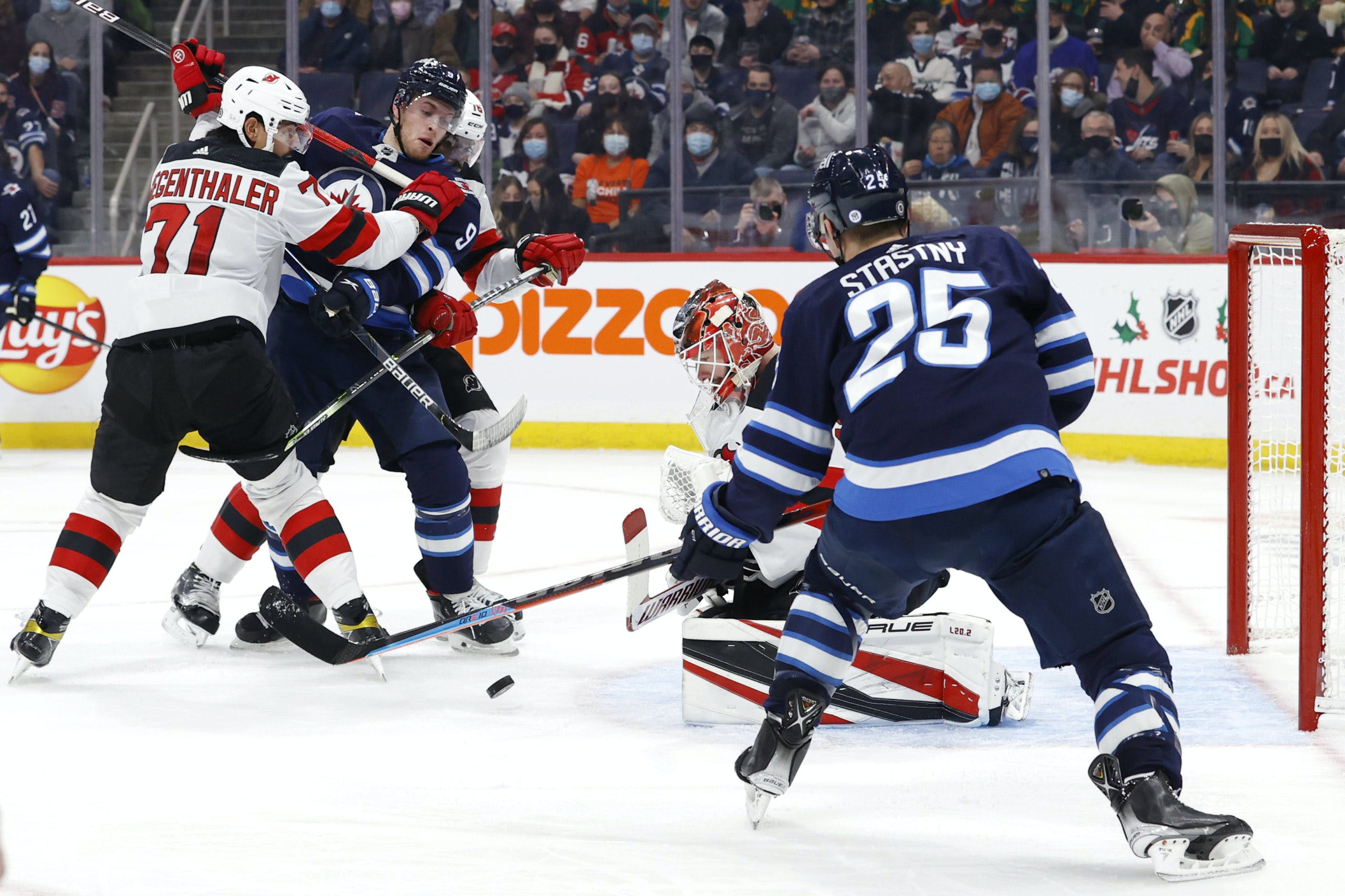 No, the Winnipeg Jets aren’t travelling to Seaside Heights, however, they’re headed to New Jersey to take on the rebuilding Devils on Thursday, beginning the first half of a back-to-back series.

Fresh off a 7-4 victory over the two-time defending Stanley Cup champions, this club is set to open a three-game road trip against one of the many bottom feeders in the NHL. With a miserable 21-31-5 record and 47 points, the Devils currently find themselves positioned seventh-last in the league – a spot they’ve become pretty familiar with in recent years.

That being said, the Jets shouldn’t throw stones as they’re also far outside a playoff spot and barring some sort of late surge, their season will come to an end after April, too. In the meantime, however, there’s still a game to be played and skaters to be showcased before the 2022 Trade Deadline arrives.

With forwards @Andrew Copp and @Paul Stastny at the front of most trade discussions involving Winnipeg, there’s sure to be plenty of eyes on both players throughout this road trip.

Diving into this upcoming contest, here are three storylines ahead of puck drop between the Jets and Devils:

There’s only a week and a half remaining before the 2022 Trade Deadline passes. For general manager Kevin Cheveldayoff, standing pat likely isn’t an option, though, acting as buyers probably isn’t either. By process of elimination, Winnipeg is almost certainly slated to become a seller by Mar. 21.

If that’s indeed the case, the front office will more than likely attempt to sell off its impending free agents – including Stastny and Copp. Luckily, the 36-year-old has struck fire at the perfect time and is seemingly increasing his worth each game.

Performing like he wants to be traded, Stastny has enjoyed a very productive stretch over his previous five games, creating five goals and seven points during this span. Expanding on these metrics, four of those seven points have occurred at even-strength as he’s thrived on the club’s top line next to teammates @Mark Scheifele and @Blake Wheeler.

On the season, the left-hander has surpassed his goal total (13) from last season by four additional markers, and has done so in 10 fewer games. In addition, he’s also matched his point total (29) from a season ago, putting him on pace to record his highest total since the 2015-16 campaign, where he reached 49 points.

Though Stastny has only compiled one goal and nine points across 17 career contests against New Jersey, based on his recent success, he figures to be a strong offensive component once again Thursday night.

Earlier this season, the Jets were one of the worst teams in the league at killing penalties with former coach Paul Maurice at the helm, although things have quickly changed for the better since interim coach Dave Lowry took over.

Overcoming their previous woes, this club has transformed into an elite penalty-killing squad, as they’ve posted the fifth-highest success rate (84.3 per-cent) among all 32 franchises since Jan. 1. In comparison, they ranked 31st in the league before Maurice resigned on Dec. 17.

One of the biggest changes that Lowry has made to this group revolves around utilizing top-six forwards on the penalty kill. Rather than shying away from this idea, which Maurice did, he’s embraced it and has provided forward @Kyle Connor with an opportunity to flourish under his extended role.

Whether he’s been paired next to teammates Copp or @Adam Lowry, Connor has excelled at killing penalties with his impressive quickness and stick-checking. Sticking to his roots, the 25-year-old has also added a much-needed offensive spark to Winnipeg’s penalty kill, as he’s registered a pair of shorthanded goals – one of which came last game against Tampa Bay.

Considering the Devils feature a mediocre 18.9 per-cent power-play percentage this season, chances are this matchup should be another opportunity for the Jets to showcase their skills while shorthanded.

Potential for Another High-Scoring Affair

Needless to say, the Jets have been involved in a couple of barn burners this month, including an 8-4 victory over the Montreal Canadiens and their most recent 7-4 win against the Tampa Bay Lightning. That’s a ton of goals scored and allowed in just two games.

Oh, and then there was the thriller against the Devils back in December, which saw this club come away with another 8-4 victory. In that rollercoaster showdown, this ‘True North’ squad coughed up an early 3-0 lead before marching back to score five unanswered goals to conclude regulation.

Could we witness a similar outcome Thursday? Perhaps, although hopefully it results in another victory for Winnipeg.

Following @Nikolaj Ehlers’ return, the Jets are currently operating with three talented forward lines amongst their top-nine mix, however, scoring at even-strength remains an area of concern. Still, it might be possible to change that narrative during this upcoming clash at the Prudential Center.