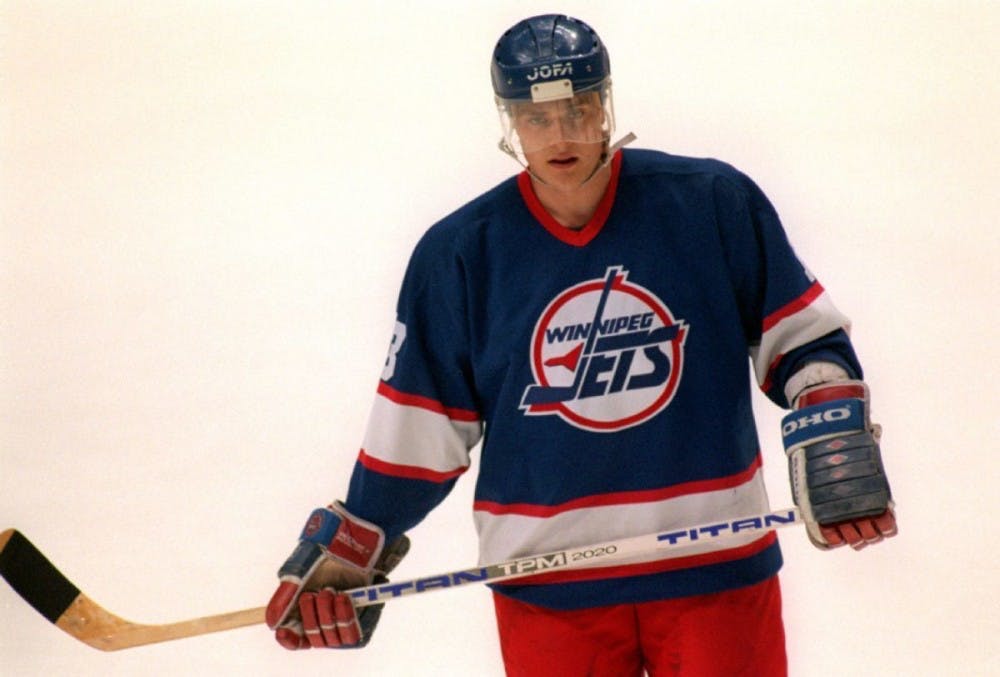 By Jason Gregor
2 years ago
Comments
The Nation Network’s series on the seven Canadian franchise’s all-time rosters of drafted players stops in Winnipeg today. While unrestricted free agency gets more focus each summer, the draft is much more important to an organization’s long-term success.
Winnipeg is in a very unique situation, because technically they are home to two different franchises. So today we will have a roster for the Winnipeg/Arizona franchise, as well as one for Atlanta/Winnipeg.
The rules:
1. The player had to be drafted by the organization. It doesn’t include WHA players like Bobby Hull, Anders Hedberg or Ulf Nilsson.
2. Players need to be slotted in the position they played the most. Mark Messier, for instance, did play left wing early in his career, but he is a centre.
3. We are picking the best possible lineup, similar to the Olympic rosters. Players who had the best career, even if the majority wasn’t with the organization who drafted them.
4. For organizations like the Jets, who were in two different cities, their all-time roster includes players drafted by Winnipeg/Arizona and Atlanta/Winnipeg.
5. We didn’t pick any extra skaters, just a 20-man roster.
Advertisement
Ad
Advertisement
Ad
The original Jets have been involved in 41 drafts dating back to 1979. Winnipeg from 1979-1995 and Arizona from 1996-present.  For this project we are focusing on the NHL amateur draft (1963-1978) and the NHL entry draft (1979-present). Here is the roster for the Winnipeg/Arizona franchise or Jets 1.0.

Nikolai Khabibulin (204th, 1992)
Bob Essensa (69th, 1983)
Khabibulin had a solid 18-year career in the NHL and was the unanimous choice. Essensa was the clear cut back up as well. Since Khabibulin was drafted in 1992, the only goalies to play 100 NHL games include Robert Esche (186), Louis Dominque (139) and Scott Darling (126).
Advertisement
Ad
Advertisement
Ad

The Jets scouting did a great job finding Hawerchuk, Tkachuk and Selanne. Two Hall of Famers and another who might get in.
The Jets drafting didn’t get off to a great start in 1979 when they took Jimmy Mann in the first round. In arguably the best draft in NHL history, the Jets took Mann 19th and he only scored 10 goals in his career. He was tough, but not very skilled. Michel Goulet and Kevin Lowe, two Hall of Famers, went 20th and 21st.
But they took Christian in the second round and Steen in the fifth, and then over the next three seasons they drafted Babych, Hawerchuk, Mullen, Ellett, Moe Mantha and Scott Arniel. That built the foundation of their team, which was quite good, except they were in the toughest division in hockey in the 1980s and could never defeat both the Calgary Flames and Edmonton Oilers in the same year.
Advertisement
Ad
Advertisement
Ad
The Jets rarely had a bust of a draft year. If they missed on a first round, they would land Olausson or Numminen later. The 1983 draft hurt them when they had the eighth and 14th picks and selected Andrew McBain and Bobby Dollas. Both played over 600 NHL games, and were solid NHLers, but Cam Neely went ninth, Dave Gagner 12th and Dan Quinn 13th.
The 1994 draft only produced Deron Quint, and that would be the weakest class they had until moving to Arizona.
Arizona didn’t have nearly the same success. They drafted Briere in 1996, but from 1997-2004 the best NHL players they selected were Ossi Vaananen, Frederik Sjostrom and Ben Eager. A main reason the Coyotes struggled from 2003-2009 was their lack of drafting.
Then they drafted Wheeler (although he never played a game for them), Yandle, Hanzel, Daniel Winnik, Turris, Boedker, Ekman-Larsson and Michaeal Stone between 2004-2009, and they got some traction again.
Advertisement
Ad
Advertisement
Ad
The Winnipeg scouting results were much better than the Arizona ones overall.

Their first draft was in 1999 and they have had 21 drafts — a much shorter window than Jets 1.0, and so the depth isn’t there in some spots, but they’ve made pretty good draft picks.

Tobias Enstrom (239th, 2003) — Jacob Trouba (9th, 2012)
Josh Morrissey (13th, 2013) — Zack Bogosian (3rd, 2008)
Braydon Coburn (8th, 2003) — Tucker Poolman (127th, 2013)
Enstrom was an excellent late round pick, while Trouba and Morrissey have lived up to expectations. Bogosian was rushed to the NHL at 18 — often a recipe for failure for defenceman — and he never became the player people expected. Coburn has had a very solid career, playing almost 1,000 games. Ben Chariot was a solid fourth option on the left side, and if we were allowing D-men to switch sides he would have made it, but he is mainly a left defender. Poolman makes it due to a lack of quality right shot defenders being drafted earlier. Vancouver and Edmonton each had rookies in their roster as well, and those teams have had many more drafts, so other teams have struggled to find quality D-men in the draft even longer.
Advertisement
Ad
Advertisement
Ad

Jets 2.0 have had 13 top-10 picks in 19 seasons, which illustrates they haven’t won very much despite making some quality early in the draft.
Atlanta made two great picks with Heatley and Kovalchuk, while Lehtonen and Coburn were solid. Their challenge was outside of Enstrom, MacKenzie, Chiarot, Dwyer, Garnet Exelby and Darcy Hordichuk they didn’t get much outside of the first round.
Winnipeg’s first few drafts produced Schiefele, Lowry, Trouba, Hellebuyck, Morrissey, Poolman, Andrew Copp, Ehlers, Connor, Roslovic and Laine. That is a nice range of forwards, D-men and a starting goaltender. They are a competitive team, but will need some of their picks from the past four seasons to develop if they hope to remain a quality team. Any extended drafting drought will inevitably cripple a franchise.
Advertisement
Ad
Advertisement
Ad
Winnipeg has to avoid repeating what Atlanta did. After landing some solid pieces early in the franchise history, their drafting fell off and eventually the team struggled. Winnipeg had an excellent start to their drafts, but now they are competitive and won’t get many top picks, so they need to find some quality players later in the draft.