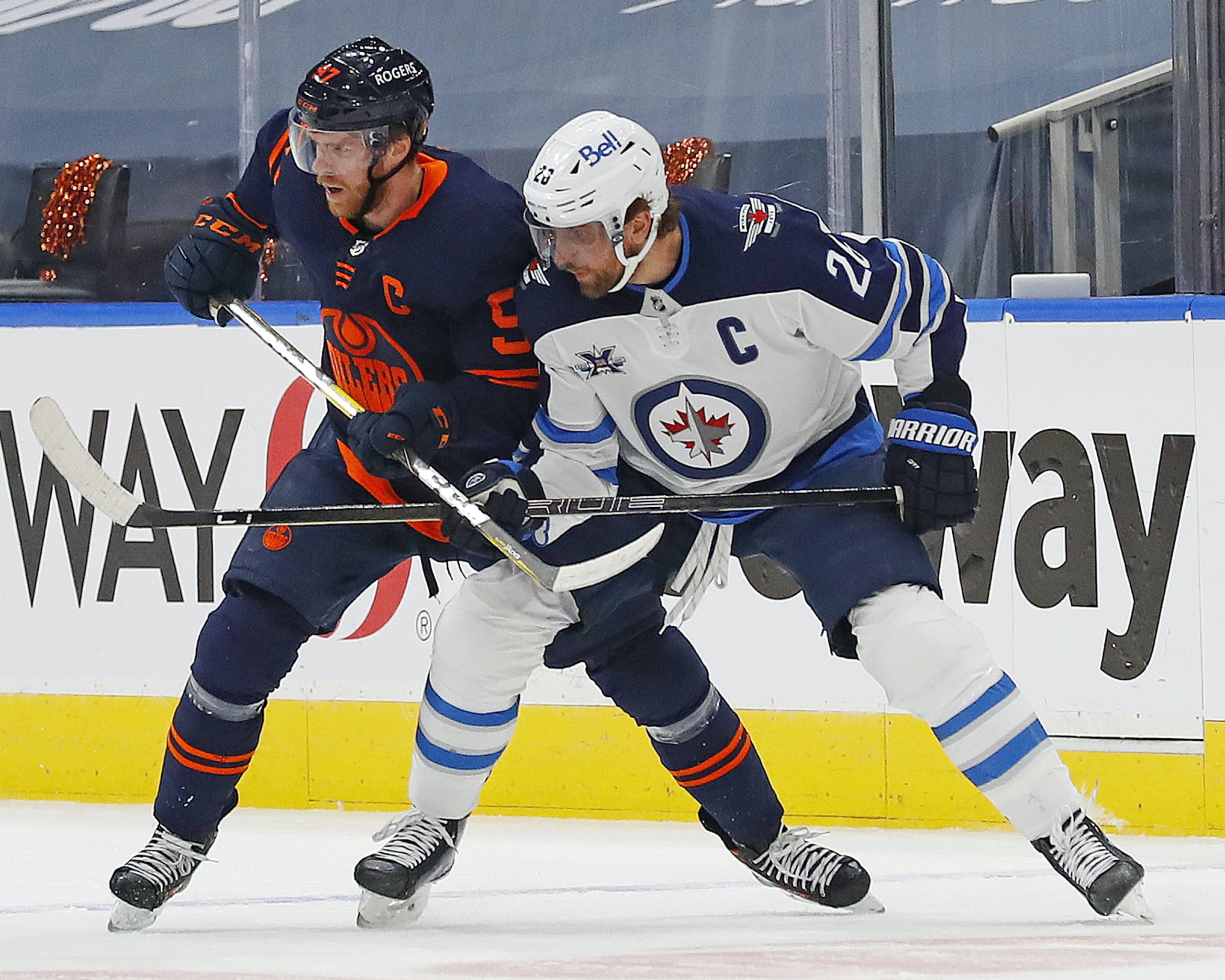 By Thomas Hall
9 months ago
Believe it or not, the Winnipeg Jets currently find themselves within range of a playoff spot and can increase their post-season chances with a third straight victory while hosting the Edmonton Oilers on Saturday.
Leading into this matinee showdown, the Jets are just five points back of the second wild-card seed in the West, which is controlled by the Los Angeles Kings. But with a win and a Kings loss, this franchise would trim that number down to three heading into the final week of February.
Despite this current two-game winning streak, it certainly won’t be easy to defeat the Oilers, who’re 4-0-0 under interim coach Jay Woodcroft. Since taking over from Dave Tippett, Woodcroft’s team is scoring 4.5 goals per game while allowing just 1.5 per night.
Yes, this probably isn’t the best time to be facing Edmonton.
Nevertheless, let’s explore three skaters that could potentially help extend Winnipeg’s winning streak to three games.

Last Game: One goal, two points, four shots, 21:18 minutes
Serving as one of the leading offensive forces, captain @Blake Wheeler has been sensational since returning from the All-Star break and doesn’t appear ready to slow down anytime soon.
In his most recent performance, the 35-year-old continued to perform like a vintage version of himself, utilizing his playmaking skills to finish with a pair of points – including his fifth goal of 2021-22. Altogether, the 6’5″ forward has posted three goals and 12 points across six games in the unofficial second half.
Sure, Wheeler’s defensive flaws remain, especially while he’s positioned in the defensive zone, but there’s no doubt his recent scoring surge is allowing him to rebound from what was a miserable first half. Who would’ve thought that was possible, right?
While playing against Edmonton will surely be a fast-paced matchup, there’s no reason to believe that Winnipeg’s captain can’t make a strong impact during this contest.

Last Game: One assist, one hit, 11:56 minutes
Normally, forward @Kristian Reichel is likely someone most fans would never expect to make a considerable impact, and in most cases, they’d be correct. But with fellow rookie @Cole Perfetti sidelined with an upper-body injury, this could be the 23-year-old’s time to shine.
After Perfetti departed Thursday’s game in the third period, Reichel was called upon to fill in next to teammates @Kyle Connor and @Pierre-Luc Dubois. In his first shift with this group, the right-hander helped set up @Josh Morrissey’s game-winning goal, earning him his first career NHL assist.
Unless interim coach Dave Lowry opts to adjust his second line, the 6’0″ winger will likely return to this spot, providing him with a golden opportunity to showcase his skills in a top-six role. Considering almost everyone that’s been paired next to Connor and Dubois has enjoyed some level of success this season, the same can probably be expected this time around, as well.

Last Game (Feb. 16): 33 saves on 36 shots against, 17th victory of 2021-22
Following a well-deserved day off Thursday, goaltender @Connor Hellebuyck will return to his starter’s crease Saturday and it’s safe to say, he definitely has his work cut out for him against the Oilers.
Set to make his 41st start of the season, the 28-year-old will be matched up head-to-head against two of the best players in the league, @Connor McDavid and @Leon Draisaitl. While slowing down Edmonton’s offence can be a difficult task, the 6’4″ netminder performed fairly well in that department in each of the two previous meetings earlier this season.
Frustrating his opposition, Hellebuyck has allowed just three goals on 66 shots against during those two contests, resulting in a stellar 1.44 goals-against average and a .955 save percentage.
If this version of Hellebuyck shows up Saturday, paired with receiving quality support from his defenders, this could prove to be a thrilling showdown between the Jets and Oilers.
More from Jets Nation:
Uncategorized
Recent articles from Thomas Hall