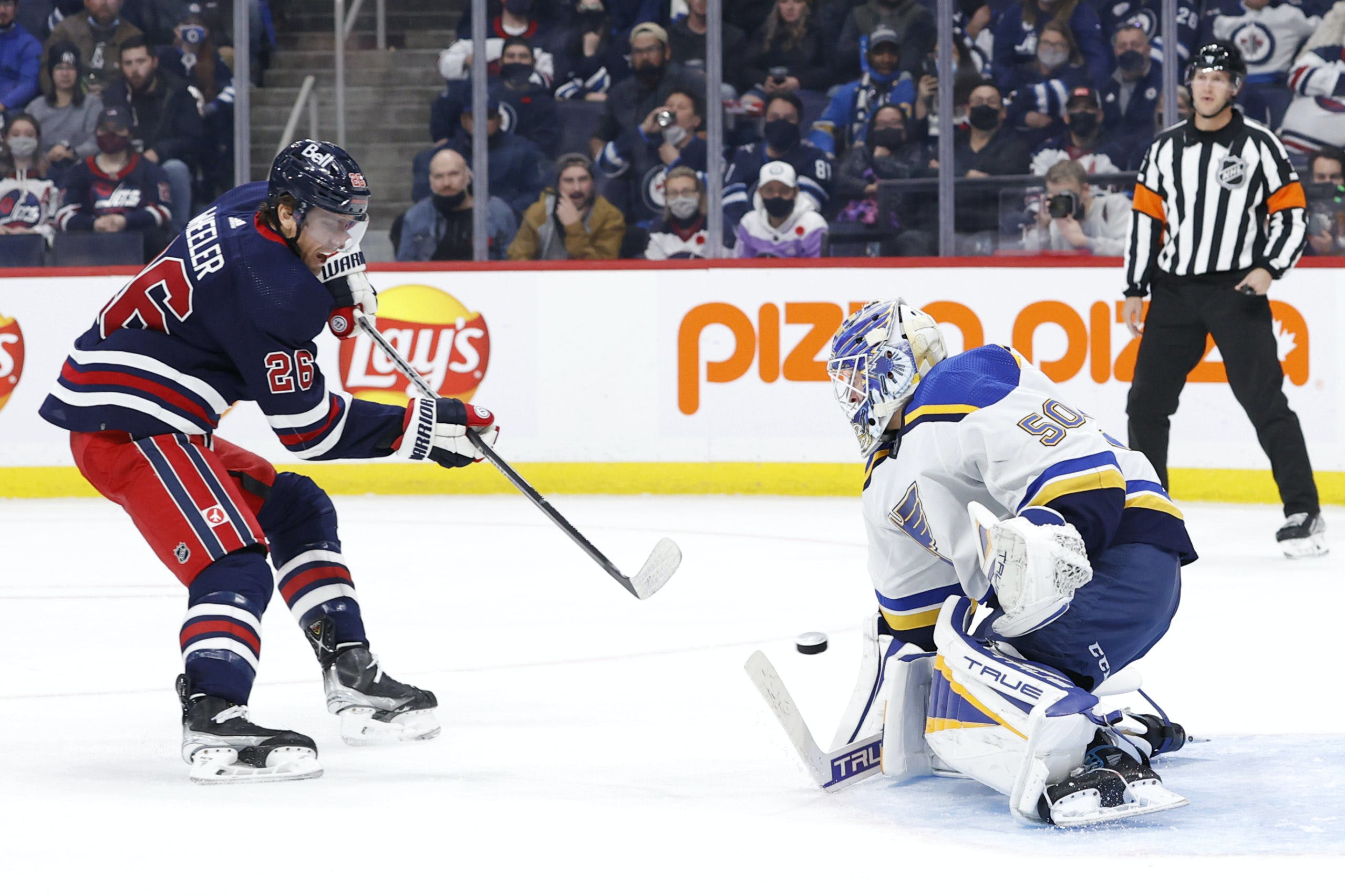 By Thomas Hall
10 months ago
Amid a six-game losing streak, the Winnipeg Jets will look for better fortune away from home as they’re set to wrap up the first half of the schedule with a two-game road trip, beginning with the St. Louis Blues on Saturday.
Fresh off a frustrating 5-1 loss to the Vancouver Canucks, the Jets are desperate to find any sort of success before the All-Star break, which includes attempting to locate an identity for themselves. While this club remains determined, accomplishing that feat could become fairly difficult against one of the top teams in the Central Division.
If things weren’t already tough enough for this franchise, they’ll be matched up with one of their rivals, in the Blues, who are currently three spots ahead of them in the division. Adding to this difficult task, this opponent also enters this showdown having won four of its previous five games – including a dominating 5-1 victory over the Calgary Flames last time out.
From Winnipeg’s standpoint, here are three skaters worth keeping an eye on during this Saturday afternoon affair:

Last Game: One assist, two shots, two blocks, one hit, 20:15 minutes
After missing over a month due to a lower-body injury, few people knew what to expect when captain @Blake Wheeler returned to the line-up on Jan. 22, but since then, the 35-year-old has been playing some of his best hockey of the season.
In his four games since returning from injury, Wheeler hasn’t been lighting the world on fire, however, he does possess one goal, three points and 11 shots on goal. Most notably, the 6’5″ forward’s net drives have been far more evident as of late, which was a major concern of his earlier in the campaign.
Sure, the right-hander’s quickness still hasn’t returned completely – and perhaps it never will. But so far, Winnipeg’s captain has been making a difference on the ice.
Preparing for his 37th career matchup against St. Louis, Wheeler could be poised to add to his already impressive totals, where he’s posted 16 goals and 40 points while facing this divisional opponent.

Last Game: Three shots, one hit, one block, 12:25 minutes
Set to appear in his third game with the Jets this season, defenceman @Ville Heinola’s return to the NHL certainly hasn’t gone as originally planned, at least, from an outsider’s perspective.
Thus far, the 20-year-old hasn’t been placed in a position to succeed as he’s been paired with a different teammate in each of his first two games, which has seen him skating next to the ineffective @Nathan Beaulieu at times. As a result, the top young defender has looked like a shell of his former self, appearing nervous almost every time the puck hits his stick.
Despite these struggles, with so many absences on the backend, the Jets will be forced to insert Heinola into their top-four mix on defence during this contest against the Blues. With that in mind, this could be the ideal opportunity for the left-hander to regain some confidence at the highest level of competition.

Last Game (AHL): One assist, 2:00 penalty minutes
Just one game after rookie @Johnathan Kovacevic made his NHL debut, the Jets are slated to call upon another one of their defensive prospects Saturday. While there hasn’t been any official announcement as to who that’ll be, Friday’s line combinations suggest it’ll likely end up being @Declan Chisholm.
Originally selected in the fifth round of the 2018 NHL Draft, Chisholm made his NHL debut earlier this month against the Detroit Red Wings, where he logged 13:44 minutes on the club’s bottom defensive pairing. Still, the 6’1″ blueliner led all Winnipeg defencemen in shots on goal (four) as his team came away with a 3-0 victory – that was also the last time they won, as well.
Hopefully, Chisholm can bring Winnipeg some good luck and help them snap this current six-game losing skid.
More from Jets Nation:
Uncategorized
Recent articles from Thomas Hall