What to expect from prospect Cole Perfetti in 2021-22? 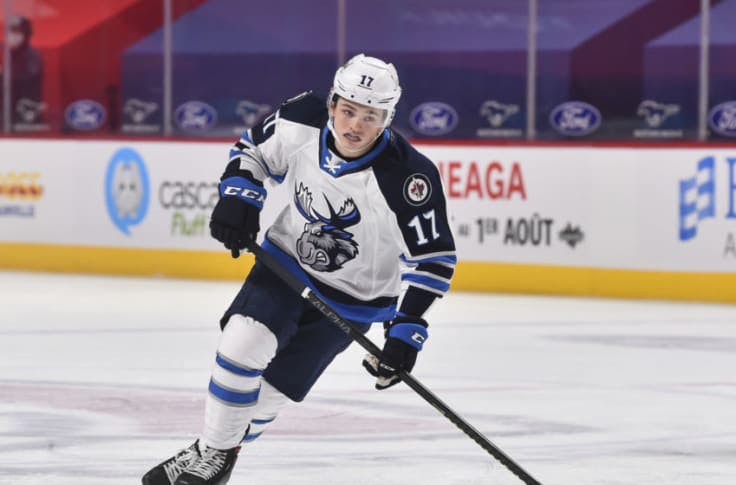 By Thomas Hall
1 year ago
Like for most people, the 2020-21 season was extremely unusual for highly-touted prospect @Cole Perfetti, whose first professional campaign was impacted significantly by the COVID-19 pandemic. But with some form of normalcy expected to return, the talented forward should be able to focus solely on his development this time around.
Perfetti, who was originally selected by the Winnipeg Jets in the first round of the 2020 NHL Draft, was eligible to return to the Ontario Hockey League last season and could’ve participated in his third season with the Saginaw Spirit. Unfortunately, league officials couldn’t reach an agreement with the provincial government, forcing a temporary COVID-related work stoppage.
Since returning the OHL wasn’t a viable option, the 19-year-old was limited to working out on his own last fall, which was obviously less than ideal. But once Team Canada’s training camp opened ahead of the 2021 World Junior Championships, he finally received an opportunity to practice with someone other than himself as he competed for a chance to represent his country.
Despite failing to earn a roster spot during the 2020 tournament, Perfetti was determined to make the team this time and that’s exactly what he did, which saw him serve a key role as Canada advanced to the Gold Medal Game. Though they ultimately felt short to Team USA, that heartbreaking outcome didn’t prevent the left-hander from excelling throughout the event, as he posted two goals and six points through seven contests.
Since the former first-round selection won’t turn 20-years-old until New Year’s Day 2022, he’ll be eligible to compete in this winter’s tournament for a final time, and based on his performance in 2021, his chances of representing his country for a second straight year appear to be pretty high.
Along with competing in the 2022 World Junior Championships, Perfetti will also likely receive an invite to his first National Hockey League training camp, which is scheduled to open later this month. While he almost certainly won’t earn a spot on the Jets’ roster, especially with coach Paul Maurice in charge, this opportunity could allow him to create stronger relationships with the coaching staff and some of his future teammates as well.
In all likelihood, the 5’10” forward will open the 2021-22 campaign in the American Hockey League with the Manitoba Moose, where he enjoyed an extremely successful performance last season. Granted, he only competed against four other teams (Toronto Marlies, Stockton Heat, Laval Rocket and Belleville Senators), but that shouldn’t take away from his impressive offensive showing.
Proving to be a major scoring threat, Perfetti finished first on the team in power-play points (13), second in total points (26), tied for second in power-play goals (four) and game-winning goals (two), third in total goals (nine) and fifth in shots on goal (64) among all Moose skaters, according to AHL.com.
Considering Manitoba’s schedule will be returning to 72 games this season, there’s a pretty strong chance the top young prospect will be able to build off these encouraging metrics, allowing him to continue serving as a reliable offensive weapon during both five-on-five situations and power-play opportunities.
Even though Perfetti is expected to spend a second straight campaign with the Moose, it’s also possible he could be called upon at some point to make his NHL debut in 2021-22. While the Jets feature plenty of talented forwards within their top-six, the loss of @Mason Appleton has created some uncertainty on the club’s third line, which could potentially open the door for the former Spirit.
As of right now, players like @Kristian Vesalainen, @Riley Nash, @Jansen Harkins and @Dominic Toninato are slated to compete for that role alongside veterans @Andrew Copp and @Adam Lowry. But if this team receives inconsistent production from that spot during the season, then perhaps that could allow Perfetti to showcase his skills in a bottom-six role.
From a skillset standpoint, the soon-to-be 20-year-old is probably capable of suiting up in a considerable number of NHL games this season, however, there’s no question his contract status will likely factor into this equation, just like it has for other young skaters in this organization. Since the clock on his entry-level deal hasn’t started yet, it’d be extremely unlikely to see him play more than 10 games with the Jets, allowing his contract to slide for a second straight campaign.
In saying that, Perfetti certainly has a bright future ahead of him and doesn’t appear to be too far away from breaking into the highest level of competition, he’ll likely just need to bide his time in the AHL for a little while longer.
Uncategorized
Recent articles from Thomas Hall