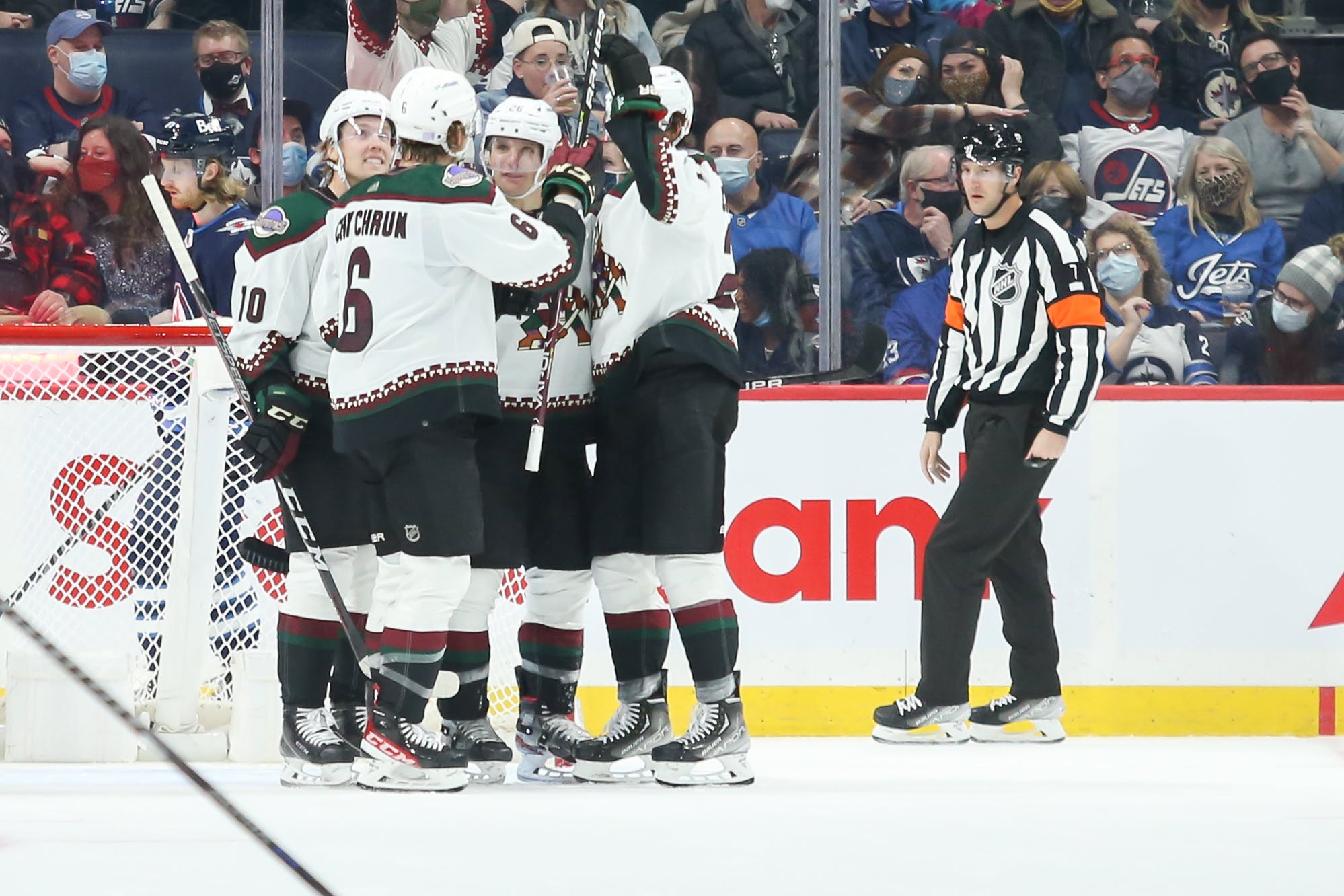 By Thomas Hall
1 year ago
Most people say Mondays are like snooze days, well, that’s exactly how this matchup between the Winnipeg Jets and Arizona Coyotes will be remembered as – a game that just couldn’t wake up.
Coming off a 4-2 victory over the Calgary Flames, one would think the Jets would’ve been able to carry some of that momentum into this contest, especially against the rebuilding Coyotes. And yet, the home team looked fatigued, out of sync in the offensive zone and downright defeated at times throughout this energy-less performance.
Since this club wasn’t able to generate enough consistent pressure from quality scoring areas, they were ultimately held off the score sheet for the second time in four games, proving to be one of their worst losses of the season.
As for the top performers from this showdown – there weren’t many – here are the three stars of the game from the Jets’ disappointing 1-0 defeat against the Coyotes.

Stat Line:
Stopped all 46 shots against, first career shutout
Performance:
Prior to this contest, not many hockey fans in the Manitoba area likely knew the name @Karel Vejmelka, and rightly so, given he’s a rookie in the National Hockey League. But following his first career start against the Jets, they probably won’t be forgetting his name any time soon.
Despite being peppered with shots through all three periods, the 25-year-old didn’t appear to be phased at any point throughout this game, as he stopped all 46 shots against. Thanks to a handful of key saves while shorthanded in the third period, the 6’4″ netminder was able to keep his opponent scoreless, earning him his first career shutout.
All in all, Vejmelka’s 14th career NHL contest will surely be one he’ll cherish for many years to come.

Stat Line:
One goal, two shots on goal, two blocks, one hit, 12:28 minutes of ice-time
Performance:
In what proved to be a low-scoring affair, saw forward @Antoine Roussel register the only goal of this contest, which occurred near the end of the second period.
With @Nikolaj Ehlers attempting to flip the puck across the ice in the neutral zone, unfortunately, his passing attempt was intercepted and quickly led to a line rush for the Coyotes. As a result, @Loui Eriksson was able to send a cross-ice pass into the slot, where Roussel redirected the puck past @Connor Hellebuyck for the score.
Though that was his only notable moment on the night, however, it served as the difference-maker on the scoreboard, making for the 32-year-old’s first game-winning goal of 2021-22.

Stat Line:
Five shots on goal, three high-danger scoring chances, one block, 17:40 minutes of ice-time
Performance:
In all honesty, it was pretty difficult to name the third star of this game. In saying that, there was one player on Winnipeg’s roster that – analytically – stood out in a pretty notable way.
While the Jets couldn’t break through against Vejmelka on Monday, forward @Pierre-Luc Dubois certainly tried his best to help put his team on the scoreboard, as he acted as one of their top performers in this losing effort.
Despite failing to register a single point, the 23-year-old posted a team-high three high-danger chances at 5-on-5, according to NaturalStatTrick.com. Additionally, he also finished with the second-highest individual expected goals rate (0.48) during those same situations, although extending his point streak to three games just couldn’t come to fruition.
Uncategorized
Recent articles from Thomas Hall