Three Takeaways From Jets Game One Victory Against Oilers 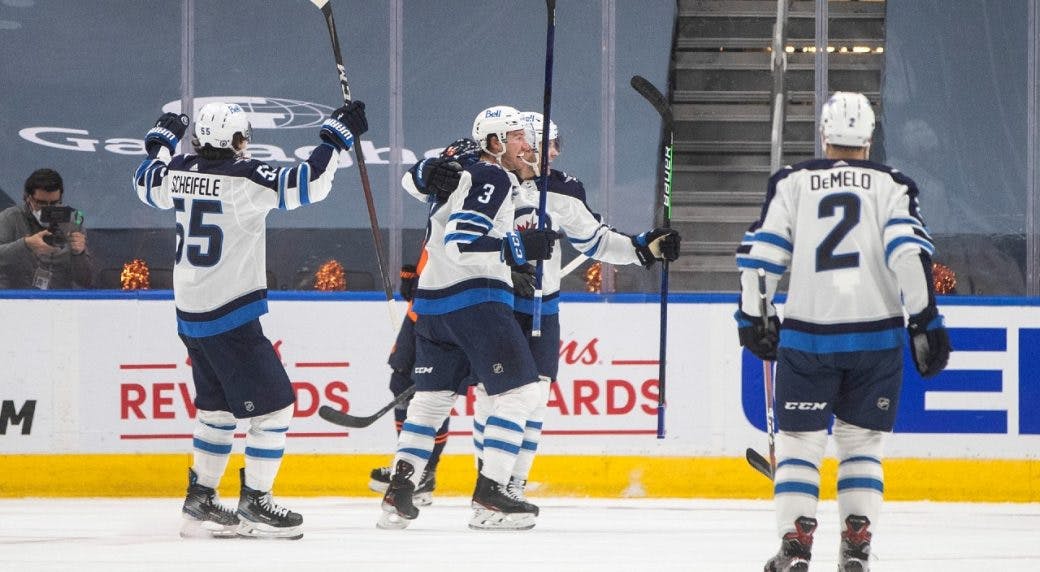 By Thomas Hall
1 year ago
After finishing the regular season back on May 14, the Winnipeg Jets were forced to take an extended layoff prior to the start of the Stanley Cup Playoffs, but they were finally back on the ice Wednesday night and Game One against the Edmonton Oilers certainly didn’t disappoint.
Following an extremely physical opening period, which saw these two clubs combined for 50 hits, Winnipeg and Edmonton traded goals in the second period, causing this game to be tied at one goal apiece heading into the final 20 minutes. But thanks to three unanswered goals from @Kyle Connor, @Blake Wheeler and @Dominic Toninato, the away team was able to come out victorious in the series opener, which is something almost no one expected them to accomplish.
Here are three takeaways from the Jets’ 4-1 victory against the Oilers:

One of the biggest reasons playoff hockey is cherished across the globe is because it’s unscripted and usually features a handful of unsung heroes every single year. Well, Wednesday’s victory over the Oilers proved to be another great example of that unpredictability, as the Jets received unlikely offensive production from skaters like @Tucker Poolman (one goal), @Nate Thompson (two assists) and Toninato (game-winning goal), who played just two regular season games this season.
Most notably, Poolman’s second-period goal was particularly special as it not only tied the game, but it was also his first marker of 2021 and his first career playoff goal as well. As for Toninato, the 27-year-old played more games with the Manitoba Moose than with the Jets this season, and yet, his ability to deflect rookie @Logan Stanley’s blast from the point ultimately proved to be the difference-maker in this showdown.

2. Too Many Ugly Defensive Zone Exits

Entering the postseason, Winnipeg was aiming to improve its performance in the defensive zone, focusing on exiting their zone more effectively and reducing the number of turnovers committed within that area. Making only minimal gains in that department, this team still struggled to move the puck out of the defensive zone and coughed up possession numerous times, allowing Edmonton’s skaters to spend additional time in the offensive zone.
Committing a costly turnover in the second period, defenseman @Dylan DeMelo lost the puck while skating above the red line in his own zone, ultimately allowing forward @Jesse Puljujarvi to gain possession to score his first career playoff goal. Then in the final frame, defenseman @Josh Morrissey was attempting to send the puck into the neutral zone but turned it over along the boards, which provided forward @Leon Draisaitl with a high-danger scoring chance that could’ve tied the game.

With forwards @Pierre-Luc Dubois and @Nikolaj Ehlers ruled out for Game One of this series, the Jets were forced to call upon @Kristian Vesalainen to serve as an injury replacement on the second line and the youngster surprised most experts with a solid postseason debut. After receiving just 8:41 minutes of ice time per game during the regular season, the 21-year-old played 15:22 minutes in the series opener and created two shots on goal, one scoring chance, two hits, two blocks and two takeaways.
While these metrics might not jump off the page, Vesalainen made his presence felt in the first period and recorded one of the best scoring chances in the opening 20 minutes, as he skated on a two-on-one rush with Toninato and nearly fired his shot past goaltender @Mike Smith. Later in the opening frame, the former first-round selection sent a perfect pass over to @Mark Scheifele, who was positioned in the slot and released a quick shot into Smith’s chest.

Following an off-day on Thursday, the Jets and Oilers will be back in action for Game Two on Friday at 8 pm CT.
Uncategorized
Recent articles from Thomas Hall