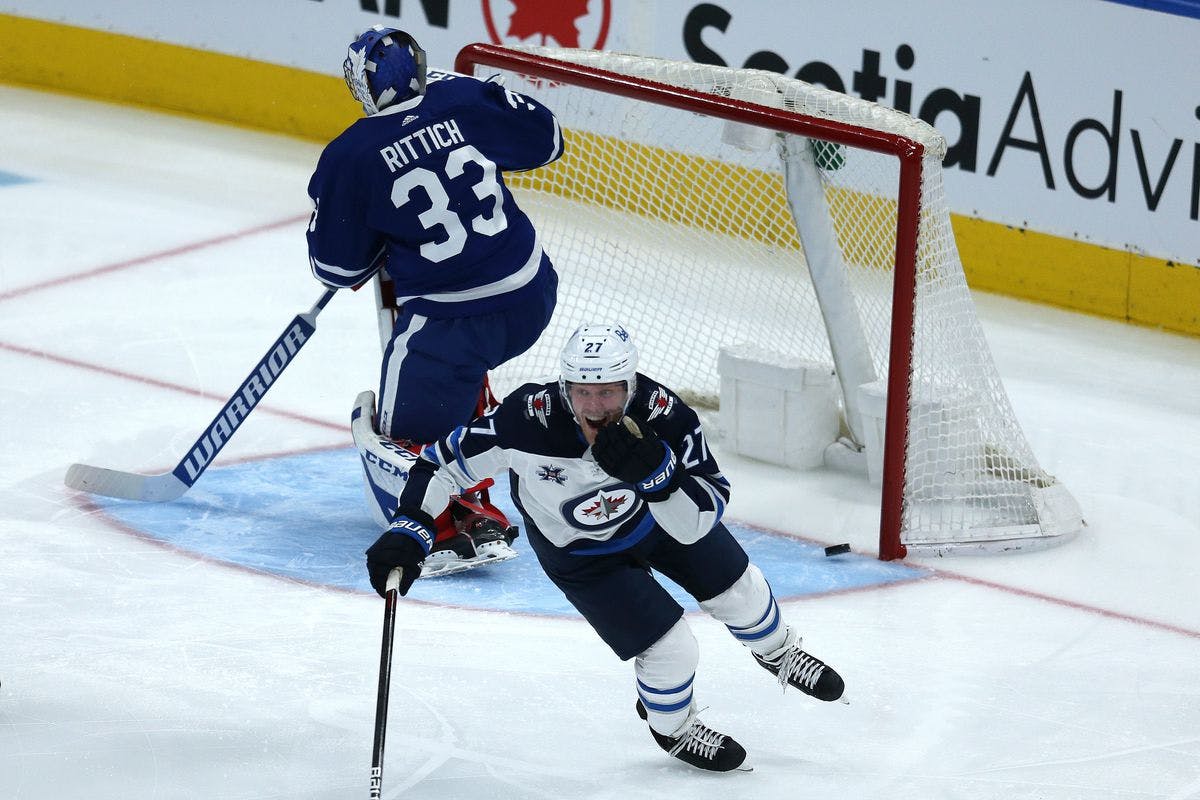 By Thomas Hall
1 year ago
After defeating the Ottawa Senators 3-2 during the first half of this back-to-back series, the Winnipeg Jets hit the road once again and were scheduled to conclude this series against the Toronto Maple Leafs Thursday, which probably couldn’t have gone any better… or maybe it could have.
If you like scoring, then the first period would’ve been right up your alley, as Winnipeg controlled a 3-1 lead after 20 minutes of play. While Toronto’s captain, @John Tavares, scored the lone goal in the second period, forwards @Nikolaj Ehlers and @Kyle Connor each scored their second goals of the game in the final frame, ultimately earning their team a much-needed victory at the Scotiabank Arena.
Here are three takeaways from the Jets’ 5-2 victory against the Maple Leafs:

Struggling out of the gate, the Jets allowed the game’s opening goal and were also charged with a holding penalty just three minutes later, backing them into a tight corner early on. Making matters worse, this team was also forced to kill a five-on-three power play, although doing so seemingly provided a spark and motivated them to score three unanswered goals to conclude the first period.
Then in the second period, the Maple Leafs opened the middle frame on the power play thanks to forward @Pierre-Luc Dubois’ penalty, but they still couldn’t find the back of the net with the man advantage. Taking the club’s fourth penalty of the contest, Connor gave Toronto another power-play opportunity early in the third period, however, Winnipeg’s penalty killers prevented them from inching back into this game.

With the Jets aiming to keep pace with the Maple Leafs’ high-scoring offense, they needed their top-six forwards to perform effectively during this contest and Connor certainly led the way for that group, as he served as one of the top offensive weapons through all three periods. Earning 17:40 minutes of ice time, the 24-year-old produced two goals, one assist, three shots on net and a 0.36 xG rate (team-high).
Making his biggest impact of the game in the first period, Connor received a beautiful pass from teammate @Mark Scheifele and ultimately fired it past goaltender @Jack Campbell to provide his team a 2-1 advantage. Later in the opening frame, the former first-round pick attempted to clear the puck out of the defensive zone, but thanks to a tie-up at the blue line from Dubois, his clearing attempt allowed Scheifele to score on a breakaway.

Coming into this game riding a five-game point streak, Ehlers has been one of Winnipeg’s most productive skaters recently and continued his impressive stretch during this showdown against Toronto, scoring his 19th and 20th goals of the season. Along with potting a pair of goals, the 25-year-old also created four shots on net (team-high), three takeaways, one high-danger scoring chance, one hit and a 0.16 xG rate over his 15:20 minutes of ice time.
Opening the scoring for the Jets, Ehlers received a pass across the blue line from defenseman @Neal Pionk and skated down towards the faceoff circle, shooting the puck far-side for a power-play goal. Putting this game away in the third period, the former first-round pick exploded down the ice in a race for the puck against forward @Mitch Marner, ultimately winning the battle and poking the puck through goaltender @David Rittich’s five-hole for the score.

The Jets will receive the day off Thursday and will be back in action against the Edmonton Oilers Saturday at 6 pm CT, it was originally scheduled for 9 pm.
Uncategorized
Recent articles from Thomas Hall