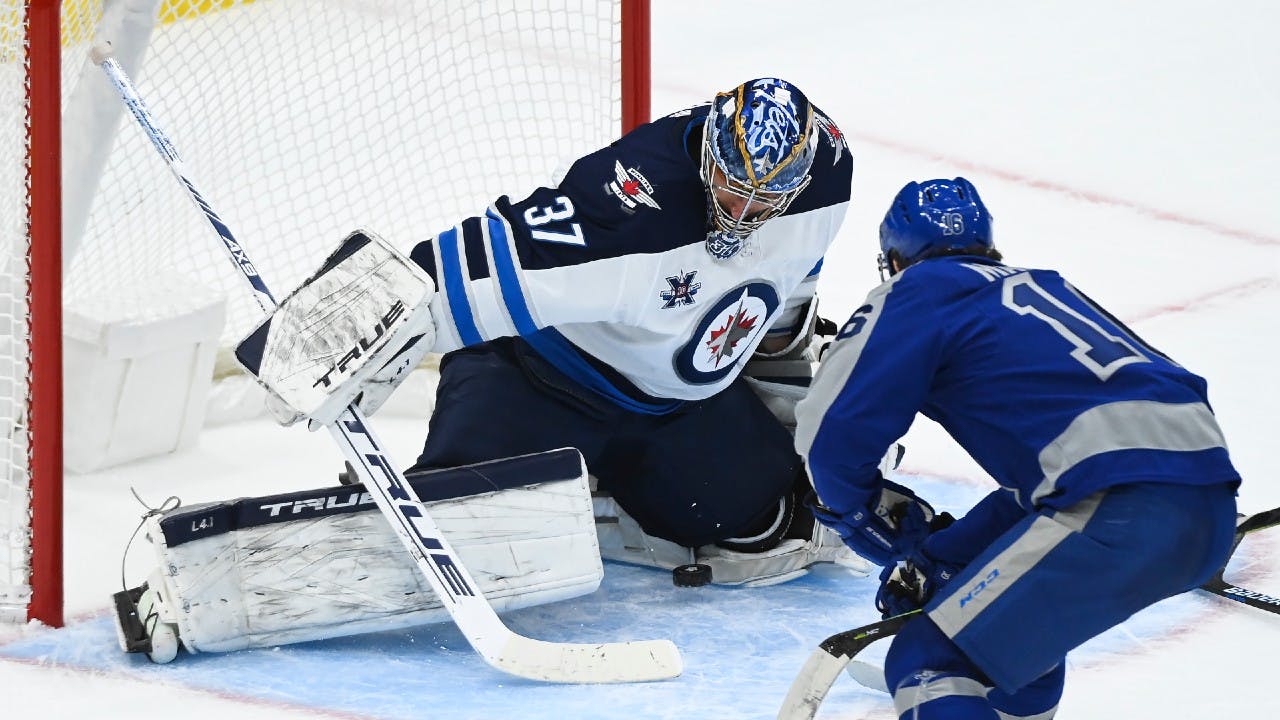 By Thomas Hall
1 year ago
Following a 4-3 victory over the Toronto Maple Leafs on Tuesday, the second game of this three-game series took place on Thursday and proved to be another thrilling showdown, although the outcome certainly didn’t favor the Winnipeg Jets this time around.
Despite holding a 2-1 lead after the second period, which was made possible by a pair of goals from forward @Nikolaj Ehlers, Winnipeg allowed two unanswered goals in the third period and found themselves trailing by one goal late in regulation. But thanks to a clutch goal from veteran @Paul Stastny, this game extended into overtime, although that ultimately allowed forward @Auston Matthews to score the game-winner less than a minute into the extra frame.
Here are three takeaways from the Jets’ 4-3 overtime defeat against the Maple Leafs:

1. Connor Hellebuyck Picking Up Where He Left Off

Coming off his stellar performance from Tuesday, which saw him stop 36 of the 39 shots he faced, goaltender @Connor Hellebuyck certainly didn’t disappoint for an encore as he frustrated Toronto’s skaters for the second straight game on Thursday. Though the 27-year-old couldn’t prevent Matthews’ shot from crossing the goal line, he still stopped 33 of the 36 shots during regulation – including 10 high-danger scoring chances during five-on-five situations.
Making several highlight-reel saves throughout this contest, Hellebuyck kept his team in the game through all three periods and provided them an opportunity to tie things up late in the third period. Considering the 2019-20 Vezina Trophy winner has now faced at least 35 shots in three of his last four starts, it’d make plenty of sense to rest him during the series final on Saturday, especially since he’s started in eight of the last nine games.

After producing a pair of assists on Tuesday night against the Maple Leafs, Ehlers – who currently leads the Jets in goals (13) – took his craft up to another level in the second game of this series and served as one of the club’s top offensive weapons. Performing extremely well during even-strength situations, the 25-year-old scored a team-high three points (two goals and one assist) and also added a pair of shots on net over his 16:13 minutes of ice time.
Scoring his most impressive goal of the game during the second period, teammate @Kyle Connor picked up the puck along the boards and quickly created a two-on-one rush into the offensive zone, ultimately sending a beautiful pass over to Ehlers who one-timed it home for his 13th goal of the season. Along with making a strong impact on the scoreboard, the former first-round pick also showcased a couple of nice defensive plays, and a few poor ones too, including his impressive takeaway on forward @William Nylander in the third period.

Similar to Tuesday night’s showdown, the Jets failed to slow down the Maple Leafs’ high-powered offense on Thursday and defenseman @Neal Pionk was one of the many culprits who struggled to perform effectively in the defensive zone. Though the 25-year-old can’t be blamed for both of the goals his line allowed, he was primarily responsible for @Mitch Marner’s goal in the second period, as the young blueliner lost the puck behind the net and ultimately allowed the goal-scoring winger to tie the game at one apiece.
Then later in the second period, Pionk miscommunicated with teammate @Andrew Copp, allowing forward @Pierre Engvall to scoop up the loose puck and skate down the ice for a breakaway chance on Hellebuyck. While the right-handed defenseman added a secondary assist and a team-high nine hits, his miscues outweighed both of those metrics, as they provided Toronto extra time in the offensive zone and also placed further pressure on the team’s award-winning netminder.

The Jets will receive the day off on Friday and will be back in action against the Maple Leafs on Saturday at 6 pm CT.
Uncategorized
Recent articles from Thomas Hall