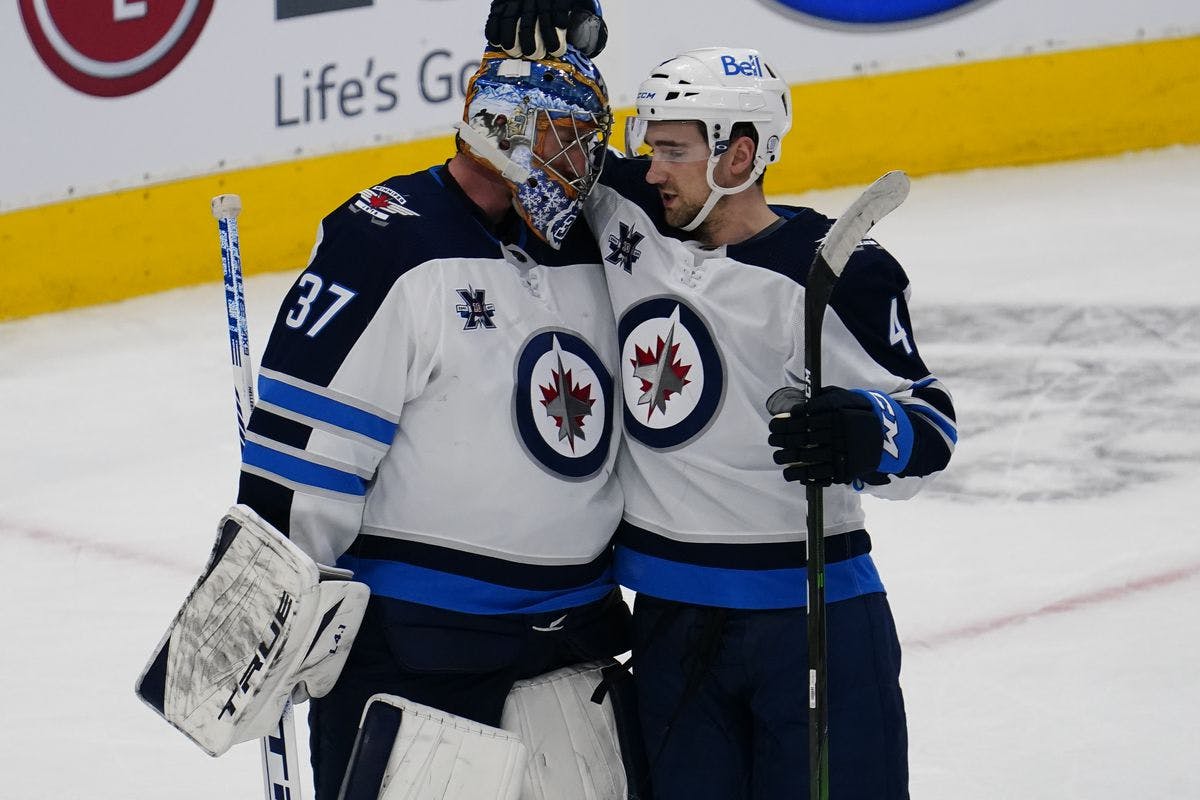 By Thomas Hall
1 year ago
After a miserable 7-1 defeat against the Montreal Canadiens, the Winnipeg Jets needed to immediately flush this disappointing performance and they did exactly on Tuesday night against the Toronto Maple Leafs, which proved to be an extremely entertaining showdown.
Following a high-paced opening period, Toronto carried a 2-1 lead into the second period, although Winnipeg answered back with two unanswered goals from @Kyle Connor and @Josh Morrissey to hand them a 3-2 advantage. While forward @Auston Matthews scored his 20th goal of the season late in regulation, @Mason Appleton’s game-winning goal allowed his team to narrowly escape this contest with a one-goal edge, earning them their 16th victory of the 2020-21 campaign.
Here are three takeaways from the Jets’ 4-3 victory against the Maple Leafs:

Though the Jets have done an excellent job at creating their own offense so far this season, they received a helping hand from the Maple Leafs during all four of their goals on Tuesday. Starting with forward @Andrew Copp’s goal in the first period, defenseman @Jake Muzzin committed an unnecessary hooking penalty on @Mark Scheifele, which ultimately resulted in a power-play goal.
Then in the second period, Winnipeg scored both of its goals off a pair of mental mistakes from Toronto, including a poorly executed line change and an unforced deflection off Matthews’ skate. As for the club’s game-winner, defenseman @Neal Pionk intercepted a pass from @Morgan Rielly in the neutral zone, which turned into a two-on-one rush the other way and allowed Appleton to drive hard to the net for his seventh goal of the season.

2. Lights Out Performance From Connor Hellebuyck

At this stage of his career, it’s not too often we see goaltender @Connor Hellebuyck leaving his net before the final horn sounds, however, that’s what happened on Saturday as he was pulled after allowing four goals on just 19 shots. While the 2019-20 Vezina Trophy winner received very little help from his defense, he still took this defeat to heart and was aiming to get back on track against the Maple Leafs, motivating him to stop 36 of the 39 shots he faced on Tuesday night.
Digging deeper into Hellebuyck’s stellar performance, the 27-year-old stopped all the shots he was expected to as he didn’t allow any low-danger or medium-danger scoring chances to slide past him. Despite facing a ton of pressure in the third period, the 6′ 4″ netminder only let one of the 13 high-danger scoring chances into the back of the net, allowing his team to come away victorious.

3. Lack of Communication in Defensive Zone

Unfortunately, communicating with one another on the ice has been a major issue for Winnipeg’s skaters so far this season, particularly in the defensive zone. Showcasing these struggles against Toronto, their inability to speak to each other resulted in several additional scoring chances for their opponent, which could’ve easily allowed them to tie the game in the third period.
Helping the Maple Leafs score their first goal of the game, defenseman @Nathan Beaulieu and Connor failed to signal who was supposed to clog the middle of the ice, allowing forward @Zach Hyman to skate freely to the front of the net for the score. Committing a similar error late in regulation, teammates @Derek Forbort and Pionk miscommunicated about who was supposed to cover in front of Hellebuyck, leaving Matthews alone in the slot to trim the Jets’ lead to just one goal.

The Jets will receive the day off on Wednesday and will be back in action against the Maple Leafs on Thursday at 6 pm CT.
Uncategorized
Recent articles from Thomas Hall