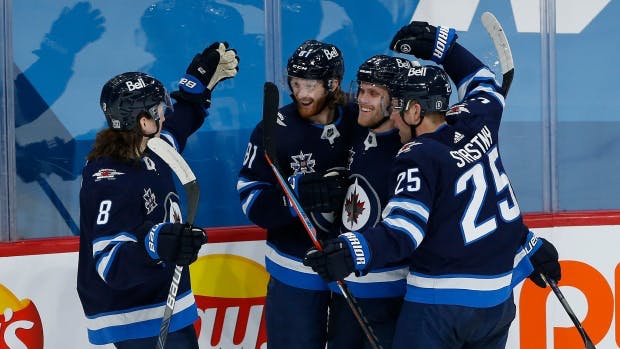 By Thomas Hall
1 year ago
After earning a well-deserved three-day break, the Winnipeg Jets got back to work on Thursday night and were tasked with taking on the Dominique Ducharme-led Montreal Canadiens, which certainly proved to be an extremely competitive showdown.
While forward @Joel Armia scored a pair of goals against his former team in the opening frame, Winnipeg bounced back and potted three goals of their own in the second period – including two goals from forward @Kyle Connor – tying this game up at 3-3 heading into the final 20 minutes. But thanks to a trio of goals from @Nate Thompson, @Pierre-Luc Dubois and @Mark Scheifele, this club held on to a three-goal advantage when the final horn sounded, earning them their third straight victory.
Here are three takeaways from the Jets’ 6-3 victory against the Canadiens:

1. Another Strong Showing From Pierre-Luc Dubois

Coming off his strong return on Sunday night against the Vancouver Canucks, which resulted in two goals and three points, many people were wondering what Dubois would have instore for his encore and he certainly didn’t disappoint as the youngster enjoyed another two-point performance. Adding a goal and an assist, the 22-year-old ultimately put this game out of reach with his third goal in a Jets’ uniform and also created a pair of takeaways as well.
Though Dubois only registered one shot on net against the Canadiens, his lack of shots on net hasn’t prevented him from enjoying success in the offensive zone so far, as he’s scored on all three of his shots since joining his new team. As things currently stand, it’s unclear when coach Paul Maurice will move the former first-round pick back to center, although the top line of @Blake Wheeler, Scheifele and Dubois has certainly been clicking over the last few games. So it might not be the worst idea to keep that trio together for a little bit longer.

With Wheeler, Scheifele and Dubois paired on the top line, Winnipeg’s second line currently consists of @Nikolaj Ehlers, @Paul Stastny and Connor, which served as a pretty productive trio on Thursday against Montreal. Even though this line only created one goal, they displayed plenty of chemistry and several beautiful tape-to-tape passes, ultimately resulting in the club’s second goal of the game.
In particular, this success allowed Connor to create three separate scoring chances during five-on-five situations – including two scoring chances during the opening period. Considering this group has meshed extremely well together in such a short period of time, it seems they’ll be able to continue trending upwards as they gain further experience playing alongside each other.

Since defenseman @Tucker Poolman was held out of the lineup due to an upper-body injury, teammate @Nathan Beaulieu was bumped up to the top defensive pairing alongside @Josh Morrissey, however, the 28-year-old blueliner didn’t exactly step up in a positive way during this matchup against the Canadiens. Despite receiving over 20 minutes of ice time, the veteran defenseman allowed a pair of goals – including one goal on the penalty kill – and nearly committed a delay of game penalty late in the second period.
Without question, the worst moment of Beaulieu’s performance was when he was caught in no man’s land attempting to hit forward @Jesperi Kotkaniemi, resulting in a two-on-one rush and allowed @Tomas Tatar to score a power-play goal in the middle frame. While Maurice has been a fan of the left-hander’s game so far, which is certainly troubling, he’s become a liability in the defensive zone far too often this season and it’d make plenty of sense to swap him out of the lineup in favor of someone like @Logan Stanley or perhaps @Sami Niku.

The Jets are off on Friday and will be back in action on Saturday against the Montreal Canadiens at 9 pm CT, yes, it’s another late-night showdown.
Uncategorized
Recent articles from Thomas Hall