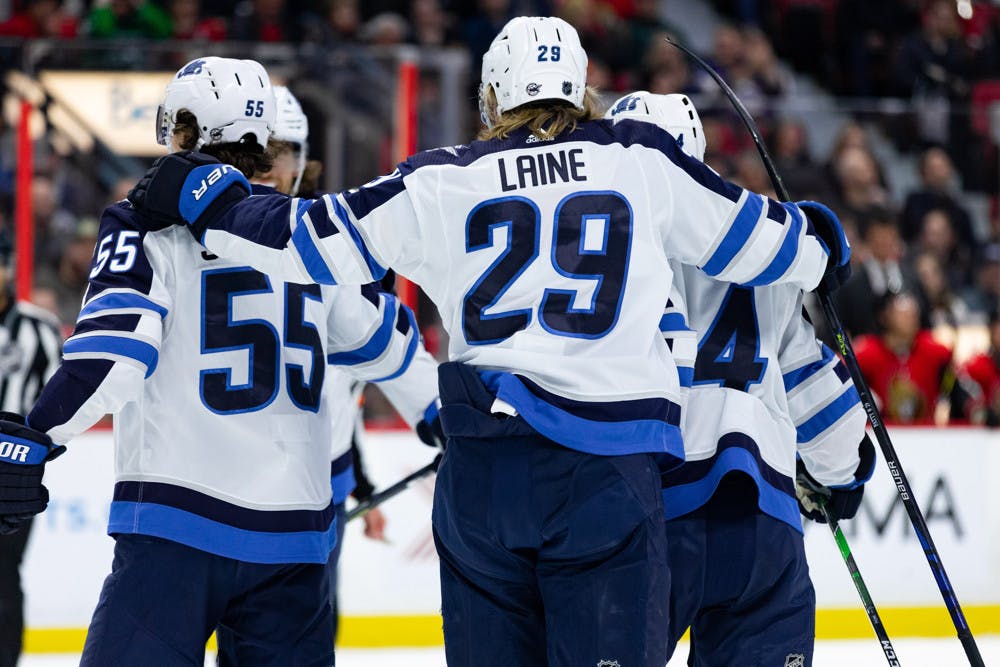 By Thomas Hall
1 year ago
Following a brief 10-day period for training camp, the Winnipeg Jets finally took the ice for their first game of the 2020-21 campaign on Thursday against the Calgary Flames and there’s no question they’re happy with the end result, as they came away with a 4-3 victory.
While things didn’t start well for the Jets, as they trailed by a pair of goals after the first 20 minutes, they answered quickly in the second period by scoring two goals of their own, including one that came just 34 seconds into the period from forward @Mark Scheifele. Thanks to a scoreless final frame, this contest needed overtime, which allowed winger @Patrik Laine to score the game-winner.
Here are three takeaways from the Jets’ season opener:

Though most experts predicted Laine would be suiting up for another team this season, the Jets didn’t end up pulling the trigger on a deal over the off-season and it’s probably a good thing they kept him around, at least for now. Serving as the club’s top offensive player in this regular-season opener, the 22-year old finished with two goals (team-high), three points, three shots on goal, three hits, and also dropped the gloves with forward @Matthew Tkachuk.
Making his presence felt in the opening period, Laine was sprung on a breakaway by teammate @Kyle Connor, allowing him to fire a quick shot past goaltender @Jacob Markstrom, tying the game at one apiece. Along with sending a perfect cross-seam pass to Connor, which set him for a one-timing power-play goal, the 6-foot-5 winger sealed his team’s fate by scoring the game-winning goal in the extra frame.

2. Nikolaj Ehlers is Perfect for the Second Line

After missing Wednesday’s practice due to the league’s COVID-19 protocols, there was certainly a chance Ehlers wouldn’t be allowed to participate in the first game of the season, thankfully he avoided any health concerns and suited up with the Jets on their top line. Though he couldn’t find the back of the net, the 24-year old still added an assist, four shots on net, one hit, and one takeaway over his 17:31 minutes of ice time.
Utilizing his impressive quickness, Ehlers added some-much needed speed to the club’s first line and it certainly made a difference, as he added a spark to his new group and it ultimately led to an early second-period goal for Scheifele. Considering the amount of success this line enjoyed on Thursday, it seems they’ll probably stay together for an extended period of time, which will hopefully result in plenty of more scoring chances as the season progresses.

After splitting 20 games between the Los Angeles Kings and the Flames last season, Forbort signed a one-year, $1 million deal with the Jets over the off-season and was expected to help clean up some of the defensive issues that occurred in 2019-20. Doing just that during his debut, the 28-year old lead the team in blocks (three), and produced one hit along with an assist as well.
Performing extremely well in the defensive zone, Forbort not only helped save a goal in the second period by diving behind goaltender @Connor Hellebuyck, who was out of position, but that same play also helped set up Laine’s first of two goals. Paired with teammate @Neal Pionk, the 6-foot-4 blueliner also helped clear the front of the net for his netminder, which allowed him to make several easy saves during crucial parts of the game.

The Jets will receive a weekend off and are scheduled to face off against the Toronto Maple Leafs on Jan. 18. Then just one day later, they’ll head to the nation’s capital to take on the Ottawa Senators.
Uncategorized
Recent articles from Thomas Hall