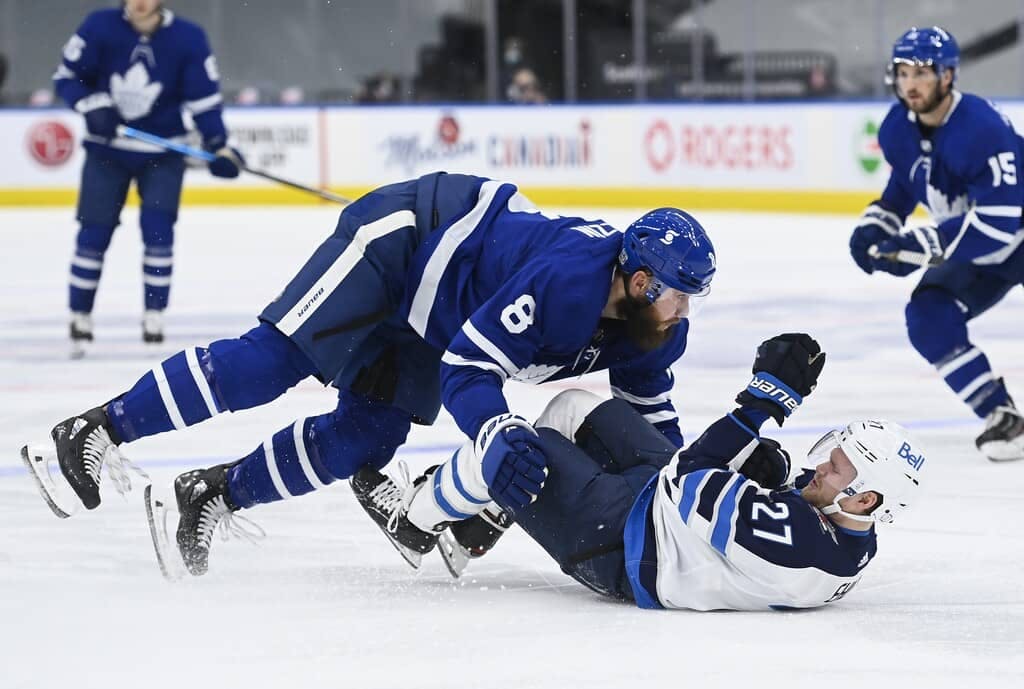 By Thomas Hall
1 year ago
Following a seven-game road trip, which lasted far too long, the Winnipeg Jets returned to Bell MTS Place for the first time since Mar. 17 and were aiming to capture a second consecutive victory over the Toronto Maple Leafs, but things certainly didn’t play out as expected during this Wednesday night showdown.
Falling flat out of the gate, Winnipeg allowed a pair of goals from forwards @Auston Matthews and @Zach Hyman, handing Toronto a 2-0 lead after the first 20 minutes. While the club’s level of intensity increased in the middle frame, they could only sneak one goal past goaltender @Jack Campbell, eventually resulting in their 13th loss of the season.
Here are three takeaways from the Jets’ 3-1 defeat against the Maple Leafs:

Coming off an extremely long road trip, which saw the Jets play seven games in just 12 nights, some fatigue was expected early on but almost no one could’ve predicted the type of ugly performance this team put on during the first period. Allowing the Maple Leafs to dominate in the first 20 minutes, they generated two goals, 14 shots on net, 14 scoring chances, 12 high-danger scoring chances, a 2.16 xGF rate and also received three power-play opportunities, although they didn’t score on any of those chances with the man advantage.
Digging deeper into these first period struggles, Winnipeg allowed nine shots on net, 12 scoring chances and 10 high-danger scoring chances during five-on-five situations. As for their own offensive production during even-strength play, this club only produced four shots on goal, two scoring chances and didn’t create a single scoring chance from a high-danger area, proving to be one of their worst periods of the 2020-21 campaign.

With center @Pierre-Luc Dubois skating alongside teammates @Paul Stastny and @Blake Wheeler once again, the Jets were hopeful this trio would find some success against the Maple Leafs Wednesday, however, they didn’t stay together for long as the team’s captain departed early due to an undisclosed injury. In particular, the 22-year-old struggled to create sustained pressure in the offensive zone, although so did his teammates, as he finished with zero shots on net, created just one scoring chance, lost both of his faceoff opportunities and also recorded a measly 0.11 xG rate over his 15:10 minutes of ice time.
To make matters worse, Dubois also endured an unfortunate incident in the defensive zone during the first period where he collided with defenseman @Derek Forbort in front of the net, leaving Matthews all alone to open the scoring. Since Wheeler’s status for Friday’s game remains unclear, it’ll be very important for the former first-round selection to bounce back strong and help generate additional havoc around the net next time out.

While there weren’t many positives to take away from this losing effort, forward @Nikolaj Ehlers served as one of the lone bright spots for Winnipeg thanks to his noteworthy performance in the offensive zone against Toronto. Despite being held scoreless, the 25-year-old still created two shots on net, two scoring chances, two high-danger scoring chances (tied for team-high), two takeaways, one block and earned a 0.2 xG rate over his 18:57 minutes of ice time.
Making an impact late in the second period, Ehlers utilized his stellar quickness to draw a hooking penalty from defenseman @Jake Muzzin, ultimately leading to a five-on-three power-play opportunity. Then in the third period, the explosive winger showcased his lightning-fast speed once again, carrying the puck along the boards and creating a perfect scoring opportunity for teammate @Kyle Connor, although his shot missed wide to the left of the open net.

The Jets will receive the day off Thursday and will be back in action against the Maple Leafs Friday at 7 pm CT.
Uncategorized
Recent articles from Thomas Hall