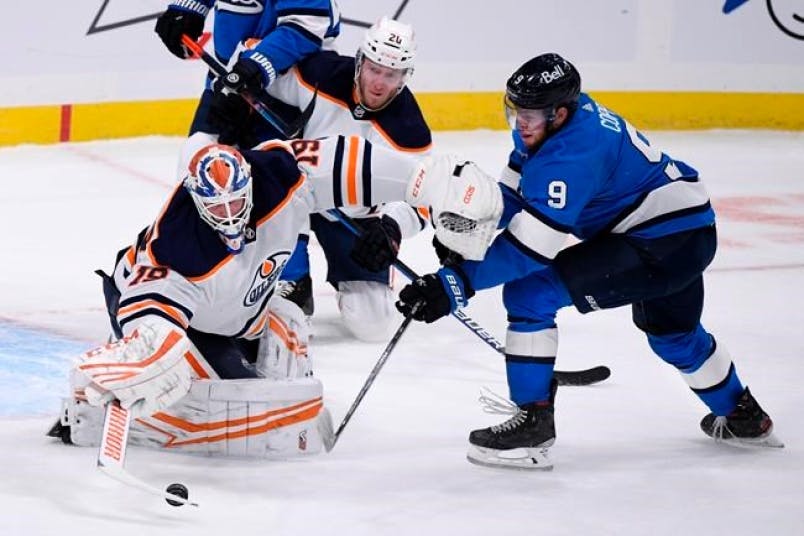 By Thomas Hall
1 year ago
Coming off an action-packed 6-5 victory over the Edmonton Oilers on Monday, the Winnipeg Jets were hoping to capture a second straight win against this team and also extend their winning streak to two games, but they fell just short in both of those areas on Wednesday night.
Striking fast like lightning, Edmonton potted a pair of goals less than five minutes into the opening period, handing them an early 2-0 lead. While forward @Mark Scheifele cut his club’s deficit down to just one goal before the end of the first period, center @Leon Draisaitl scored his second goal of the game in the second period, providing his team a 2-1 edge heading into the final 20 minutes of play.
Despite an early goal from defenseman @Neal Pionk, which was a blast from the point, Winnipeg couldn’t tie the game before the final horn sounded, earning them their sixth loss of the season.
Here are three takeaways from the Jets’ 3-2 defeat against the Oilers:

Heading into Wednesday night’s matchup against the Oilers, the Jets had committed the seventh-fewest number of penalities (50) among all 31 teams in the league. Unfortunately, that promising total increased significantly in this showdown as they were charged with six different penalties – including four infractions in the second period – although a few of those calls probably shouldn’t have been made.
Though this club only allowed one power-play goal, they were shorthanded for 11:11 minutes of the game and spent the majority of the middle frame defending in their own zone. Considering they were pinned in the defensive zone for an extended length of time through the final 40 minutes of this contest, mounting a comeback late in the game understandably became extremely difficult, especially since Pionk was charged with a slashing penalty with just three minutes remaining in regulation.

While forward @Andrew Copp has enjoyed a strong start to the 2020-21 campaign, as he’s currently averaging career-highs in goals per game (0.25) and points per game (0.75), the 26-year-old probably won’t be too pleased with his performance from Wednesday night. Despite earning a season-high 24:26 minutes of ice time, the 6′ 1″ center had three of his four shot attempts blocked and also lost seven of his 10 faceoff opportunities.
Even though Copp blocked three shots (tied for team-high) himself, his ineffectiveness in the offensive zone earned him a short-term demotion to the second line, as teammate @Kyle Connor was briefly positioned on the top line alongside @Blake Wheeler and Scheifele. But since the former fourth-round pick returned to the first line before the end of regulation, it seems he’ll receive plenty of opportunities to break out of his four-game pointless streak on Friday.

After scoring two points (a goal and an assist) on Monday against Edmonton, Winnipeg was counting on Connor to serve as one of the top offensive weapons once again and he definitely tried his hardest to earn his team the victory. Along with generating an assist and a season-high seven shots on net, the 24-year-old also produced six scoring chances and a 0.42 xG, which were both the highest among all skaters from both teams.
Since the majority of this production came with the man advantage, as he created five scoring chances and four shots on net during the power play, this impressive showing hasn’t received a ton of attention. But considering Connor also spent some time on the penalty kill and made a considerable impact during those situations, the former first-round pick probably deserves a lot more recognition for his solid two-way performance.

The Jets will receive the day off on Thursday and will be back in action on Friday against the Canucks at 9 pm CT.
Uncategorized
Recent articles from Thomas Hall