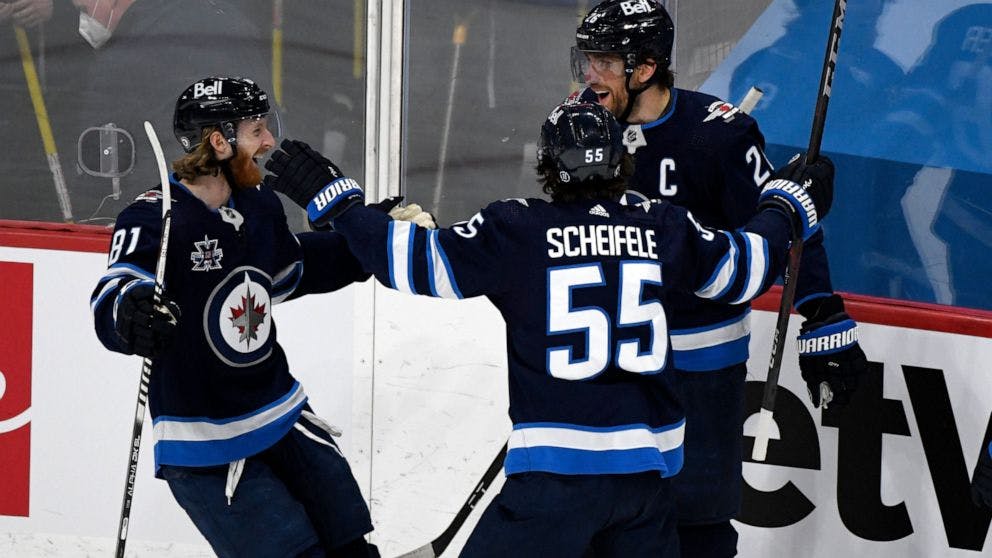 By Thomas Hall
1 year ago
Coming off a disappointing 4-2 defeat against the Ottawa Senators, the Winnipeg Jets’ struggles continued into the first of two games against the Vancouver Canucks, however, they were able to turn things around Tuesday night and finally broke free of their recent scoring woes.
Despite losing 3-1 in the series opener, Winnipeg was determined to end this current slide and came out strong during the first 40 minutes of game two, scoring three unanswered goals and outshooting Vancouver 25-10 over that span. Closing things out in the third period, forwards @Blake Wheeler and @Mason Appleton added two more goals midway through the final frame, helping this team clinch third place in the North Division.
Here are three takeaways from the Jets’ two-game series split against the Canucks:

Heading into this back-to-back series against the Canucks, forward @Kyle Connor had been held scoreless in each of the last seven games, with his last goal coming against the Toronto Maple Leafs back on Apr. 22. Making matters worse, the 24-year-old was struggling to create shooting lanes for himself during that tough stretch and only generated eight shots on goal over those seven contests.
Battling his way out of this offensive drought, Connor exploded in the two games against Vancouver, producing two goals, four points, 11 scoring chances, eight shots on net, five high-danger scoring chances and five rebounds. What’s even more impressive is that all four of his points occurred during five-on-five play, which is an area the left-hander will need to thrive in during the playoffs, especially since this club has scored only one power-play goal over the last seven games.

After signing a four-year, $12 million extension over the off-season, most experts assumed defenseman @Dylan DeMelo would resume his role beside linemate @Josh Morrissey on the top defensive pairing this season. But with coach Paul Maurice taking a more balanced approach, the 28-year-old was forced to spend the majority of the regular season on the third pairing, earning just 13-16 minutes of ice time per game.
Making a much-needed adjustment down the stretch, Maurice finally reunited DeMelo and Morrissey ahead of this series against the Canucks, allowing them to make considerable offensive and defensive impacts. In particular with the veteran blueliner, he was the only defenseman to be on the ice for just one high-danger scoring chance allowed during five-on-five play in game one, and also helped set up Connor’s goal in game two.

Entering this final back-to-back series of the regular season, Wheeler had been riding a six-game point streak – his longest of the campaign – scoring three goals and seven points during that span and looking like his usual self in the offensive zone. While he was held scoreless in the first game against Vancouver, Winnipeg’s captain wasn’t held in check for very long as he bounced back the following night, generating two goals, four points (team-high), three shots on net, three high-danger scoring chances and a 0.36 xG rate during five-on-five situations.
Showcasing his impressive puck-handling skills during the second period, Wheeler took advantage of some open ice on the wing, forcing goaltender @Braden Holtby out of position and ultimately scoring his first goal of the contest. Finding the back of the net in the third period, the Jets’ top line displayed some stellar passing on the fly, as forwards @Mark Scheifele and Connor helped set up a beautiful tic-tac-toe goal for the former first-round selection.

The Jets will receive the next two days off and be back in action against the Toronto Maple Leafs on Friday at 7 pm CT.
Uncategorized
Recent articles from Thomas Hall