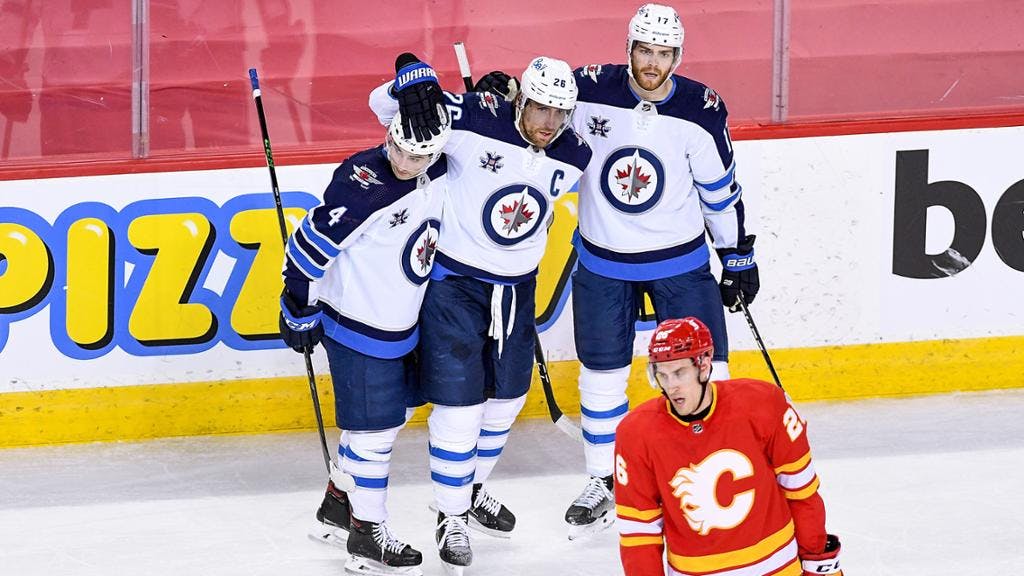 By Thomas Hall
1 year ago
Coming into Wednesday night with a seven-game losing streak, the Winnipeg Jets were desperate to snap this winless stretch and they did just that during this final matchup of the regular season against the Calgary Flames.
Needing to come out strong in the first period, forward @Adam Lowry helped his team set the tone early on, as his ninth goal of the campaign provided Winnipeg a 1-0 lead. Then through the final 40 minutes, this club controlled the flow of the game over the last two periods and added a trio of goals before the final horn sounded, allowing them to earn their first victory since Apr. 15.
Here are three takeaways from the Jets’ 4-0 victory against the Flames:

Appearing in just his second game since returning from a head injury, Lowry didn’t miss a beat during this showdown against Calgary and served as one of the top performers for Winnipeg, making an impact in multiple different ways. Over his 16:45 minutes of ice time, the 28-year-old netted a pair of goals, including his first shorthanded marker of the season, and also produced an assist, three shots on net, two hits, one high-danger scoring chance and a blocked shot.
Making his presence felt out of the gate, Lowry picked up a loose puck in the defensive zone and skated down the wing into the offensive zone, eventually firing a shot past goaltender @Jacob Markstrom for the score just over a minute into the game. Along with scoring on the penalty kill, the left-hander also did an excellent job at disrupting the Flames’ power play, as he created multiple turnovers and largely prevented them from making any clean passes in the defensive zone.

With the Jets desperately needing to turn things around late in the season, they were counting on their talented forward group to help them break out of this recent scoring slump, which has seen this team held to just one goal in four of the last five games, and captain @Blake Wheeler certainly didn’t disappoint. Proving that he’s still got plenty left in the tank, the 34-year-old took his craft up to another level against the Flames, recording two goals, two shots on net, two high-danger scoring chances, one hit and a 0.2 xG rate over his 16:07 minutes of ice time.
Handing Winnipeg a 3-0 lead late in the second period, defenseman @Neal Pionk made a goal-saving clear in the blue paint and his pass ultimately sprung Wheeler on a breakaway, allowing him to extend his point streak to five games. Putting this game away in the third period, the former first-round selection received a perfect pass from teammate @Mark Scheifele and quickly fired it into the back of the net for his fourth power-play goal of 2021, which also earned him his 800th career NHL point.

After being left out to dry over his last six starts, resulting in a 4.40 goals-against average and a .860 save percentage during that span, goaltender @Connor Hellebuyck finally received some help from his teammates and wasn’t forced to carry this team through all three periods. Having said that, the 2019-20 Vezina Trophy winner still made some incredible saves when he needed to, stopping all 32 shots and earning his third shutout of the season.
In particular, the Flames made a strong push during the final frame, creating 17 shots on net and six high-danger scoring chances, but Hellebuyck wasn’t phased by any of those chances and kept their offense scoreless. With just four games remaining in the regular season, it’d make plenty of sense to provide the all-star netminder some rest ahead of the upcoming postseason, however, the 27-year-old would probably want to play each of those contests if the decision was up to him.

The Jets will receive the next two days off and be back in action against the Senators on Saturday at 6 pm CT.
Uncategorized
Recent articles from Thomas Hall