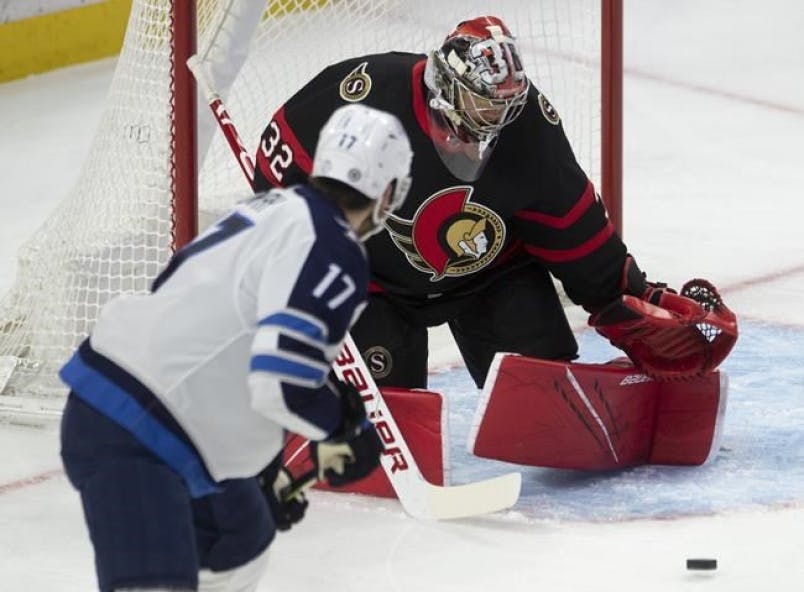 By Thomas Hall
1 year ago
With the calendar changing to May, the Winnipeg Jets were hopeful the new month would bring some much-needed positivity, unfortunately, the opposite has occurred as this team had its losing streak extending to a franchise-worst seven games Monday night.
Facing off against the Ottawa Senators, Winnipeg controlled the flow of the game throughout the majority of the first 40 minutes, and yet, they trailed 1-0 heading into the third period. While defenseman @Josh Morrissey finally broke through to tie the game midway through the final frame, defenseman @Nikita Zaitsev potted the game-winning goal with just over a minute remaining in regulation, proving to be another late-game collapse for this club.
Here are three takeaways from the Jets’ 2-1 defeat against the Senators:

Despite owning the fourth-highest conversion rate (25.0) on the power play heading into Monday’s contest, the Jets’ struggles with the man advantage ultimately proved to be the difference-maker, as they couldn’t convert on any of the six opportunities they received. While this team created 13 shots on net and 10 scoring chances on the power play, only one of those scoring chances came from a high-danger area, which is a major reason they were held scoreless through the first two periods.
Making matters worse, Winnipeg allowed a shorthanded goal during its second power-play opportunity of the game, as defenseman @Neal Pionk couldn’t handle a pass at the blue line and forward @Connor Brown capitalized on that turnover by scoring on a breakaway. Unfortunately, these struggles with the man advantage aren’t limited to just this contest and have seen this club record a 6.3% conversion rate since Apr. 18, tied for third-lowest in the league.

While Winnipeg is known for being a team that struggles to create high-amounts of quality scoring chances, those inefficiencies became exposed during Monday’s matchup against Ottawa, particularly during five-on-five situations. When both teams had five skaters on the ice, the Jets created the majority of their chances at the blue line, resulting in only a pair of high-danger scoring chances during those situations.

Source: NaturalStatTrick.com
Considering this club earned 10:44 minutes on the power play, it’s completely unacceptable to register just one quality scoring chance and it’s even worse to produce zero of them through the final two periods. Adding insult to injury, the Senators’ penalty kill created one high-danger scoring chance, which they scored on, and were clearly the better team from start to finish.

Though Monday’s contest against the Senators didn’t feature many positives for the Jets, they did receive an unexpected, but impressive, offensive showing from Morrissey. Earning 24:27 minutes of ice time, the 26-year-old scored his team’s only goal and produced nine shots on net (career-high), seven scoring chances, four blocks, two hits and a team-high 0.2 xG rate during five-on-five play.
Coming through with a game-tying goal in the third period, Morrissey received a pass from Pionk and skated down into the slot, eventually firing the puck on goal and having it just squeak past goaltender @Filip Gustavsson for the score. While the former first-round pick’s slashing penalty did eliminate a power-play opportunity in the middle frame, resulting in some brief four-on-four play, there’s no question he made one of the biggest impacts for Winnipeg throughout this contest.

The Jets will receive the day off Tuesday and be back in action against the Calgary Flames on Wednesday at 8:30 pm CT.
Uncategorized
Recent articles from Thomas Hall