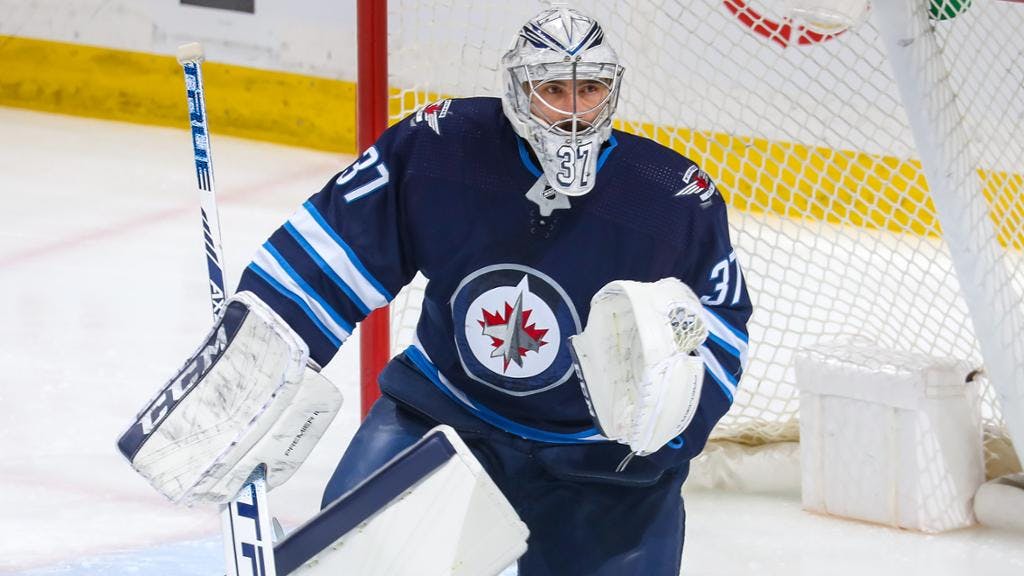 By Thomas Hall
1 year ago
After allowing the game-winning goal late in regulation against the Calgary Flames on Tuesday, the Winnipeg Jets were left with a bad taste in their mouths and were striving to get back on track during their 13th game of the season, although they first had to surge past the Ottawa Senators.
Even though the Jets had already defeated the Senators three separate times this season, this matchup proved to be extremely challenging early on, as they were largely outplayed and also committed numerous mistakes in the opening period. Despite those issues, the score remained tied at zero heading into the second period, which allowed this team to score three unanswered goals and ultimately came away with a 5-1 victory.
Here are three takeaways from the Jets’ 5-1 victory against the Senators:

Coming off a tough loss against the Flames, the Jets needed goaltender @Connor Hellebuyck to enjoy another solid performance and he certainly didn’t disappoint as this victory was made possible because of his near-perfect outing. Keeping his team in the game through the first 20 minutes, the 27-year-old bailed his teammates out several different times and made 18 saves during that span – including nine high-danger scoring chances.
Without this lights-out performance in the opening frame, this club could’ve easily trailed by multiple goals heading into the second period, and yet, they led by three goals with just 20 minutes left to play. In total, Hellebuyck faced a season-high 42 shots and made 41 saves, as his potential shutout was snapped with just over eight minutes remaining in regulation.

Falling flat out of the gate, the Jets were dominated by the Senators in the first period on Thursday night, although this team was also extremely careless with the puck through all three periods. As a result of committing 12 turnovers, they couldn’t slow down their opponent from creating 47 scoring chances, which probably should’ve resulted in more than just one goal.
Leading Winnipeg with two turnovers in this game, defenseman @Derek Forbort failed to control the puck at times and one of his mishaps provided Ottawa with a breakaway opportunity midway through the third period. Unfortunately, playing clean with the puck has been a major issue for this organization so far this season, as they’re currently tied for the fifth-most turnovers (142) among all 31 teams in the league, which is something they’ll need to correct moving forward.

After scoring one goal and three points back on Jan. 23 against the Senators, forward @Paul Stastny served as a valuable offensive weapon against them once again, as he potted his third goal of the season and also added an assist on Thursday. Providing a much-needed spark early in the second period, teammate @Mason Appleton recovered the puck down low in the offensive zone and passed it to the veteran forward who was parked in front of the net for an easy tap-in goal.
Making an impact on the power play late in the middle frame, Stastny scooped up the rebound from defenseman @Josh Morrissey’s blast from the point and sent it across the ice to captain @Blake Wheeler for the team’s third goal of the game. Even though the 35-year-old was moved out to the wing during this showdown, he still received three faceoff opportunities and won two of them, which improved his overall faceoff percentage to 52.2%.

The Jets will receive the day off on Friday and will be back in action on Saturday afternoon at 2 pm CT.
Uncategorized
Recent articles from Thomas Hall