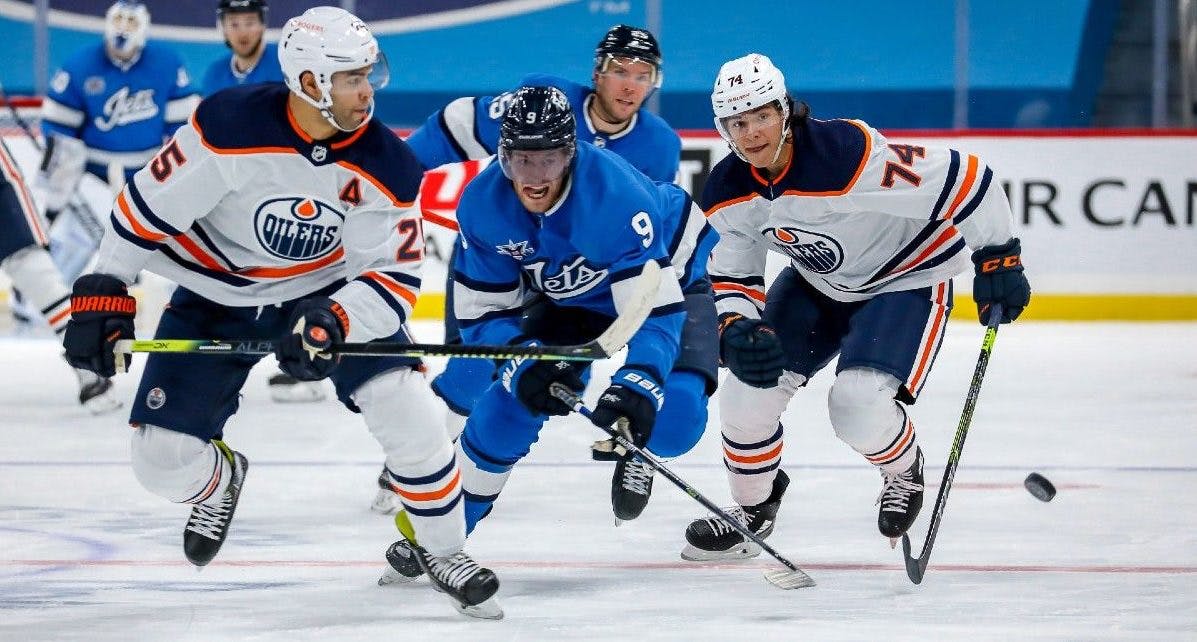 By Thomas Hall
1 year ago
After being embarrassed by the Edmonton Oilers during Monday’s contest, which resulted in a 6-1 defeat, the Winnipeg Jets knew they needed to turn things around Wednesday night, and for the most part, they accomplished that feat.
Though Winnipeg was fairly effective during five-on-five play in the opening 20 minutes, defenseman @Tyson Barrie capitalized on a power-play opportunity midway through the first period, handing Edmonton a 1-0 lead entering the middle frame. While captain @Blake Wheeler potted his 11th goal of the season, forward @Ryan Nugent-Hopkins scored on the power play just two minutes later and his marker ultimately proved to be the game-winner.
Here are three takeaways from the Jets’ 3-1 defeat against the Oilers:

Considering Edmonton featured the third-highest conversion rate (26.0%) on the power play heading into Wednesday’s matchup, the Jets needed to remain disciplined throughout all three periods, however, they failed to do so and it ultimately cost them the game. Struggling to stay out of trouble, Wheeler earned six minutes in penalties and that allowed the Oilers to score two of their three goals with the man advantage.
Earning his first penalty midway through the first period, the 34-year-old was called for a tripping infraction on forward @Kailer Yamamoto, providing Barrie an opportunity to break the game’s scoreless tie. Then in the second period, the veteran forward was nailed with a double-minor, high-sticking penalty on defenseman @Ethan Bear, allowing Nugent-Hopkins to hand his club a 2-1 edge.

With winger @Nikolaj Ehlers sidelined for the rest of the regular season, the Jets were counting on someone to step up in his absence and forward @Andrew Copp certainly didn’t disappoint, as he served as one of the top offensive skaters Wednesday night. Skating on the top line alongside teammates @Mark Scheifele and @Mason Appleton, the 26-year-old received 22:36 minutes of ice time, producing one primary assist, six scoring chances, five shots on net, three high-danger scoring chances, two rebounds, two takeaways and a 0.98 xG rate (team-high).
Helping his team score its first goal of the game, Copp created a turnover down low in the offensive zone and quickly found Wheeler wide-open in the slot, who fired the puck home for the score. If not some impressive saves from goaltender @Mikko Koskinen, who stopped 25 of the 26 shots he faced, the former fourth-round selection would’ve surely scored his 16th goal of the season and may have been able to extend this contest beyond regulation.

Prior to Wednesday’s showdown against the Oilers, coach Paul Maurice revealed there wouldn’t be any lineup changes made before puck drop, although the second and third lines underwent a tiny shakeup out of the gate. Looking to provide a spark to the second line, the Jets moved veteran @Paul Stastny up alongside teammates @Kyle Connor and Wheeler, but this trio struggled to defend as they allowed 12 scoring chances, seven shots on net and two high-danger scoring chances.
As for the third line, forward @Pierre-Luc Dubois thrived with his new linemates, in @Mathieu Perreault and @Kristian Vesalainen, as this group generated the second-highest CF% (40.0%), FF% (50.0%), xGF% (36.7%) and SCF% (40.0%). While this trio probably won’t stay together for much longer, as forward @Adam Lowry’s eventual return will force the coaching staff to realign the forward lines once again, it’s still very encouraging to see the former Columbus Blue Jacket feeling very comfortable at this point of the season.

The Jets will receive the day off Thursday and will be back in action against the Montreal Canadiens on Friday at 6 pm CT.
Uncategorized
Recent articles from Thomas Hall