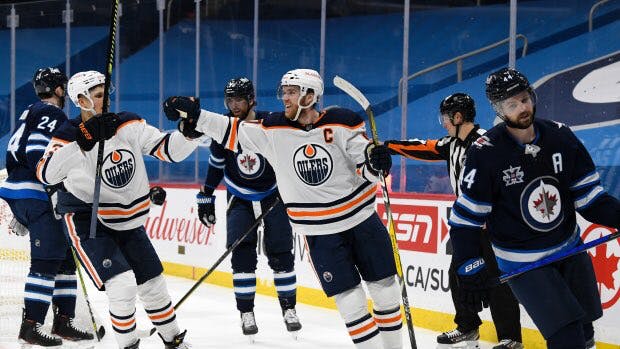 By Thomas Hall
1 year ago
Following back-to-back losses against the Toronto Maple Leafs, the Winnipeg Jets came into Monday’s game looking to end their current three-game losing streak, however, another forgettable performance against the Edmonton Oilers has now extended that streak to four games.
Failing to finish strong in the opening 20 minutes, Edmonton scored a pair of goals with less than five minutes remaining in the first period, handing them a 2-0 lead entering the middle frame. Unfortunately for Winnipeg, things took a turn for the worse in the second period, as they allowed four goals while netting just one of their own, putting this contest out of reach before the third period began.
Here are three takeaways from the Jets’ 6-1 defeat against the Oilers:

After struggling to defend in transition during the two-game series against the Maple Leafs, the Jets carried those issues into Monday night’s contest against the Oilers, who made them pay on the fly nearly all game long. Capitalizing on turnovers in the offensive zone, Edmonton scored five of its six goals in transition, proving to be the difference-maker throughout this matchup.
In particular, three of the Jets’ seven giveaways in the game occurred at the blue line in the offensive zone and all three of those turnovers ultimately led to goals for their opponent. While this team is currently without two of its top defending forwards (@Adam Lowry and @Nikolaj Ehlers), they still need to find a way to correct these woes moving forward or it could become a serious problem that potentially carries over into the playoffs.

2. Winnipeg’s Skaters Caught Out of Position Too Often

Along with underperforming in transition, the Jets were also positioned in the wrong spots far too often during this losing effort against the Oilers, proving to be another major factor that led to this embarrassing defeat. Whether it was a lack of effort or communication, which has been a huge issue for this team all season long, they provided their opponent with plenty of room to work in both the neutral and offensive zones.
Showcasing this issue during the game’s opening goal, @Tucker Poolman, @Derek Forbort and @Nate Thompson all skated behind the net to fight for possession, leaving veterans @Adam Larsson and @Alex Chiasson at the top of the slot to easily find the back of the net. Then in the second period, Winnipeg left captain @Connor McDavid all alone in the neutral zone while they changed lines – that’s a mistake that should never happen – allowing him to score his second of three goals in the contest.

With Lowry and Ehlers out of the lineup, the Jets were forced to shuffle their forward lines ahead of Monday’s contest, providing forward @Mason Appleton an opportunity to skate on the top line alongside teammates @Andrew Copp and @Mark Scheifele. Serving as one of the lone bright spots, the 25-year-old didn’t make an impact on the scoreboard, although he did create a career-high seven shots on net, five high-danger scoring chances, one hit, one block and a 0.58 xG rate (team-high) during five-on-five play over his 21:07 minutes of ice time.
Digging deeper into Appleton’s impressive showing, the young winger earned 3:01 minutes of ice time on the club’s top power-play unit, creating two shots on net, two scoring chances, one high-danger scoring chance and one rebound during that span. While it may be a little early to be thinking about this summer’s Seattle Kraken Expansion Draft, there’s no question this larger role could increase the former sixth-round pick’s chances of playing elsewhere next season.

The Jets will receive the day off Tuesday and will be back in action against the Oilers Wednesday at 8 pm CT.
Uncategorized
Recent articles from Thomas Hall