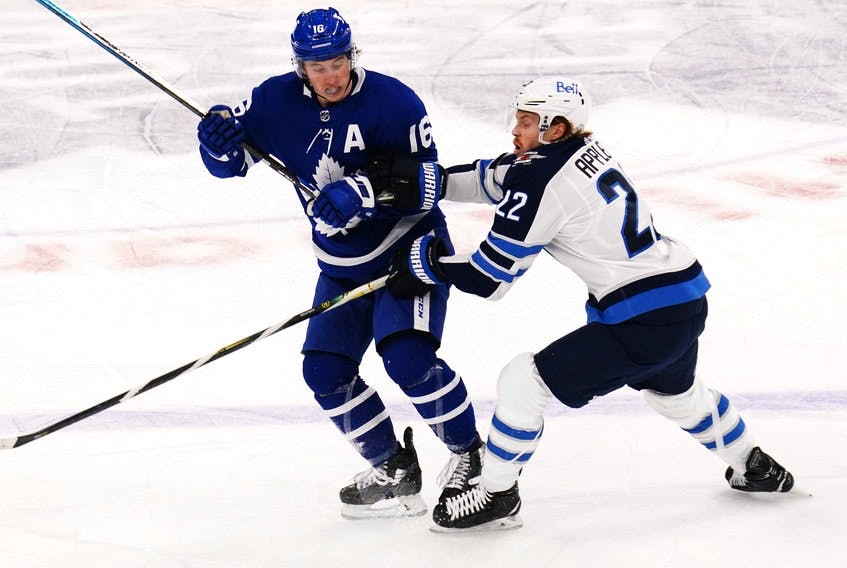 By Thomas Hall
1 year ago
Coming off a four-day break, which was originally scheduled to be a three-day break, the Winnipeg Jets finally returned to action Thursday and opened a two-game series against the North Division-leading Toronto Maple Leafs.
Thanks to an action-packed first period, Toronto carried a 3-2 lead into the middle frame and ultimately maintained a one-goal edge heading into the final 20 minutes. While Winnipeg tried to claw back into this contest, forward @Mitch Marner’s empty-net goal put this game away, handing his team its 29th victory of the season.
Here are three takeaways from the Jets’ 5-3 defeat against the Maple Leafs:

If you tuned in late to this game… first, shame on you. Second, you missed a ton of scoring early on. Striking fast like lightning, forwards @Auston Matthews and @Wayne Simmonds both found the back of the net less than two minutes into the first period, earning the Maple Leafs a 2-0 advantage.
Then just two minutes later, forward @Mark Scheifele put the Jets on the board, scoring his 18th goal of the season. Helping his team erase its horrible start, teammate @Andrew Copp tied the score at 2-2 midway through the period thanks to his 15th goal of the year. Unfortunately, veteran @Jason Spezza tipped home his 10th goal of 2021 less than two minutes later, allowing Toronto to enter the second period with a 3-2 lead.

After practicing with the Jets during their mini-bye week, coach Paul Maurice decided it was time for defenseman @Jordie Benn to make his debut, and looking back on his performance, inserting him into the lineup against the Maple Leafs probably wasn’t the right decision. Earning just 11:30 minutes of playing time, the 33-year-old was on the ice for two goals allowed – including two of the three in the opening period.
Proving to be responsible for Spezza’s goal, Benn glided up the ice towards the top of the faceoff circle, leaving the veteran forward all alone in front of goaltender @Connor Hellebuyck to easily deflect the puck past him. Then in the second period, the former Vancouver Canuck fell down behind the net while attempting to retrieve a dump in, providing captain @John Tavares a scoring opportunity on a wrap-around attempt.

It may have been hard to tell, but forward @Mason Appleton had gone the last five games without registering a single point entering Thursday’s contest, scoring his last point back on Apr. 8 against the Montreal Canadiens. Luckily for Winnipeg, the 25-year-old picked the perfect night to break out of his scoring slump, as he helped create each of the team’s first two goals in the first period.
Chasing after a dump in, Appleton generated a turnover in the corner and sent the puck over to Copp, who eventually fired a pass over to Scheifele for the score. Later in the period, the former sixth-round pick scooped up a loose puck in front of Toronto’s net and sent it over to his linemate once again, earning Copp his first goal since Apr. 10.

The Jets will receive the day off Friday and will be back in action against the Maple Leafs Saturday at 6 pm CT.
Uncategorized
Recent articles from Thomas Hall