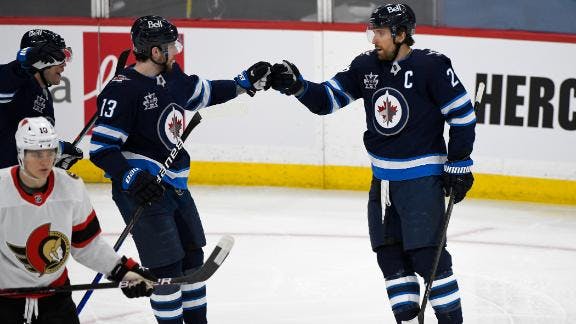 By Thomas Hall
1 year ago
After losing two straight games against the Toronto Maple Leafs, the Winnipeg Jets were aiming to get back on track against the bottom-feeding Ottawa Senators Monday night and they did exactly that by dominating in several different ways through 60 minutes.
Despite committing a trio of penalties in the opening period, Winnipeg controlled the flow of the game during even-strength situations, resulting in seven high-danger scoring chances and a goal from forward @Pierre-Luc Dubois. Thanks to three goals in the second period, Winnipeg was able to hold onto a 4-3 advantage when the final horn sounded in the third period, earning them their 23rd victory of the season.
Here are three takeaways from the Jets’ 4-3 victory against the Senators:

1. Another Noteworthy Performance From Andrew Copp

Scoring the only goal against Toronto on Apr. 2, forward @Andrew Copp served as one of the lone bright spots during that losing effort and continued his recent offensive surge Monday against Ottawa. Along with producing a pair of assists, which set a new career-high in points (30), the 26-year-old also created three shots on net, three high-danger scoring chances (team-high), two rebounds and a 0.65 xG rate over his 19:12 minutes of ice time.
Making his biggest impact in the second period, Copp stole the puck along the boards in the offensive zone, ultimately sending it over to teammate @Adam Lowry for the score. Later in the middle frame, the former fourth-round pick received a pass from winger @Nikolaj Ehlers and quickly sent it across the ice to Dubois, who fired the puck home for a power-play goal.

Entering this game with just one goal and two points over the last seven games, the Jets badly needed Dubois to put his recent scoring woes behind him and start producing more consistently, especially since the club’s second line has been struggling to create offense lately. Despite posting just one high-danger scoring chance against the Senators, the 22-year-old still found the back of the net two separate times and also won nine of his 11 faceoff opportunities as well.
Scoring the game’s first goal less than three minutes into the first period, captain @Blake Wheeler retrieved a loose puck from behind the net and passed it out in front to Dubois, who snipped it past goaltender @Anton Forsberg. Then in the second period, the former first-round was perfectly positioned on the wing to receive a pass from Copp, allowing him to register his first power-play goal with the Jets.

While Winnipeg is comfortable playing from behind, as they’re currently tied for the most wins (four) when trailing after the second period this season, holding onto a lead late in games has proven to be challenging at times as they’ve lost three games when leading at the beginning of the third period. Nearly extending that number to four games, this team held a 4-1 edge heading into the final 20 minutes Monday night and almost allowed Ottawa to tie the game.
With rookie @Logan Stanley charged with a roughing penalty midway through the final frame, this power-play opportunity ultimately allowed forward @Josh Norris to trim Ottawa’s deficit to just two goals. Then with less than five minutes remaining in regulation, forward @Connor Brown made this just a one-goal game, luckily, goaltender @Connor Hellebuyck shut the door the rest of the way.

The Jets will receive the next two days off – they better enjoy this time off – and will be back in action against the Montreal Canadiens Thursday at 6 pm CT.
Uncategorized
Recent articles from Thomas Hall