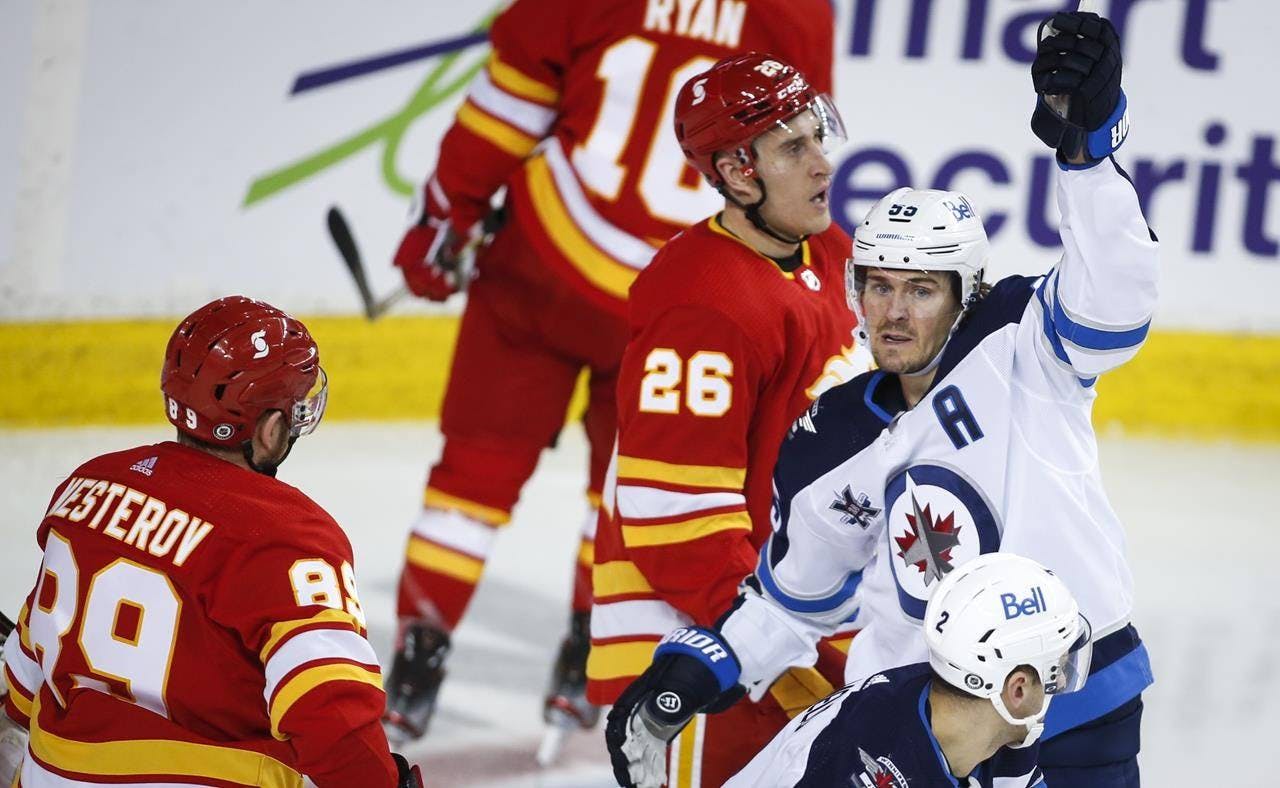 By Thomas Hall
1 year ago
Following a 4-2 defeat Saturday, the Winnipeg Jets received a much-needed day off Sunday to recovery from their recent back-to-back series and were back on the ice Monday night for a third straight game against the Calgary Flames, however, things went much smoother this time around.
While forward @Elias Lindholm opened the scoring for Calgary, Winnipeg finished strong in the first period by scoring a pair of goals during the final five minutes, handing them a 2-1 lead heading into the middle frame. Dominating through the final 40 minutes, forwards @Mark Scheifele, @Andrew Copp and @Pierre-Luc Dubois put this game out of reach long before the final horn sounded, earning this team their 22nd victory of the season.
Here are three takeaways from the Jets’ 5-1 victory against the Flames:

While the Jets didn’t decide to make any lineup changes prior to Monday’s contest, coach Paul Maurice pulled a fast one on all of us and shuffled the top six forwards shortly after puck drop, as Scheifele and Dubois swapped places. Though this shake-up didn’t have a major impact on the top line, which featured forwards @Paul Stastny, @Blake Wheeler and Dubois, it did dramatically improve the club’s second line through all three periods.
Along with scoring a pair of beautiful goals, this newly formed second line, featuring @Nikolaj Ehlers, @Kyle Connor and Scheifele, also generated a team-high 0.74 xGF rate, six scoring chances and two high-danger scoring chances. Despite allowing 10 shots on goal and five high-danger scoring chances, this dominant trio created additional chemistry as the game progressed, suggesting they’ve earned another opportunity to skate alongside each other next game against the Toronto Maple Leafs.

Despite averaging the third-fewest penalty minutes per game (6:53) this season, Winnipeg failed to stay out of trouble during this showdown against Calgary, resulting in four separate trips to the penalty box. While this team only allowed one power-play goal Monday, they could’ve surrendered far more than that as they gave up 11 shots on net, 10 scoring chances, six high-danger scoring chances and a 1.41 xGA rate on the penalty kill.
But thanks to several key saves from goaltender @Connor Hellebuyck, including seven in the opening period, the Jets survived three of their four penalties and were ultimately able to take over this game. Having said that, it’ll be crucial to play much cleaner moving forward, especially since the Maple Leafs currently own the sixth-highest conversion rate (26.0%) with the man advantage.

Though defenseman @Dylan DeMelo is known for his stellar defensive attributes, the 27-year-old made a surprising impact at both ends of the rink Monday, having a direct impact on three of Winnipeg’s five goals. In total, the veteran blueliner earned 19:35 minutes of ice time, his highest total since Mar. 17, creating one primary assist and an on-ice xGF rate of 0.95, which was the highest among all of his teammates, according to NaturalStatTrick.com.
Helping the Jets score their fourth goal of the contest, DeMelo created a turnover at the blue line in the defensive zone, allowing Ehlers to create a line rush into the offensive zone before sending a perfect pass over to Copp for the score. Replicating this same effort in the third period, the 6′ 1″ defenseman helped Wheeler exit the defensive zone cleanly and set him up for an easy entry into the offensive zone, ultimately leading to a Dubois’ seventh goal of the season.

The Jets will receive the day off Tuesday and will be back in action against the North Division-leading Maple Leafs Wednesday at 6:30 pm CT.
Uncategorized
Recent articles from Thomas Hall