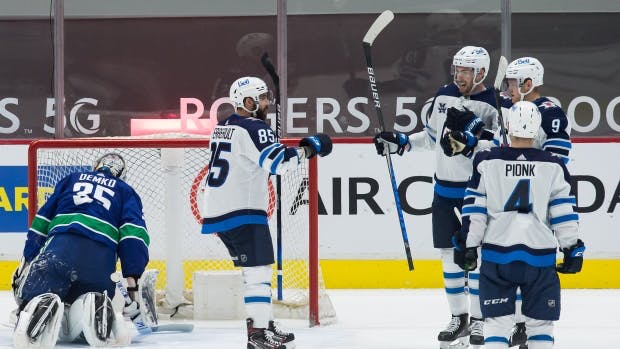 By Thomas Hall
1 year ago
Following a 4-0 victory on Monday, the Winnipeg Jets were attempting to capture their fifth win of the season against the Vancouver Canucks Wednesday night and they did exactly that at Rogers Arena, completing the two-game series sweep and awarding them the season series.
Similar to the first game of this two-game series, neither team found the back of the net in the opening period, keeping this matchup tied heading into the middle frame. But thanks to four goals from forward @Andrew Copp, which included two power-play markers, Winnipeg ran away with this game in the third period, however, they couldn’t help goaltender @Connor Hellebuyck earn consecutive shutouts for the first time in his career.
Here are three takeaways from the Jets’ 5-1 victory against the Canucks:

After enjoying a red-hot start to the season, resulting in four goals and 12 points through the first 12 games, Copp cooled off once teammate @Pierre-Luc Dubois returned from his injury and had scored just two goals and nine points over the last 20 games heading into Wednesday’s showdown. That being said, Vancouver failed to slow down the 26-year-old as he finished with a career-high four goals and became just the fourth forward in franchise history to accomplish that feat since the team returned to Winnipeg.
Along with serving as the leading scorer, Copp also produced four shots on net, three scoring chances, three high-danger scoring chances and finished with a team-high 0.99 xG rate. Though the majority of his production came with the man advantage, the left-hander still proved to be effective during even-strength situations, earning him a 0.63 xG rate – a truly impressive performance for the impending restricted free agent.

Similar to last season, the Jets have found themselves relying heavily on their all-star goaltender once again and the 2019-20 Vezina Trophy winner certainly hasn’t let them down, as Hellebuyck currently owns the fourth-most wins (15) and ranks inside the top-25 in both goals-against average and save percentage among all qualified netminders, according to NHL.com. Helping his team capture their 20th win of the season, the 27-year-old stopped 38 of the 39 shots he faced and was just 85 seconds away from earning his second straight shutout.
Digging deeper into Hellebuyck’s stellar performance, he faced an enormous amount of pressure in the second period, facing 20 shots on net, 17 scoring chances and 10 high-danger scoring chances, only to stop every single chance against him. While the former fifth-round pick had a few pucks deflect off the post, he made several key saves throughout this contest and was one of the main reasons his club came away victorious, which probably isn’t a major surprise to anyone at this point.

After earning a career-high 16:28 minutes of ice time in the first game of this series against the Canucks, it seemed rookie @Logan Stanley was starting to earn more confidence from coach Paul Maurice and the towering defenseman proved once again why he deserves to play more than just 10 minutes per game, as he provided a much-needed spark Wednesday night.
With very little action in the first period, Stanely decided to drop the gloves with forward @Zack MacEwen and it seemingly provided some energy to the Jets’ skaters, helping them score three unanswered goals in the second period. In addition to his first career NHL fight, the 22-year-old blueliner also finished tied for the fewest scoring chances allowed, tied for the second-best xGA rate (0.38) and led all Winnipeg’s defensemen in shots on goal (three).

The Jets will receive the day off on Thursday and will open a back-to-back series against the Calgary Flames on Friday at 9 pm CT.
Uncategorized
Recent articles from Thomas Hall